An ideal view of an LST: 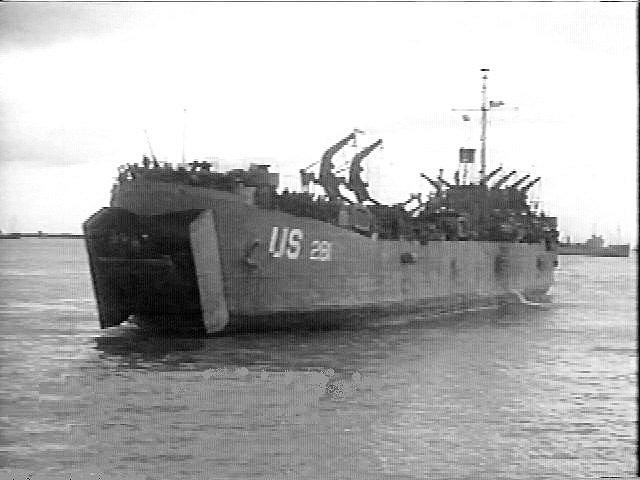 It is ideal because we see the ramp open, as much as anything else. This is how an LST is supposed to work.

Then there is this inadvertently revealing ad. Nominally, this LST is to be unloaded by an elevator running from top to bottom deck, out through the bow doors via the ramp, and down across the beach. From up here, it seems a bit dubious. Things will get wet, and from this angle I am not even sure that all of the deck load is on vehicles in the first place. (If it is, it is a somewhat impractical way of moving supplies.) 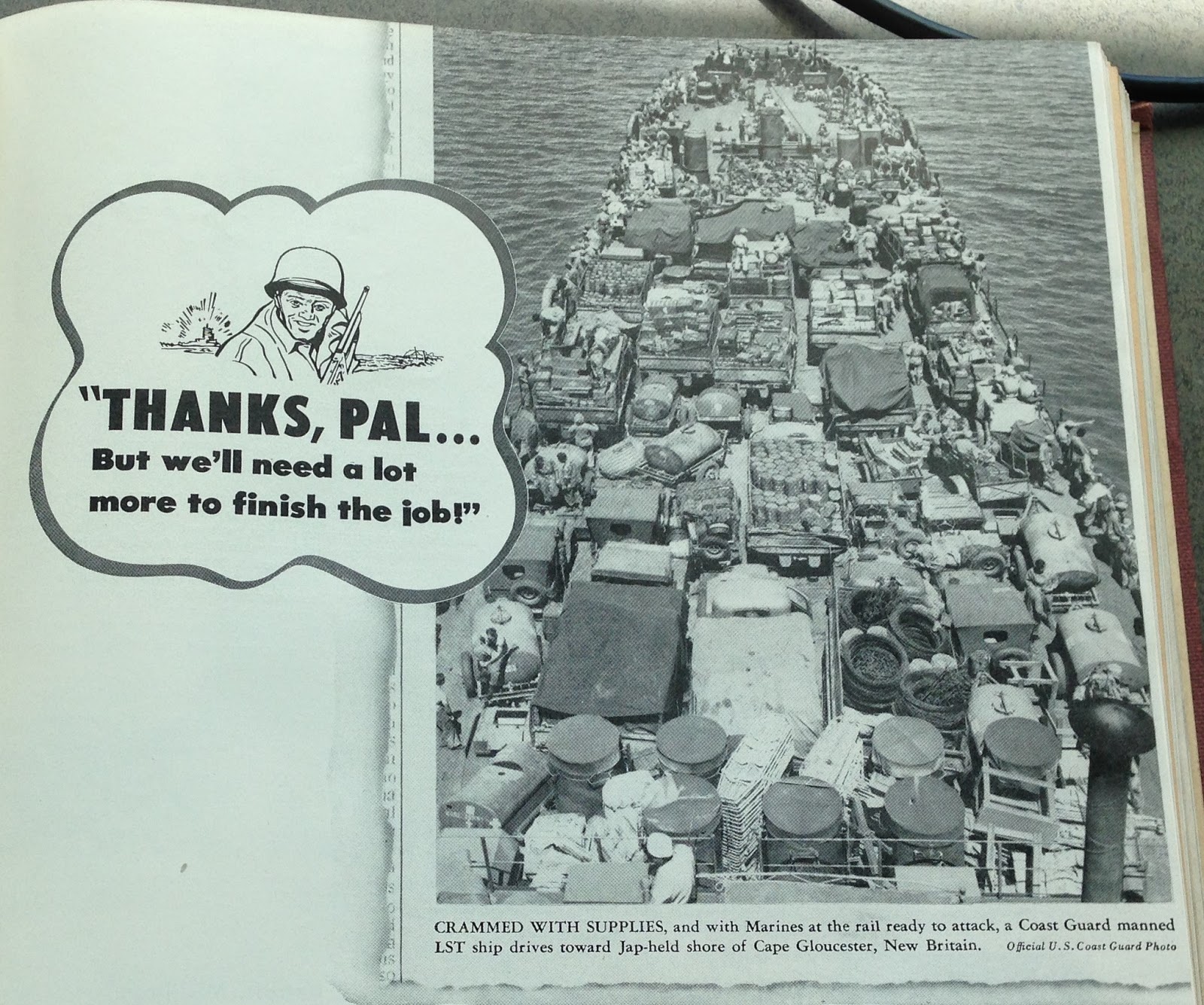 
That's the Wikipedia specification box, of course. I am such a plagiariser. I provide the link so that you can go there. Scroll down through the boxes, and you will see irrelevant information steadily being pared away. The first box includes the number of cranes carried on the original Lake Maracaibo-type LSTs. By the time that the workhorse LST(2) is reached, almost a third of the text box lines are dedicated to the LST's GUNS. Guns are cool. If it were not for the official US Navy photo above, it would not even be clear that the LST's that are about to ram the beaches of Normandy have cranes. They do. Unloading is hard. 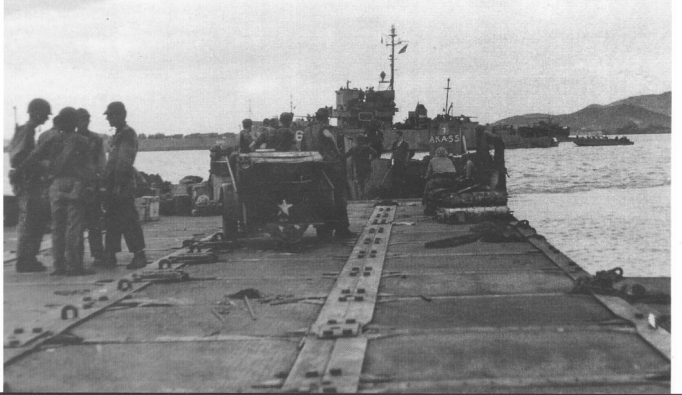 In search of official photographs, I came up with this one of a landing structure at Inchon in 1950. I think that what is happening here is that an LCT is unloading an attack transport via a temporary pontoon wharf. These men are getting to Korea on a jeep that was carried from an LCT to a pontoon from an attack transport. Call what you like, but do not call this efficient.


Speaking of plagiarism, one more, as it can't hurt. (The source turns out to be Norman Friedman's U.S. Amphibious Ships and Craft. If you're going to plagiarise, go for the best.) To put it in perspective, an LST is the length of a Fletcher-class destroyer, more or less. (If you want a more accessible analogy, consider a British Columbia Great Circle summer vacation!) It is much wider, and taller, albeit with a far smaller draught. The exploded diagram here shows the similarity to the modern roll on/roll off ferry, not surprisingly give that the LST is the parent of this ubiquitous modern workhorse. If the ship form does not seem all that seaworthy to you, you have a point.

Here's a better view of an LST unloading via pontoon causeway: 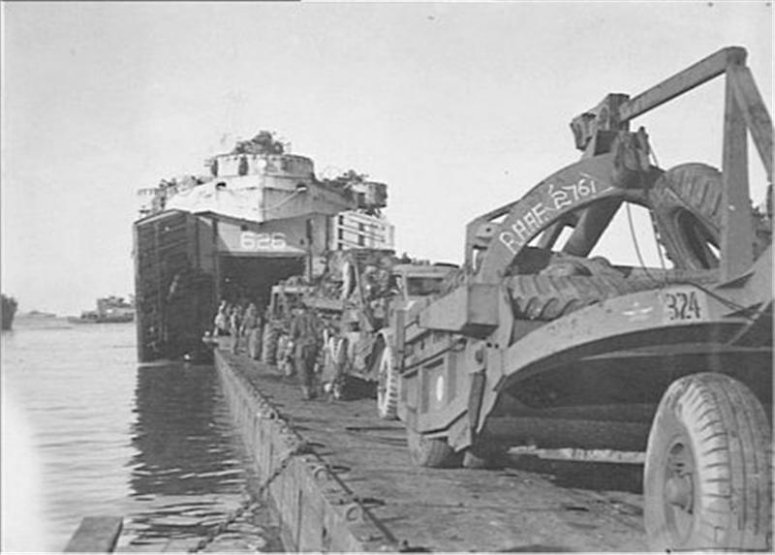 It's Diggers, with diggers! (RAAF heavy equipment is being unloaded to build runways on Leyte.)

These views suggest how important beach conditions are to determining how LSTs will land and be unloaded, but there is more to it. A beached 327 ft ship is going to suffer severe hogging strains depending on beach slope, tidal range, and unloading time. There is not much point in conducting an amphibious operation into a siege if you write off your resupply fleet doing it. It will also be out of service for an entire tide if the beach is too shallow for it to back off.

This is why High Command West's focus in the Normandy effort is Cherbourg, the obvious and immediate Allied objective. It is not always a welcome focus. The men of 1st and 29th Divisions will not be happy to know that the weak defences at OMAHA have been reinforced because of the threat that a landing there poses to the base of the Cotentin peninsula, for example. But it is a focus, and it is stripping resources away from other parts of Normandy.

There might  be a bit of a surprise on the horizon.
Posted by Erik Lund at 7:59 AM

Email ThisBlogThis!Share to TwitterShare to FacebookShare to Pinterest
Labels: D-Day, Pirate History of the Atlantic, Postblogging, Substructural History of Strategy