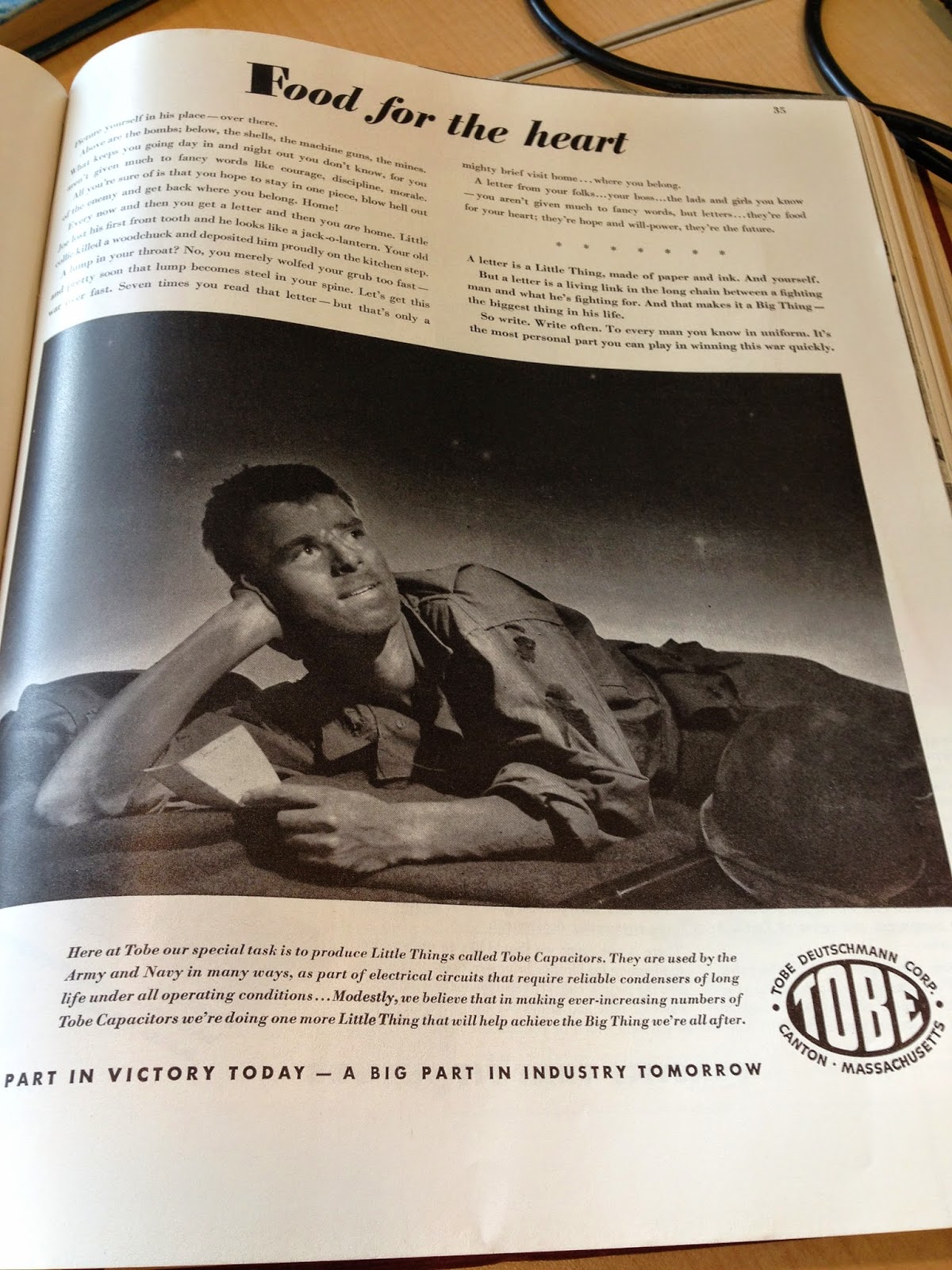 Eh? The theme that I was trying to capture with this image (apart from, you know, me being a terrible photographer who is a little tired of fiddling with cropping right now) is one that I prefer to emerge organically. That being said, it also, at least in my mind, references another image that I also quite like. 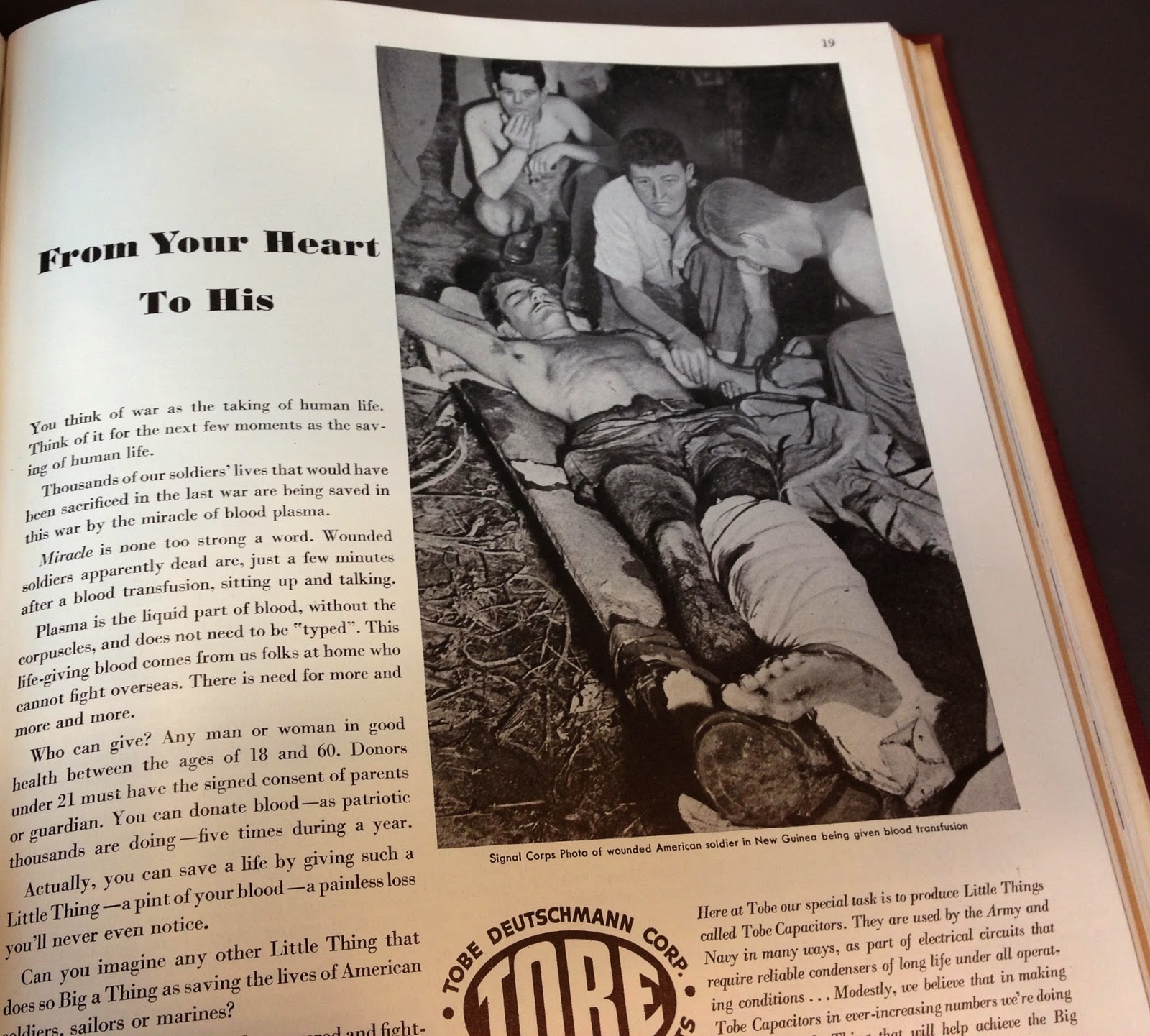 The problem being that I liked this one so much that I have already used it. As the two together make explicit, one of the things you can do on the home front to preserve your loved ones overseas is to contribute blood for battlefront transfusions. Referencing some source that is big on numbers-that-are-bigger-than-other-numbers and a little socially tone-deaf (not the last time that awkwardness is going to crop up on this post), Rick Atkinson tells us that the United States expeditionary force that is about to cross the Channel will be accompanied by 800,000 pints of plasma, "meticulously segregated by white and black donors." The arrival of 3000 pints of whole blood to supplement the plasma signalled the imminence of D-Day, Atkinson tells us, as whole blood will keep only two weeks at  the most. (Wikipedia says that the modern standard is 42 days, but that this is controversial.)

From this, a couple of history-of-technology facts jump out. The first and most important is the obvious completion of a very rigorous cold chain, without which the blood and plasma would be of very little use. The second is the development of a fractionating method for making blood plasma, and the development of an industrial-scale anti-coagulant. The third is the prehistory of the discovery of blood types, which takes us back into the 1920s and 1930s, and a uniquely American and unspeakable social panic. The discovery of the medical cause of sickle cell anemia, and the classification of blood by sickle cell traits led to a (putative) medical test for the presence of African-American ancestry. The fourth is the anti-coagulant, probably atropine in this period. 1944 is a particular period in the history of pharmacology, as Atkinson signals a moment later in noticing the provision of 600,000 doses of penicillin, and the next page by reference to the "anti-seasickness pills" now being issued.

That's where the other reading of my first image comes in. Drug humour! (You don't see it? Chill. Anything can be drug humour if you just try hard enough.) If I have not been awkward enough already,  it's now time to talk about the Greatest Generation's drug problem!

Fortunately, there's always someone more awkward than I: 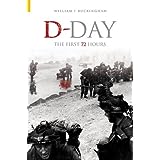 Knowing Bill from old H-War days, I was not surprised when his book about the first 72 hours of D-Day operations was not afraid to call a spade a spade. (Are you now thinking about the sickle cell discussion? Awkward.) Specifically, he is extremely critical of 4th Infantry Division's development of the UTAH lodgment. It happens that 4th ID was one of the units recalled by the June 4th postponement, and that much of the unit has been riding out the choppy Channel weather in a convoy slowly circling the Isle of Wight for the last 24 hours.

Taking "dramamine." Bill isn't so crass as to say so, but he is not the only person to pursue this investigation. In connection with the US paratroopers, some people are willing to be much more explicit. Depending on individual physiological reaction, at least some of the paras who jumped before dawn on June 6th were stoned. Others, and this would not have been nearly as good a bit of news for anyone at the far end of their fire arms, were "irritable."

They were not, however, stoned on dramamine, like the hardcore modern Gravol shoplifters. The side effects that have so far kept Gravol as an over-the-counter medication on the assumption that there has to be something seriously wrong with you before you are ready to abuse Gravol would have disabled them pretty effectively. Also, dramamine did not yet exist. Eli Lilly did not market the product until 1949, after a considerable amount of work had been done on the safety angle, and, in particular, the scopolamine used in the wartime preparation had been suppressed. Scopolamine abuse is another matter entirely. That did happen in Normandy, although not on 6 June, which was only the moment when a small number of people discovered that they liked scopolamine. Scopolamine is a pretty desperate thing to be putting in pills and giving people, and the last thing anyone involved needed to be worried about was hooking up the very small number of very messed up people who would go on to abuse scopolamine with their drug of choice. What they had to worry about was the war.

The story of "dramamine" abuse is a pretty trivial one in the larger scheme of things. We still won D-Day, and it is very much arguable that we would have won it more if the troops were wrung out by sea sickness instead of in some cases being a little out of it. Compared with, say, Frank Whittle, and all the other less well-known cases that in retrospect seem to signal problems with amphetamines, the "motion sickness pills" story is a pretty trivial one. If barbiturates are your drug of choice, then you might want to set your time machine for the 1940s, because they're as legal and as over-the-counter as, well, Benzedrine. My sense is that the only reason that you would be abusing scopolamine is that you do not yet know that there are pills you can buy that will have the same effect, only with fewer side effects.

Benzedrine, Dramamine, segregated blood supplies, penicillin (yes, even penicillin has a disreputable side). I am amazed that none of this came up the last time I talked about it, as a technical appendix to the Postblogging Technology post that was launched when I idly Googled Robert S. Morse and discovered that he founded Minute Maid.

Take a moment to follow the Wiki link to the  history of Minute Maid. Orange juice concentrate presents science with some of the same difficulties as blood plasma manufacture. You need to get water out of an organic fluid without changing the properties of the fluid too much. It turns out that Morse's National Research Corporation was doing that before it turned to concentrate. It was not making blood plasma, though. It was making penicillin. The war years saw the building of massive vacuum distillation plants to make penicillin in powdered form from live broth cultures. It was plant that, like much wartime plant, would need repurposing. How did people look at orange juice concentrate in 1944? As a freakish novelty product, or as part of the foundation of a new North American middle class? Because the answer, as it turns out, was the latter.

To haul it back to the D-Day, and to tens of thousands of soldiers being issued an inadequately tested and potentially dangerous motion sickness drug, a danger acknowledged at the same time by massive blood banks and penicillin stores, I just want to stop here, with a week to go, and point out what we are trying to do here.

It is very, very simple. Forget what is going to happen. Look at what has happened: at Dieppe, but also on the first day of El Alamein, or on the Somme. We are asking for a decisive breakthrough on multiple attack axes of attack on the first day, in fact, the first hours of an assault. Many battles of this kind have been won, but very, very rarely according to plan and at the first rush. Unfortunately, this assault cannot succeed any other way.

Soldiers of the United Nations! We ask of you the impossible, with only the assurance that this war is almost over, and we cannot ask you to ignore the double meaning of that last sentence. Here are some pills to make it bearable. We love you. Please come home.