The 6th, 82nd and 101st are in the air, flying to war in darkness. By moonlight they will land on their EUREKA beacons.

Twenty-three thousand men are going into battle. It is a ridiculously large number of precious infantry, and, large as it is, it could have been more had there been enough aircraft. British 1st Airborne is in the United Kingdom, while the American 17th is held up in Boston by shipping priorities. A parachute division looks like this (in truncated form from here):

Although my intent in reproducing a divisional order of battle is to emphasise how many non-infantry badges jumped into battle, this is a lot of airborne rifles.


Now let's take an impression of  landscape instead of seascape. Yes, the scaling will be extreme, but I used a pasted in Order of Battle to push it below the box!

Notice that it is framed by Cherbourg in the east and Le Havre in the west. World War II, amazingly enough, is not the first war to have ever happened. It is not even the first to feature threatened invasions of France by Britain. Or, for that matter, of Britain by France.  That is why Cherbourg and Le Havre are blessed with centuries of fortifications. Not that we care when we write about D-Day, in spite of Nicholas Lambert's heroic effort to put "battleships versus fortresses" back at the centre of Nineteenth Century naval history in lieu of overcooked Mahan. Civil engineering just is. You practically have to stumble across it for it to make it into a campaign history.

Well, I  care. Or, at least, try to care, when it comes to rehabilitating Cherbourg. Lambert is, or was, before he decided that World War I was more fun, on a course that might have led to a full-scale reinterpretation of the grand civil engineering projects that made the modern port city, one which would have required us to explore the power of masonry to resist guns, sea, and locomotive pounding. But we do not need to know such things, and Doctor Lambert is instead lecturing as a "visiting affiliate professor" at Maryland.

Today is not the time to contemplate Cherbourg. It is to foreshadow tomorrow (hopefully)'s climactic post and then look at some maps. The invasion is going to come between the two fortresses. It would be crazy to attack them directly, as they are much more heavily fortified than the land between. Which is not to say that the land between is not fortified. Because, again, long history, full of maudit Anglais. 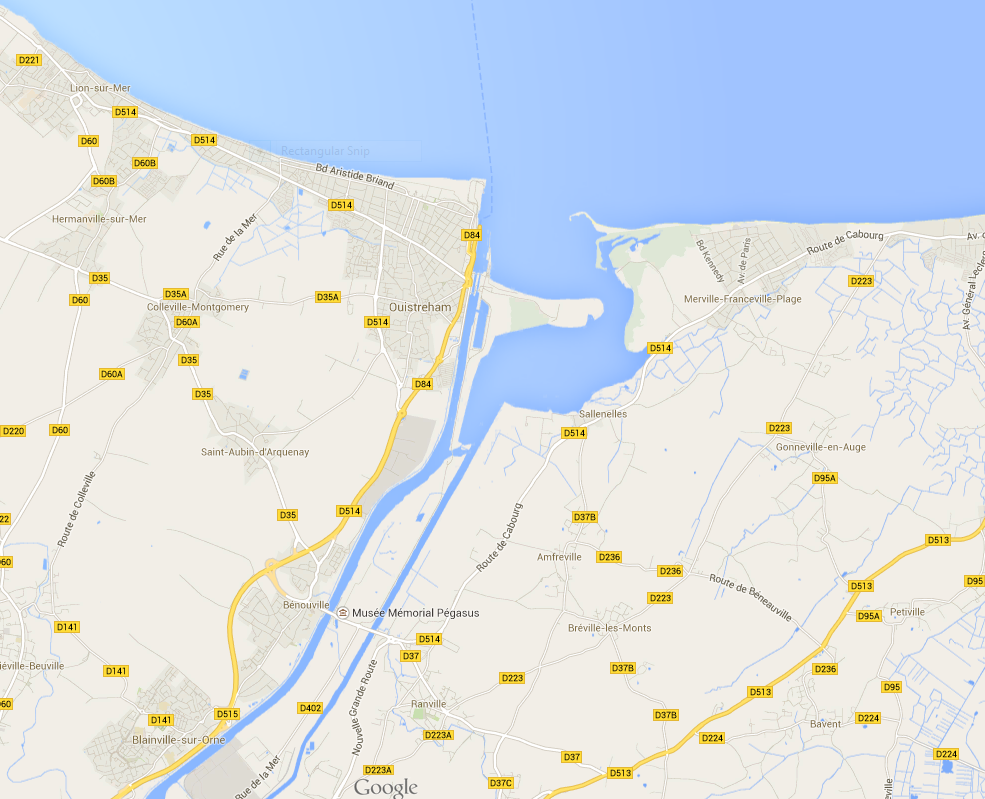 Once again, the roadmap version is more useful than Google Earth. The reason for this is simple enough. This is a human landscape. The River Orne is only 170 kilometers long, but discharge at its mouth is an average 27.5 cubic metres/second. That's almost half the average discharge of the Thames! The reason for that is that it drains a very wet piece of land. The grids surrounding the Norman towns in this picture are the drainage ditches that turn marshes into fields. If you have ever wondered what made the very ordinary crossing that would become Pegasus Bridge so important, here is the answer. The Orne is a well-trained river. Choices have been made about where it can and cannot be crossed. The unprepossessing bridge is a classic example of the lock bridges that have proliferated on the canalised rivers of Europe since the Industrial Revolution, and the causewayed road that serves it is the only way to get from land to river and back because that is how the drainage of the surrounding fields is best organised. Notice that the river work has created a basin beyond the Caen Ship Canal? This kind of thing is going to turn out to be important.

Look at that flat, mannered landscape. It looks like a pure object of history, something upon which humans can do as they like. It's not. That's the paradox of civil engineering. The Orne does not misbehave very much, but that is because the Orne gets a beating when it tries.

But it has its revenge, written into the landscape of the road network. The defenders are relying on that revenge. The possibility that attacking troops might land right in front of those mazes of watery ditches gives the defenders a warm feeling in their stomaches. They are not necessarily wrong.

Now here's another view, small-scale rather than large, and a Google Earth view: Arromanche-les-Bains. 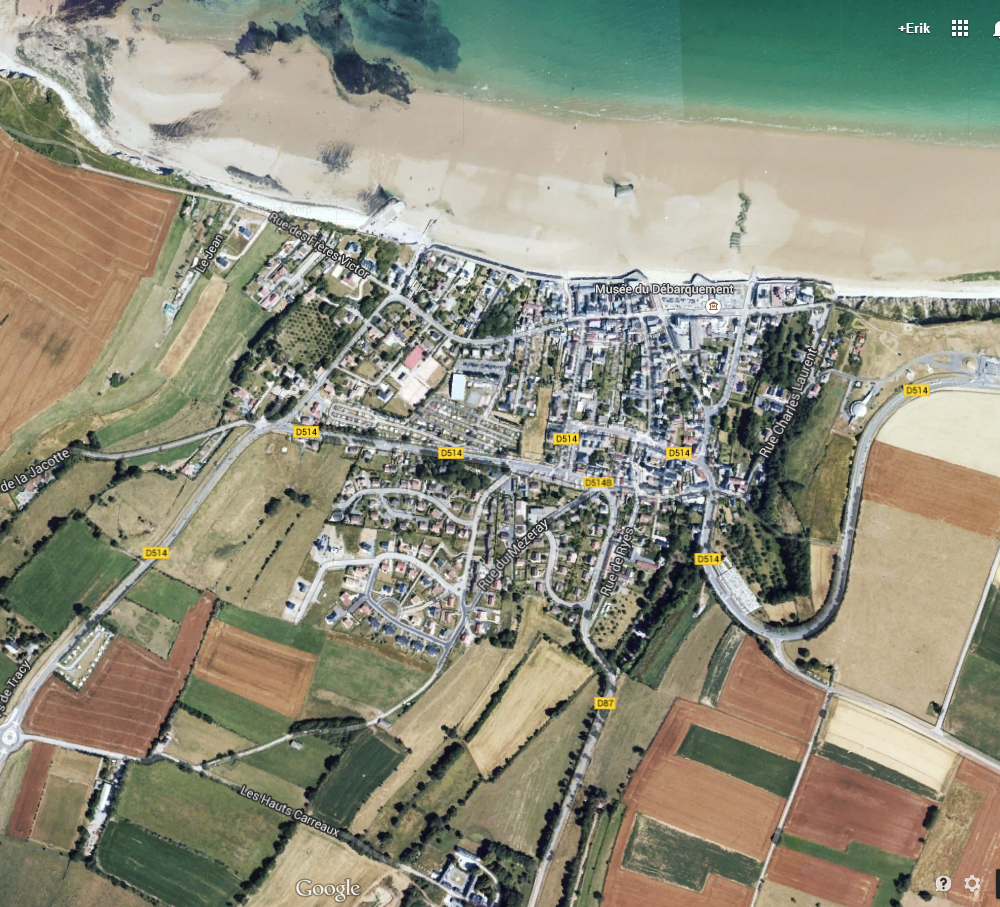 For now, notice the road grid. 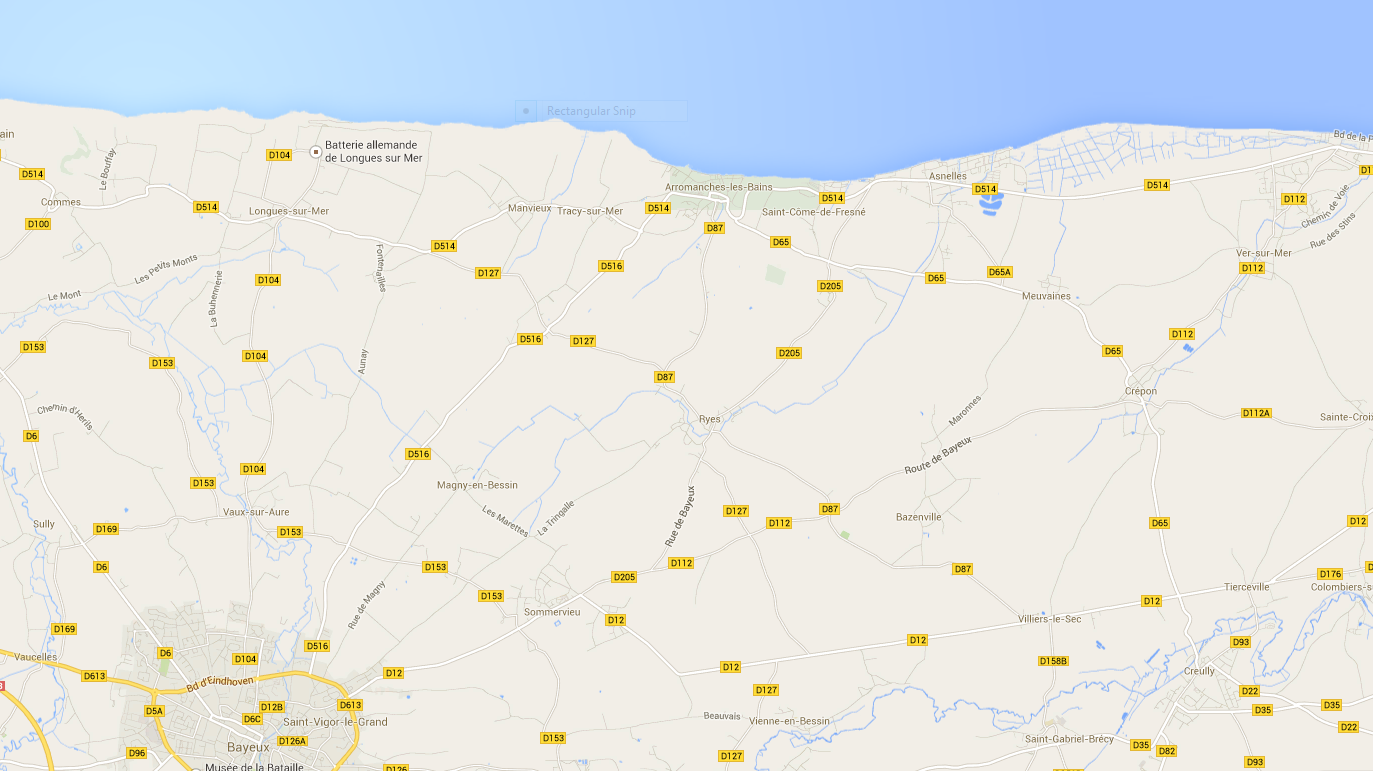 Arromanche is the centre of the road grid because it is the place where the water (in this area) gets let out through the sand that would otherwise choke it off and produce an inland marsh. Now, Arromanche is not the coastal town into which German counterattack will be channeled by the road grid. That honour fell to Le Hamel, just a bit to the east. In retrospect, from the German perspective, Arromanche might have been a better choice. The counterattack will be exhausted going into Le Hamel, and the Germans will be denied the chance to use Arromanche's built-up area in defensive fighting. instead, the Dorsets will take the town against slight resistance on the night of the 6th, as part a fairly successful central area operation that will also take Bayeux, beginning the progressive cripping of the German operational logistics network.

That said, the Arromanche terrain recapitulates itself eastward. Where it is possible to leave the beaches for the inland, there are sluices through the sand. Where there are sluices, there are old fishing/milling towns. As at Dieppe, the British and Canadians will be thrown into a fight for built-up localities right from water's edge, a fight that will require a lavish allocation of armour, engineers and firepower.

I will skip Bloody Omaha for now, and move on to Utah Beach, the most famous lacustrine landscape of D-Day. 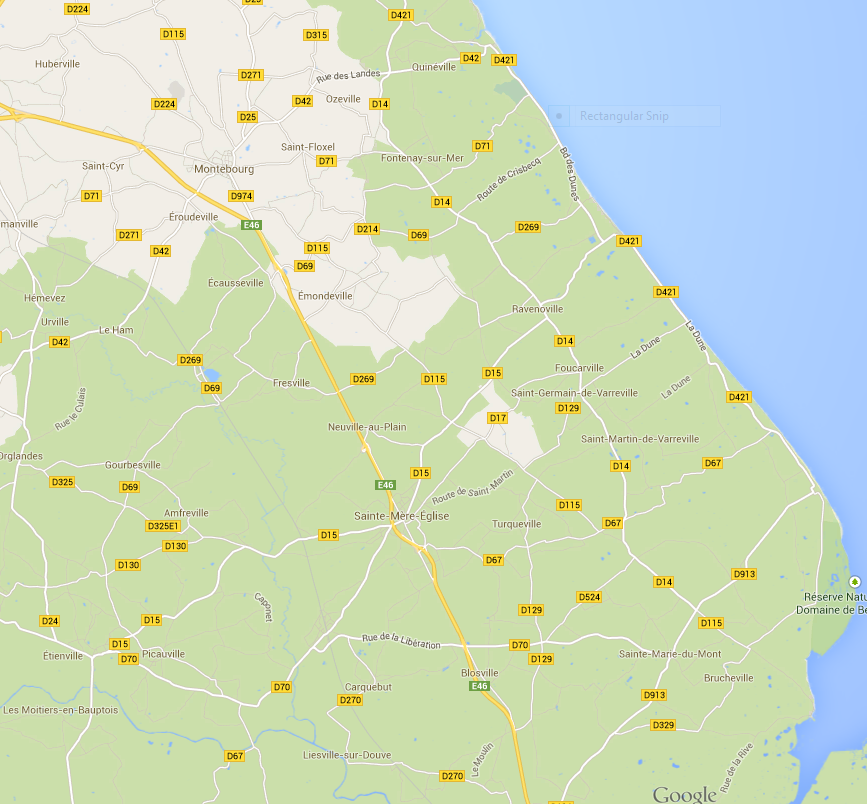 Rick Atkinson wrote the hell out of Guns at Last Light, and hit a particularly high, Homeric note by calling the Cotentin "famous for cows." ("Horses" would be even more Homeric, and he does finally get them in when the armies arrive at Cologne, but small criticism. I wish I could write like that.) Anyway, we can see why: water, meadows, grass, the usual stuff at this blog. Again, the Germans are relying on the natural hydraulic defences of a long-managed landscape. There is no point in putting more than a thin screen of defenders on the seaward side of this drowned landscape, where they will not be able to counterattack. Counter attack forces must be held inland. And so that it is the Americans, not the Germans, who have to rush machine guns on narrow causeways, the nodal points of the levee system must be held.

They will not, due to the night drop of two airborne divisions.

It is usual at this point to describe the confusions, mistakes, and regrettable losses from other causes suffered by the American paratroopers in this operation.

Rubbish. We could, after all, talk about troop carriers that turned around for a second pass to drop men even more tightly on properly lit beacons, putting a full regiment of paratroopers of the 82nd down. Or we could just say of them, they took St. Mere Eglise. Or the approaches to it: Good enough. The Utah beach exits are in American hands, and the most dangerous, most marginal of the beach landing areas is a success so complete we fail to notice, except when Bill Buckingham goes on for pages about how "slow" 4th  (and later 90th) Division was to move across this flooded, constrained landscape. (I think Bill conceives this as rhetorical revenge for the equally cruel things said about the time it took for the Commonwealth troops on the other flank to take Caen. Neither critique strikes me as particularly generous given that men were dying.)

*Notice that the Wikipedia article on the Light Tank Mark VII Tetrarch feels compelled to notice that the Tetrarch proved inferior to the opposing German armour. You think?
**The industrious Ken Ford and Stephen Zaloga turned that image up at NARA, and thanks to them. (Buy their book!)