Serious business, today, folks. Armies fail; states fail; gasoline prices rise; people worry about their jobs and put off purchases; at the extreme, they put off life itself. That kind of thing just can't go on.

So, obviously a blog about technology and society and war and grass should start an entry about the day after the Great Channel Storm with this, right?

Nah. Instead, I'm going to lift some classic material. (Art by Carl Barks and  Don Rosas. Buy this! Or don't, because it seems to be out of print. How could that happen?) 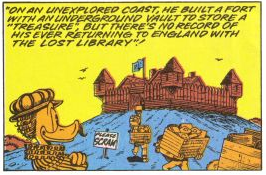 The English pirate, El Draque (he's a duck!), has captured a "lost library" from the Spanish on the Pacific. On an unexplored shore, he builds a fort to store this treasure. (If you care about the imaginarium, this is the source of the Junior Woodchuck Manual.)

By 1818, El Draque's old fort is occupied by the British (who are Beagles), who are being attacked by the Spanish. Because reasons. Cornelius Coot ends up with the deed to the fort and 10 acre hill. Which, as far as early West Coast landgrabbing goes, is pretty unambitious, but whatever. And while this may not sound like history of California the way you learned it in school, but don't worry, we're talking about Calisota, not California. You also don't have to worry about the JWM. It's safe underground. 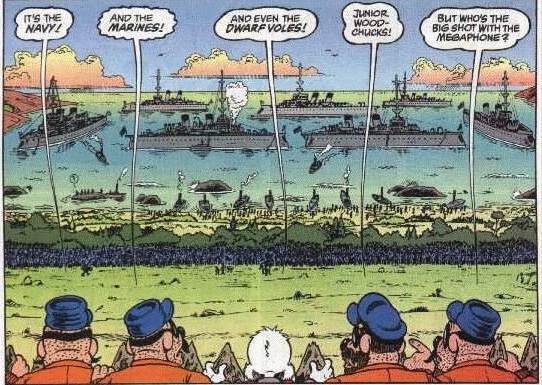 So Scrooge McDuck has come to little Duckberg on the Calisota coast, intending to build the world headquarters of his (mostly) mining empire on the site of the old fort on the hill, now known as "Killmule Hill," and soon as "Killmotor." And the Beagle Boys get wind of it, and then Teddy Roosevelt, who is also a Beagle, gets upset, and so on. I'd call it a "long story," but comic book writers hadn't invented "decompression" yet, so it's actually pretty short. A lot shorter than this introduction is turning out to be 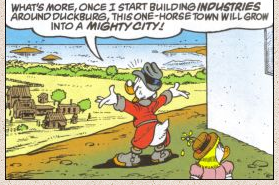 It all gets sorted out, and Scrooge McDuck builds what you obviously need for a global corporate headquarters (a giant bin of money), and promises to build industries such as railroads to make Duckburg a might city. The blonde girl duck is his sister. Not the one who becomes Scooge's nephew, Donald Duck's, mom. That one has anger management issues, because bipolar disorder is always hilarious. Donald Duck's Dad is a duck, too. But not a Scottish Duck, so his last name is "Duck," as opposed to "McDuck." Which you were always wondering about.

"Based on the geographical short distance to Silicon Valley and that most modern duck-stories (even though they're not Carl Barks or Don Rosa stories) show a very modern and high-tech city, we may assume that Duckburg is one of the leading cities in the world within electronics and hi-tech at the dawn of the new millennium.."

You will notice that I link to a chapter of Grøsfjeld's fan site. That's because of a shortage of internal HTML links in an otherwise awesome fansite, which is well worth wasting your time on.

Speaking of which, I do have a reason for exploring the funny book version of the folk version of California history here, which is, of course, to bring out the funny book version of racial essentialism here. You will notice that it has been thoroughly deracialised and classless. Both criminals and Presidents are beagles, and both beagles and ducks come from any number of countries. The point is that in Calisota society, ducks marry ducks, and beagles marry beagles. To do otherwise would be a zoological absurdity, one that we do even need to think about.

Just like we do not have to think about the transition from "El Draque" to 1818, or allow for a Spanish interlude. History goes, as someone much smarter than I once put it, through tunnels that link two eras that need to be linked, avoiding the messy stuff in between.

Also,  I do not notice many working class ducks. Which is odd, because if there is one thing that a DUKW was, it was working class.

This is a DUKW: a two-and-a-half-ton palletised truck bed in a boat equipped with two extra drivetrains, one to a screw, the other to a winch. DUKWs have tyres so that they can run up onto the beach, but in Normandy they were often called on to drive to depots as many as 15 miles inland. It was hardly unknown for a DUKW to run out of fuel, not only on the inland run, but in the surf, while waiting in a queue to land onto the congested beaches. When they ran out of power, they can broach and be rolled over, and even if that does not happen, the bilge pumps will stop working, and the boat-truck can easily swamp. 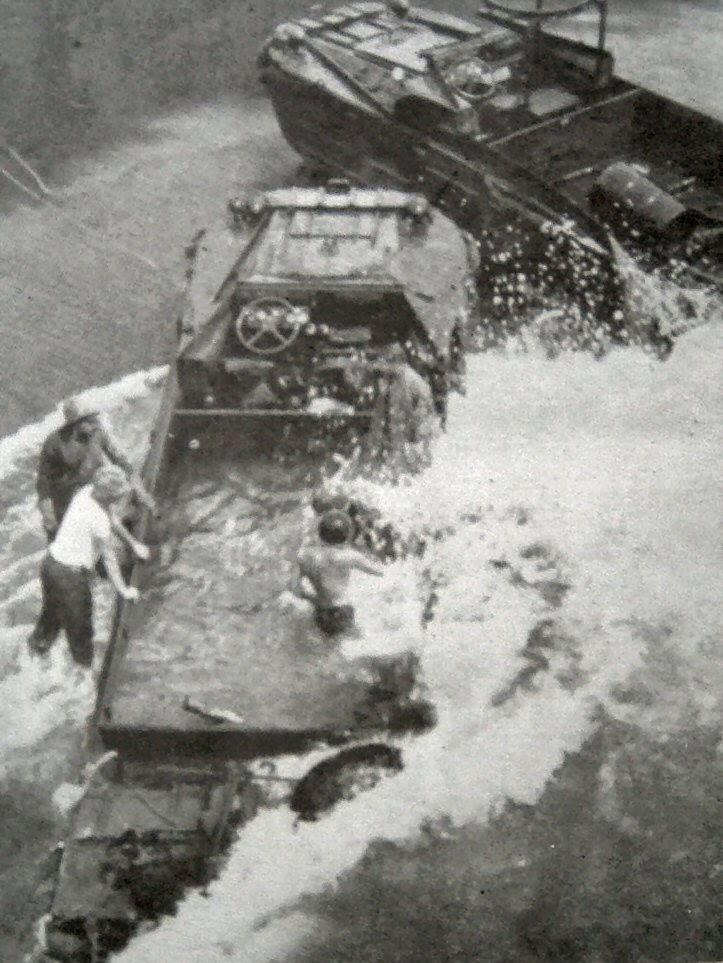 Not to mention that they were routinely overloaded, sometimes with as much as seven tons of stores. It was not a good idea to waste DUKWs, much less their crews. Only seven DUKW companies were available on the American beaches for some time, and control of them was expedient at best, with operations soon escaping the grasp of the headquarters initially tasked with managing them, and 1st Engineer Special Brigade had to evolve over time.

One of the celebrated facts of the Normandy Campaign is the way in which the beaches managed to support it by unloading so much cargo. It seems to be a modern myth that the beaches overachieved their targets, but hitting 80% of those very optimistic goals seems like enough of an achievement to me.
More to the point, when we talk about "unloading over the beaches" and how valuable the DUKWs were, do you notice something missing from the conversation? 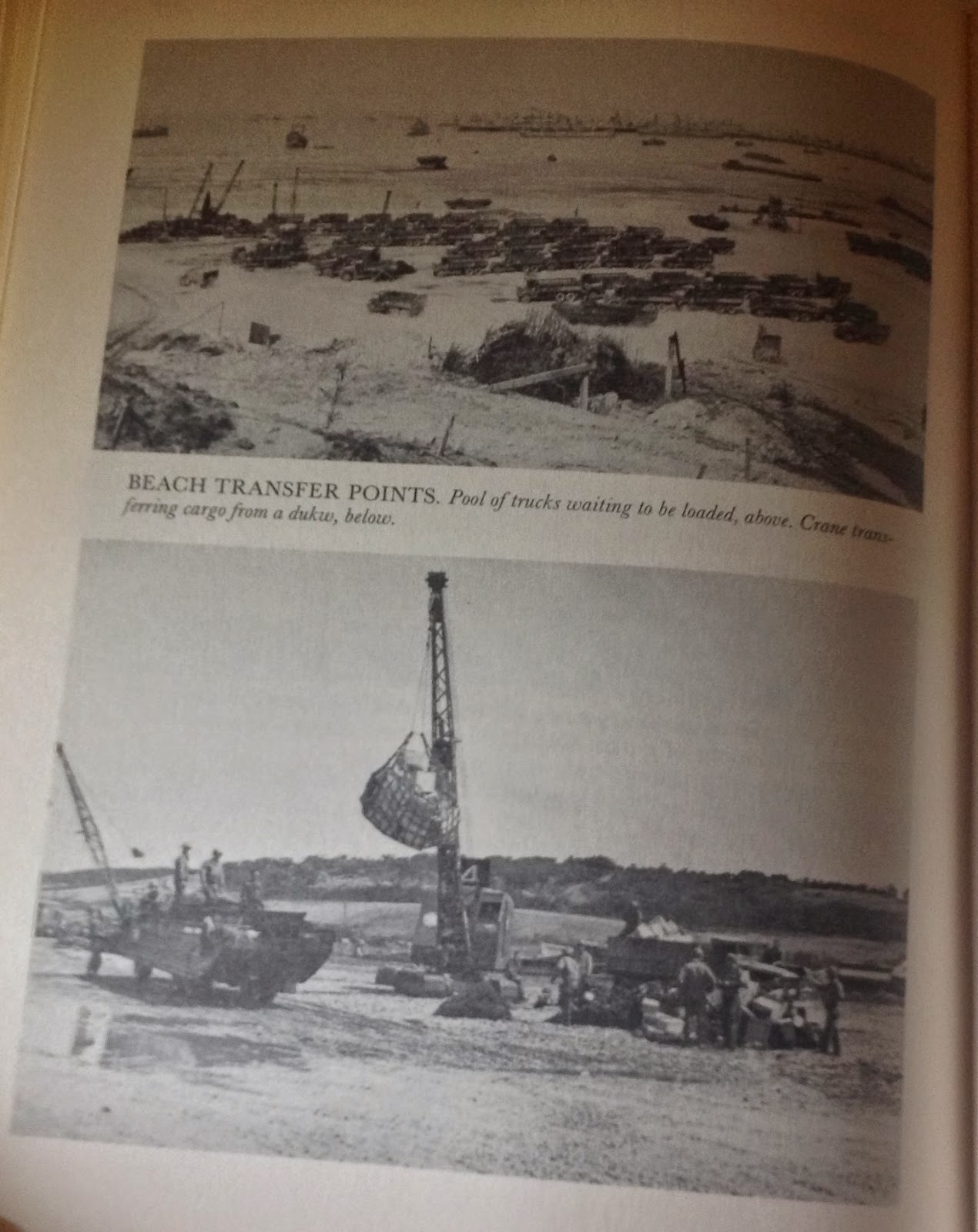 The beaches didn't do anything. Neither did the DUKWs, for that matter. It was the men who crewed the DUKWs who achieved all that.

So who were those people, you ask? Just kidding: after all of this buildup, you probably know perfectly well who they were. (1:30). Not everyone in the Transportation Corps was Black; not even everyone in the DUKW companies, but employment was still pretty heavily colour coded. Here's pictures! 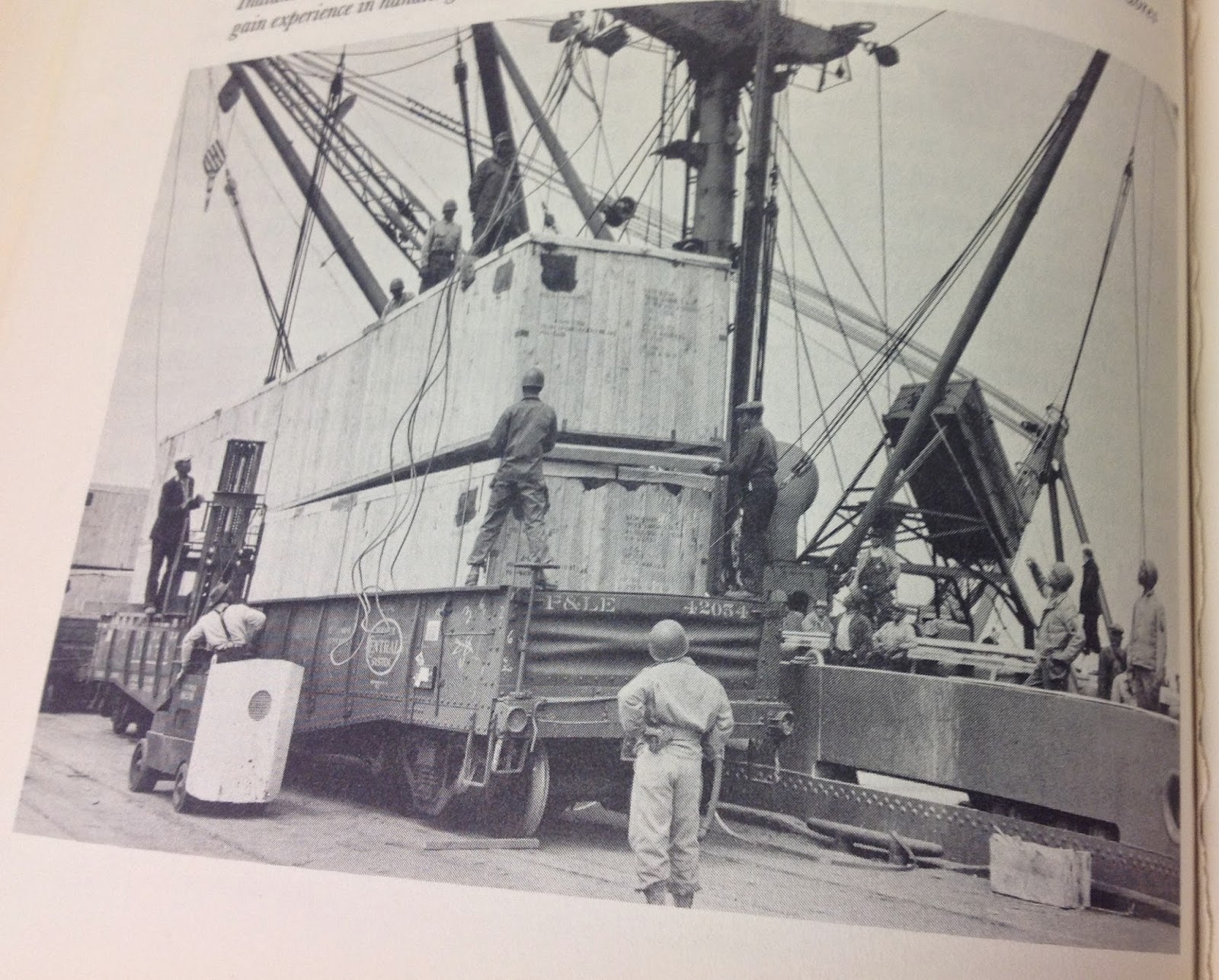 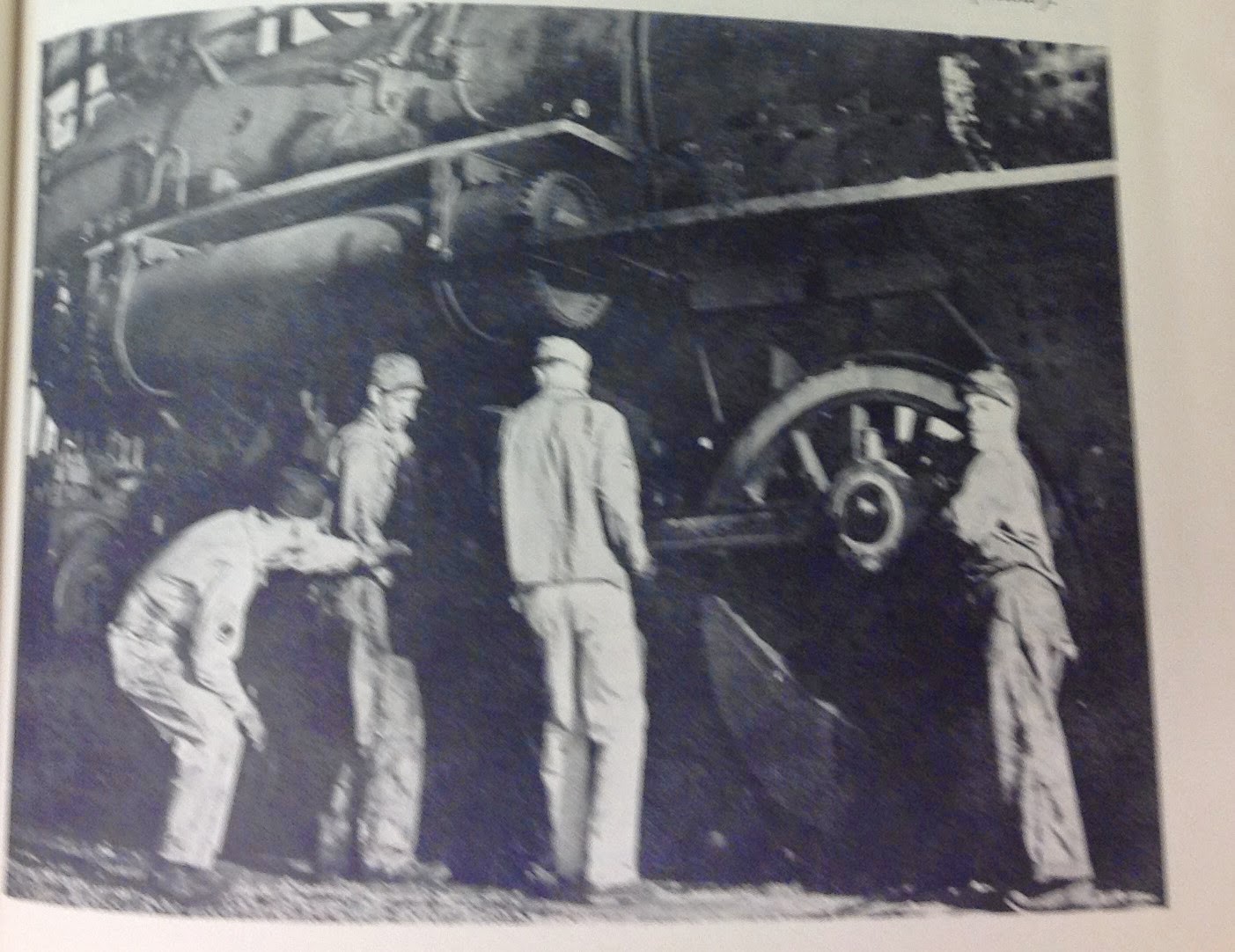 Sorry about the fuzzy pictures, which kind of vitiate my point. (All from Wardlow, Transportation Corps.)

DUKW units, on the other hand, did not have the luxury of colour-discrimination. They were segregated, and the units were treated differently. To start with, General Cross, the engineer commandant, tried to except the amphibian truck companies from the use of Black personnel entirely. The White raw material he was given was inadequate enough.


“The training of competent amphibian companies was intensified by two circumstances: the degree of technical skill and judgment required to operate for the proper operation and maintenance of this new vehicle; and the unsatisfactory quality of the troops assigned to these units.” …”The personnel assigned averaged far below the desired level of skill and initiative. This was especially true of Negro personnel, most of whom had no mechanical background whatsoever and low mechanical aptitude.”

As Wardlow put it. Ulysses Lee, in his tart survey, Special Studies: Employment of Negro Troops, points out how common these claims were, and the extent to which the War Department had to compel subordinate formations to accept Black troops. Indeed, it even had to intervene with local Selective Service boards, pointing out the social risks of passing over Blacks to take Whites further down the eligibility list.

To put it more bluntly, American society in the 1940s showed considerable reluctance to even use Blacks as cannon fodder. This is not how we expect the lower classes to be treated in total war.

General Gross first tried to have the amphibian truck companies excepted from the general use of Black personnel in the Corps.

His concerns were not based entirely on racist preconceptions. Of a group of 1000 Negro troops trained at the New Orleans centre surveyed in the summer of 1944, only 10.7% had completed elementary school, with 52.2% testing at Grade 4, 42% at Grade 5. Mechanical aptitude tests were “unsatisfactory.” (Wardlow, 461)

The railway units, on the other hand, were rated excellent, because staffed with technical men taken up from industry. (Except, of course, we've seen them training new men.)

Unfortunately, the War Department tartly pointed out that America could not afford to ignore crucial sources of manpower, and he was directed to form segregated amphibian truck companies.

So, instead, the Corpstried to raise companies that were 15% overstrength and washing them out down to muster, in order to cut unsuitable material. This, the War Department noted, was well over the 5% authorized in general. This failed, too.

Ultimately, the solution was the same in every branch. The contractor ran a three week maintenance course for a selected group of 32 officers and 270 ORs. These were then send them off to the units to teach everybody how to Not Die Driving DUKWs for as long as the BOLERO schedule were permitted. At this point, criteria for inspection were established that the unit could pass, and the unit went overseas. (At one point, early in 1944,  12 of 102 units inspected were rejected for deployment. By the months immediately prior to D-Day, none were.

It should be noted here that, even in Lee's source, the employment of Black troops and officers in World War II was often a "failure." It was difficult to find Black officers, difficult to assign White officers to Black units, and Black units often underperformed. The story here is dismal, and Lee's study eschews the impossible exercise of a general history of segregated Black units in World War II for a study of cases in what can be intepreted as almost as much of a civil rights experiment as a deployment of a nation's manpower resources.

Before returning to the DUKWs, I want to make the point that from Moroccan goums to the Indian Army to Senegalese tirallieurs, never mind Irish Guards and Highlanders and Tatar cavalry and Albanian mercenaries and barbarian auxiliaries, social marginalisation has not, historically, been a barrier to military efficiency.

In the case of "the employment of Negro troops," it was. Except in the case of the amphibian truck companies of Normandy. Who won the war, lack of skill, initiative, mechanical aptitude, and reading skills notwithstanding. Apparently, a very important part of the history of race in America takes place in a truck tunnel.

I am not going to end a short posting with conclusions drawn about how armies succeed and fail. I do think that far too much of the conversation is carried out to the exclusion of the most obvious factor in play --motivation. My hypothesis is that putting the sons of sharecroppers in trucks and giving them charge of maintenance sufficed to motivate them, because the means to change and improve their lives  in a very sensible way (by getting good at auto mechanics!) was being placed under their control, in a way that no racist apparatus could take away.

I would love to see a prosopography of the men who unloaded the supplies at Normandy, many, if not most of whom were White, not Black. I also suspect that their traces are invisible because they prefer it that way, because their lives changed in the tunnels in ways that they are perhaps not comfortable sharing with the world.

Where did Cornelius Coot really come from?

Email ThisBlogThis!Share to TwitterShare to FacebookShare to Pinterest
Labels: D-Day, Gathering the Bones, Goodbye to the Vikings?, Old Europe