Yesterday morning, 70 years ago today, Herbert Morison rose in the House of Commons. The Home Secretary had something to say to the nation.

Yes, it is a little facetious. Three V-1 flying bombs will strike the Borough of Beckingham, two in Southwark, one in Lambeth, one in Lewisham, and one in Wandsworth, but the two that struck Deptford in the early morning, killing 24, would have been more on the minds of parliamentarians than the dribble of bombs that came in through the rest of the day. Deptford Dockyard is a major staging area for the Invasion, and an area a quarter mile square around the dockyard will be struck by 7 V-1s and a V-2 during the campaign, doing significant military damage as well as pretty much wrecking the local housing stock. The rain and damp of a dismal summer (not to mention the coal-less winter to follow), penetrating through opened building envelopes, will complete the work of the high explosive blasts.

On the other hand, with the techno-utopians arguing that NOW is the moment of the robot revolution, it is as well to remind ourselves that they have been with us for a very long time indeed, and General Sir Frederick Pile told the  Chiefs of Staff what Google is telling us now:  A “robot defence” was needed against a “robot target.” (Dobinson, 423.)


By this, Pile meant that he can defend London with just 128 American guns with SCR 584 radars and BTL predictors (the MIT Radiation Laboratory design better know as the M-9 or AA Predictor Mark 10). These would be supported by just 64 British 3.7” with GL Mk III and Vickers predictors. (422-3).

It might seem a little odd that AA Command is pitching its DIVER plan, as it would come to be called, in terms of minimal resource allocation. This is certainly not what the Kent Gun Belt is going to look like in the end, but this is early in the planning process, and Pile's staff faces difficult problems. First, OVERLORD has priority. Many guns (and balloons) must go overseas, and many more to OVERLORD staging areas. Security for the embarking ports will require 1258 HAA (Heavy Anti-Aircrcaft, 3.7", 4.5", 5.25")and 950 LAA (40mm and 20mm) to protect basing areas. These would have to be in place by D-30, an assignment complicated by the fact that no more than 20% of the HAA was mobile. The rest would have to be provided with firing positions, and at least some provision had to be made for crew accommodation. Moreover, the continuing labour shortage called for AA Command to give up personnel as quickly as they could be replaced and limited the amount of construction that would be possible.

Fortunately. based on known CROSSBOW sites, the main threat was on a fairly narrow axis between the Pas de Calais and London (and between the Cotentin and Bristol).  In the event, the necessary American equipment did not become available. Redeployment for DIVER/OVERLORD stripped guns from many other areas, a concern after the winter resumption of German strategic bombing against London, carried out by much more effective bombers carrying much more effective bombs, so that if all of the planes dispatched on the raid of 16/17 January had actually been able to find London, it would have been the fourth heaviest air raid inflicted on the capital to taht time. Fortunately, when a German 130 bomber raid was sent against Hull on 20 April, now defended by only 80% of the guns present in March, the Germans could not find Hull, either. Had they attacked the "Baedecker" targets, they would have encountered no guns at all.

The first raid, on 13 June, left the Government scrambling. After all of the behind-the-scenes scrambling, all the effort to groom public opinion in advance, it was so anticlimactic that the myth persists today that the five weapons that reached British soil were a ranging shot. In fact, the official historian of AA Command observes that 500 weapons were supposed to have been launched, but “everything had gone wrong.” (I think that there is an account in Neufeld, but I would have had to have found time to review the text yesterday to be sure. In general, it turns out that launching unmanned bombs propelled by unstable and explosive fuels from improvised sites is more dangerous than it sounds.)

In the end, all but 50 of 4271 ground-launched weapons were aimed at London, 2934 were viable launches, 1693 escaped destruction, 1270 got through to the London Civil Defence Region. About 42% of weapons seen were destroyed, but only 261 to the huge concentration of artillery on the North Downs, the balance being destroyed by fighters. (434) That AA Command could have done better is indicated by the overlapping performance against the later air-launched V-1 menace. Of 1200 V-1s launched against British targets from the air, 638 were observed by the defence, of which 331 were destroyed by AA fire, 71 by fighters. Of the 235 which eluded the defences, only 65 continued through to London, and one to Manchester. The AA kill rate of engaged V-1s had reached 82%. The "robot solution" worked, though admittedly not as well as the "capture the landing sites with ground forces" solution.

How as this achieved? Technically, the problem was one of remotely laying a 3.7" gun on a predicted target at a radar-given range. (Automatic tracking being a little beyond the existing technology, the weapon had to be manually tracked with an optical sight.)

Remote power laying is a matter of mechanical engineering. A 3.7" barrel is a heavy beast, and requires 127,000 foot-pounds of power to traverse, 117,000 to elevate. This was beyond the capacity of the power drive on mobile AA guns, so special static mountings had to be erected and the guns given a new unit, which, if I am not mistaken, looked like this 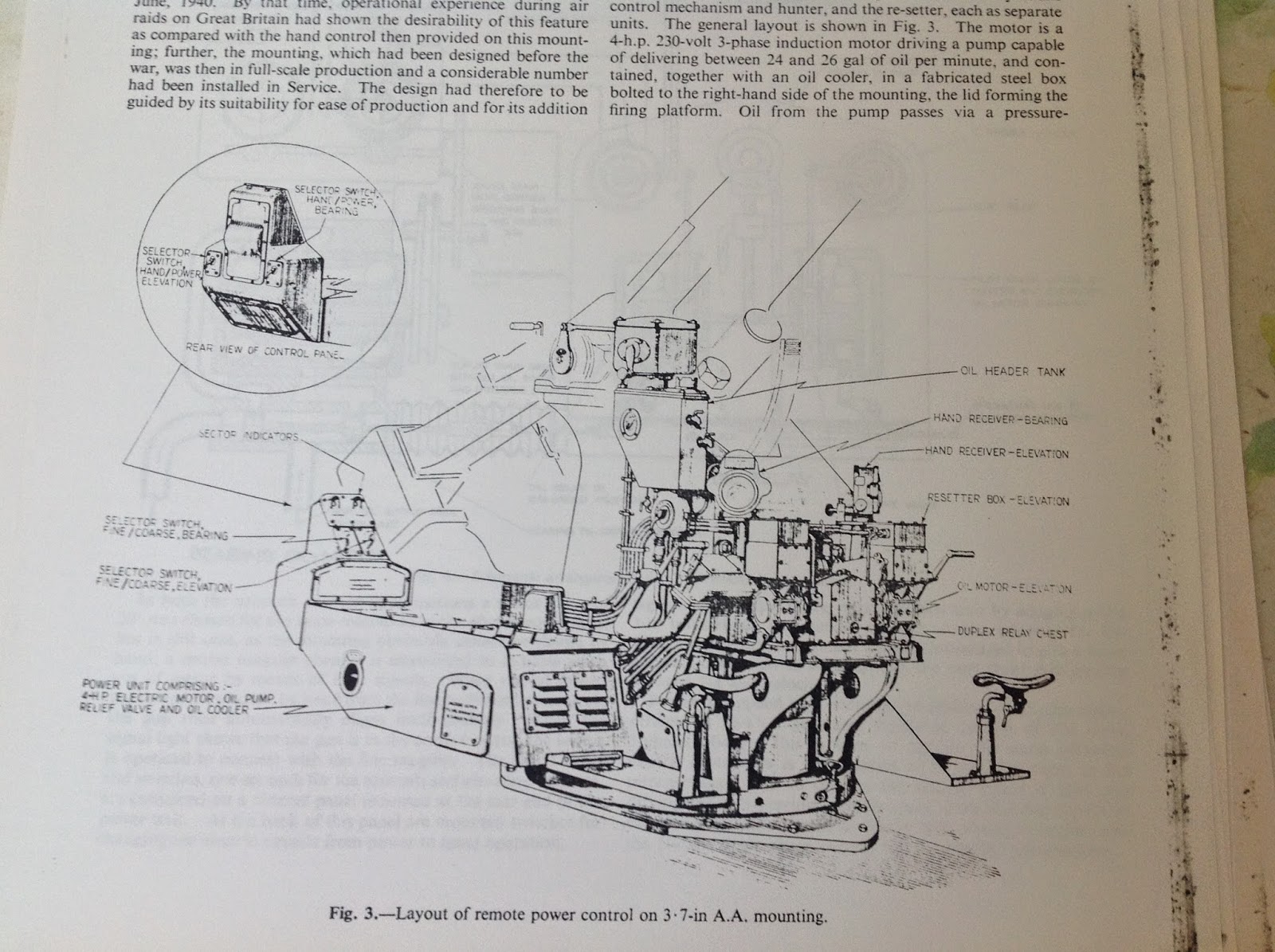 The problem being that the load on the motor rapidly increases with angle of elevation and speed, requiring a "servo" or, feedback controlled motor. Fortunately, the Admiralty Research Laboratory, which undertook the work, already had the Type "E" oilgear to hand, a hydraulic motor originally developed with MacTaggart and Scott to rotate submarine direction finder loops. 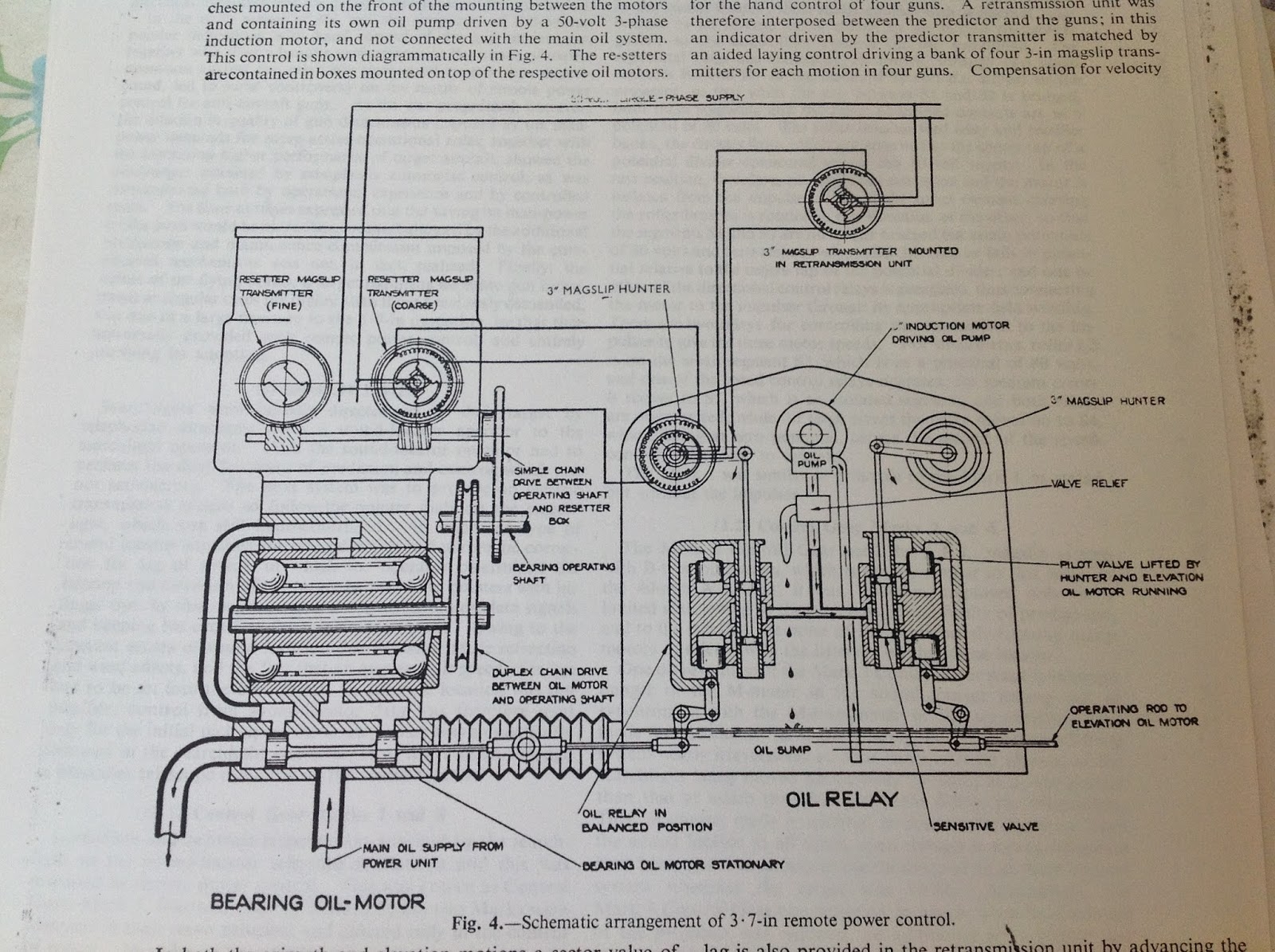 That's the schematic, in case you want to build one at home. Please do not wear loose clothes or let the floor around the output shaft get slippery. 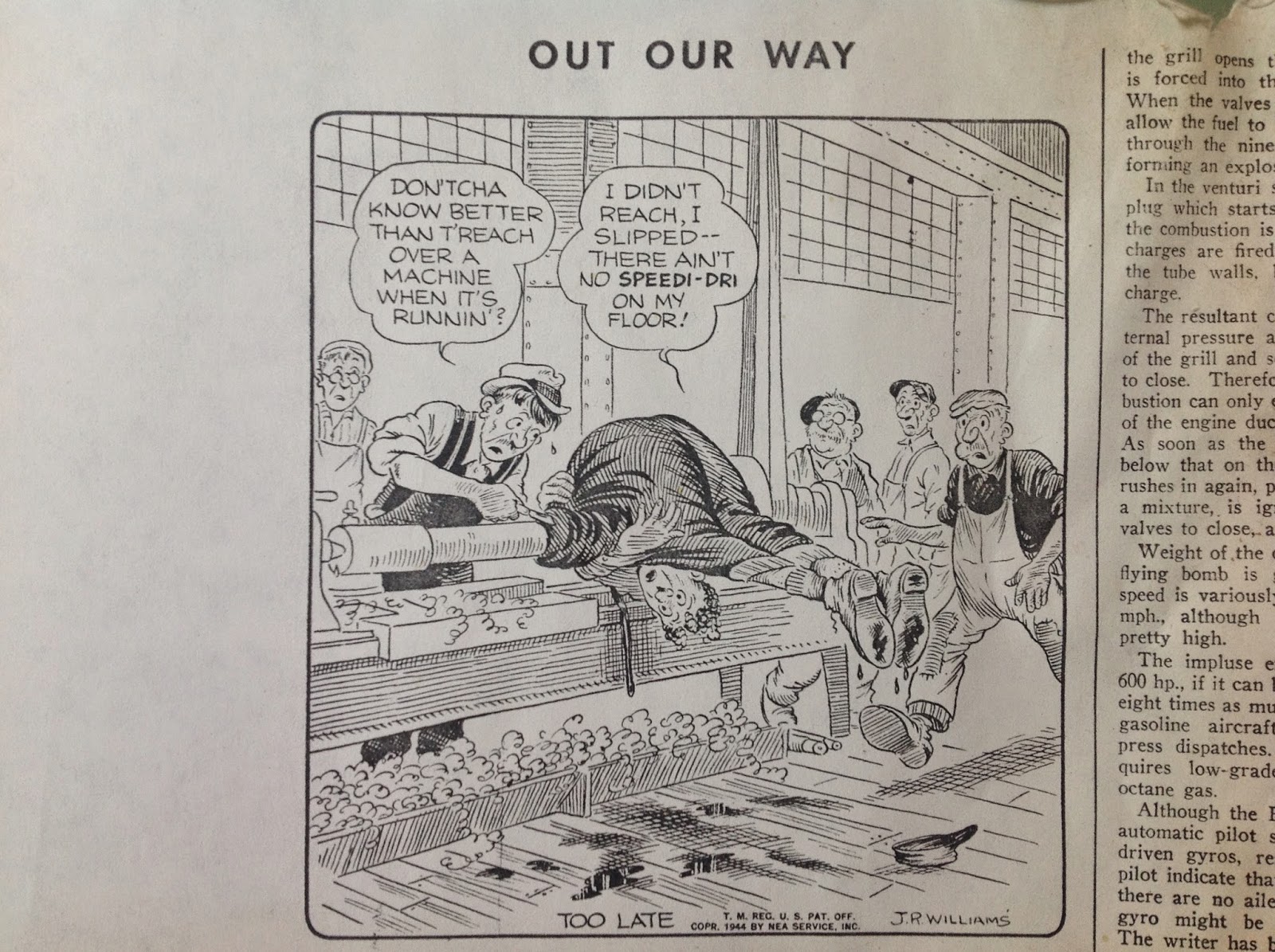 The SCR-584 component is, you will notice from the linked Wikipedia article, is well enough known to the history of science. I gather that AA Command's versions were pretty extensively modified during the course of operations, but Dobinson is silent on the details.

The Mark 9, in spite of being MIT's first computer, gets less attention. The whole analog thing is seen as something of a dead end, but that strikes me as a bit unfair. It is basically just a machine for solving the system of linear approximations of the partial differential equations giving future location of a target of currently known angular bearing and range: 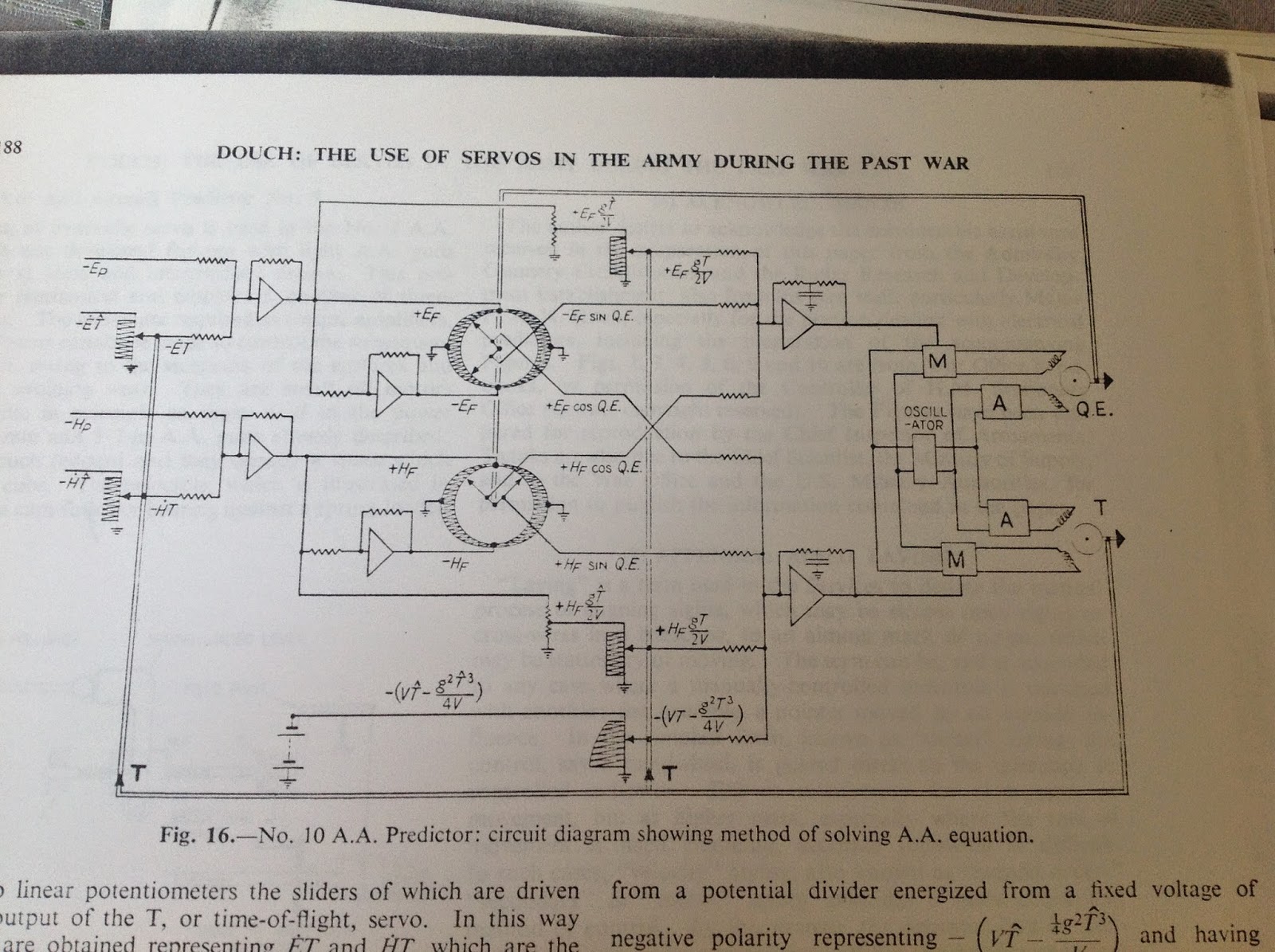 The meat of the problem is that making a solution come out of this bit of electrical jiggery requires the same attention to the mathematics of "stability" as does making sure that the barrel of a 3.7" gun that you are shoving around the sky at high speeds ends up pointing where you want it, as opposed to micro-slewing across a section of the sky near where you want it to point with juddering, sudden motions that are eventually going to destroy the whole mechanism. At some point, "feedback" and "stability" starts looking like the solution to all the world's problems, and, if you are Norbert Wiener, you go not-so-quietly mad.

Need I add that the problem of labour conservation with technically ambitious machines presents policy makers with the crucial problem of maintenance, and ends with the assumption that the reduced-strength crews will have to learn how to maintain their own equipment as they go? Again I say onto the world: the process of automation, when it springs from labour conservation, is not a matter of replacing labour, but of transforming it. (Hopefully, from the point of view of the operators, in a value-added way.)

Never mind: the kind of engineers who obsesses over self-driving cars starts out with the premise that drivers are too dumb to turn a steering wheel; not that they are going to turn truck drivers into computer programmers.