Seventy years ago today, 120,000 men hit the beach. We have a story about what motivated them.

It's not a very good story. It's not untrue, but although Rick Atkinson's Guns at Last Light lyrics-checks The March of the Cameron Men and The Battle Hymn of the Republic, it is the Beer Barrel Polka that comes up again and again, and when a fighter-bomber dropped a package to the Paras at Pegasus Bridge that happened to include a copy of the Daily Mirror announcing the D-Day landings, the men lined up to read the latest installment of Jane. 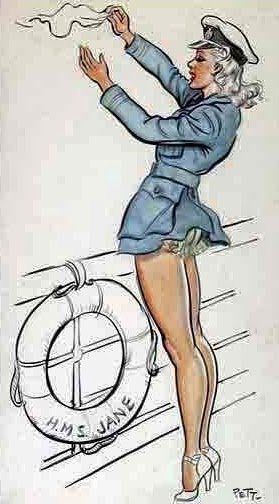 The truth is, they stormed ashore to impress people. Their fiance? Girlfriend? Boyfriend? Secret crush? Their general? Nigel Hamilton's reinterpretation of Monty's generalship makes much of the homoerotic attachment that Montgomery could not hide, and makes the fairly obvious point that it was important to young men. At home they were boys, and, given that they had ended up private soldiers in the infantry, often little regarded boys, some from difficult homes, most from bad schools and bad neighbourhoods.

"Some of our men enlist from having got bastard children — some for minor offences — many more for drink; but you can hardly conceive such a set brought together, and it really is wonderful that we should have made them the fine fellows they are."

It is proprietary, and patronising, but it captures an essential truth. Their general is the first to recognise the change in them, the first to want to touch them, to love them. But that only goes to prove that he is smart, because soon the world will know this of them, that they will deserve what is coming to them when they get home. It is a surprisingly successful style of generalship. (Inevitably.) 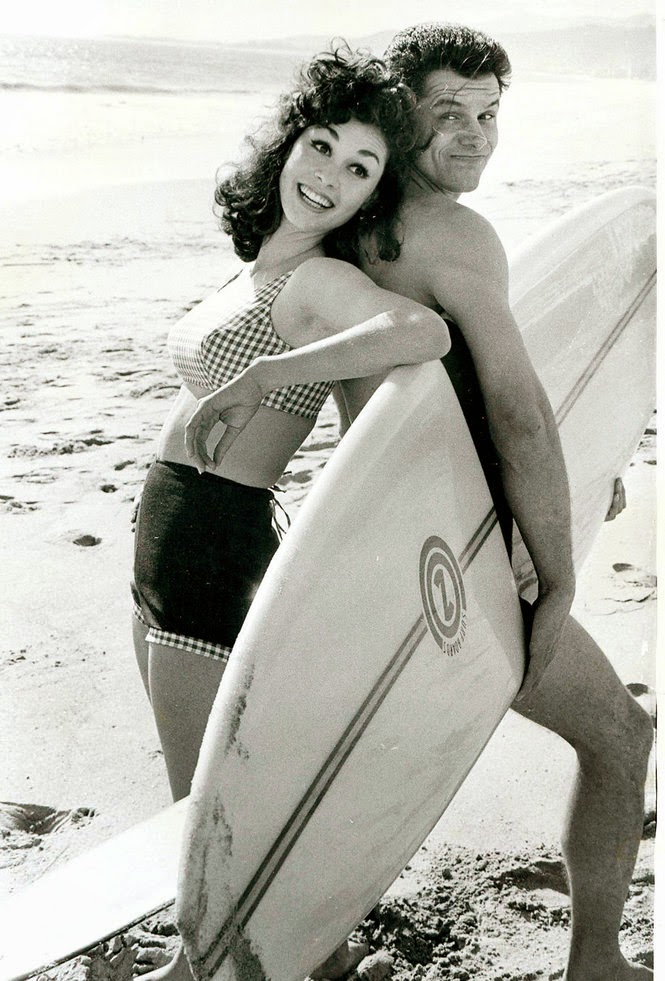 Now here is the hidden secret: a spoonful of sugar makes the medicine go down. 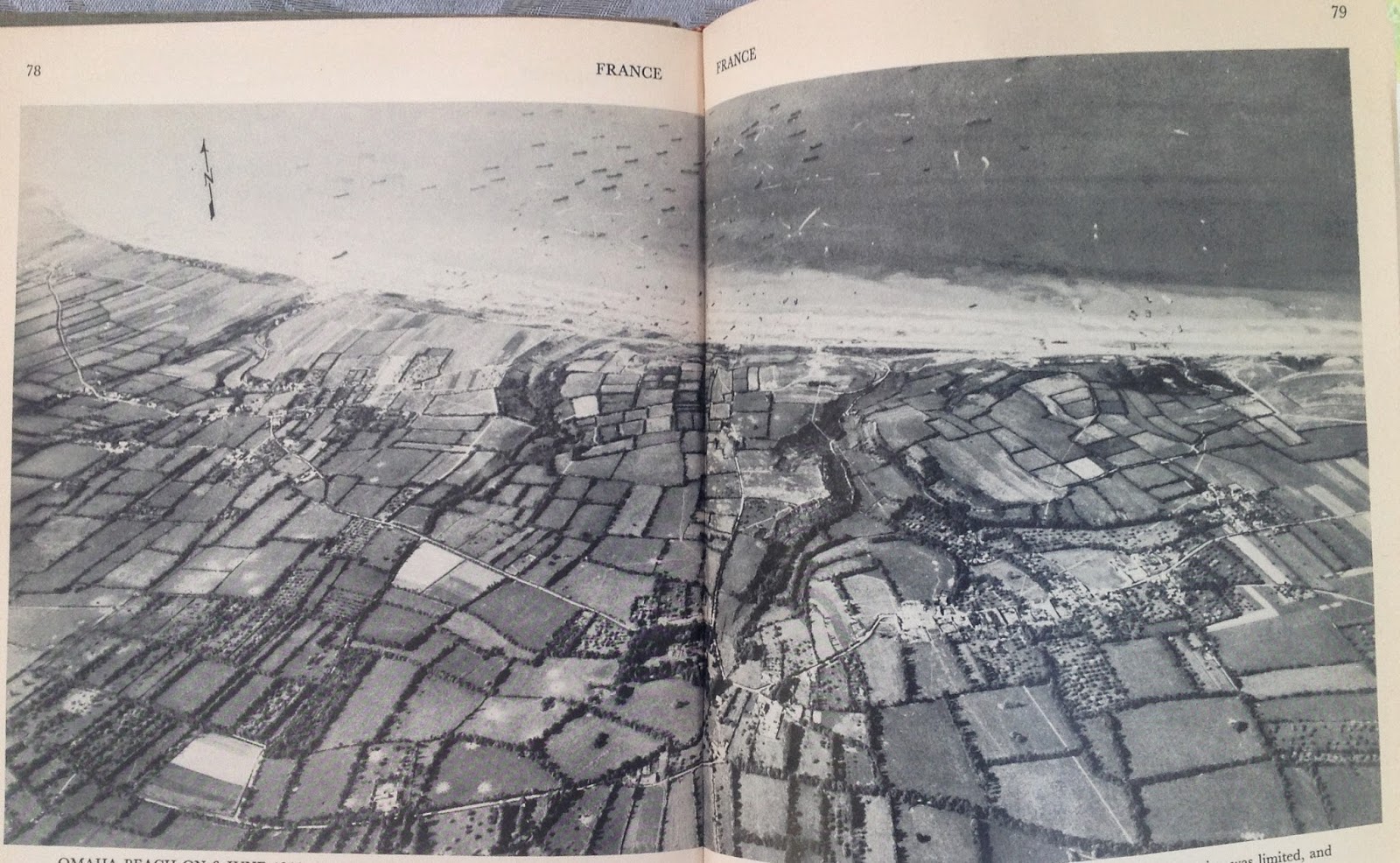 No. One-hundred-twenty thousand men will land today (including, in our old-fashioned diction, a few Nursing Sisters). Eight thousand will become casualties, 2000 on Omaha Beach. Not bad considering the alternative, but a terrible, scarring experience for the participants, which other people are going to cover today, with more pictures, bringing the violence and the gore to life well enough.

In the face of bloody death, a man would shame himself to admit that he is thinking of this:

Telephone wire in 10 mile and 1 mile loops, barely covered by tarps, sitting on a grassy field. Hard enough to load today, and just wait for the rain! 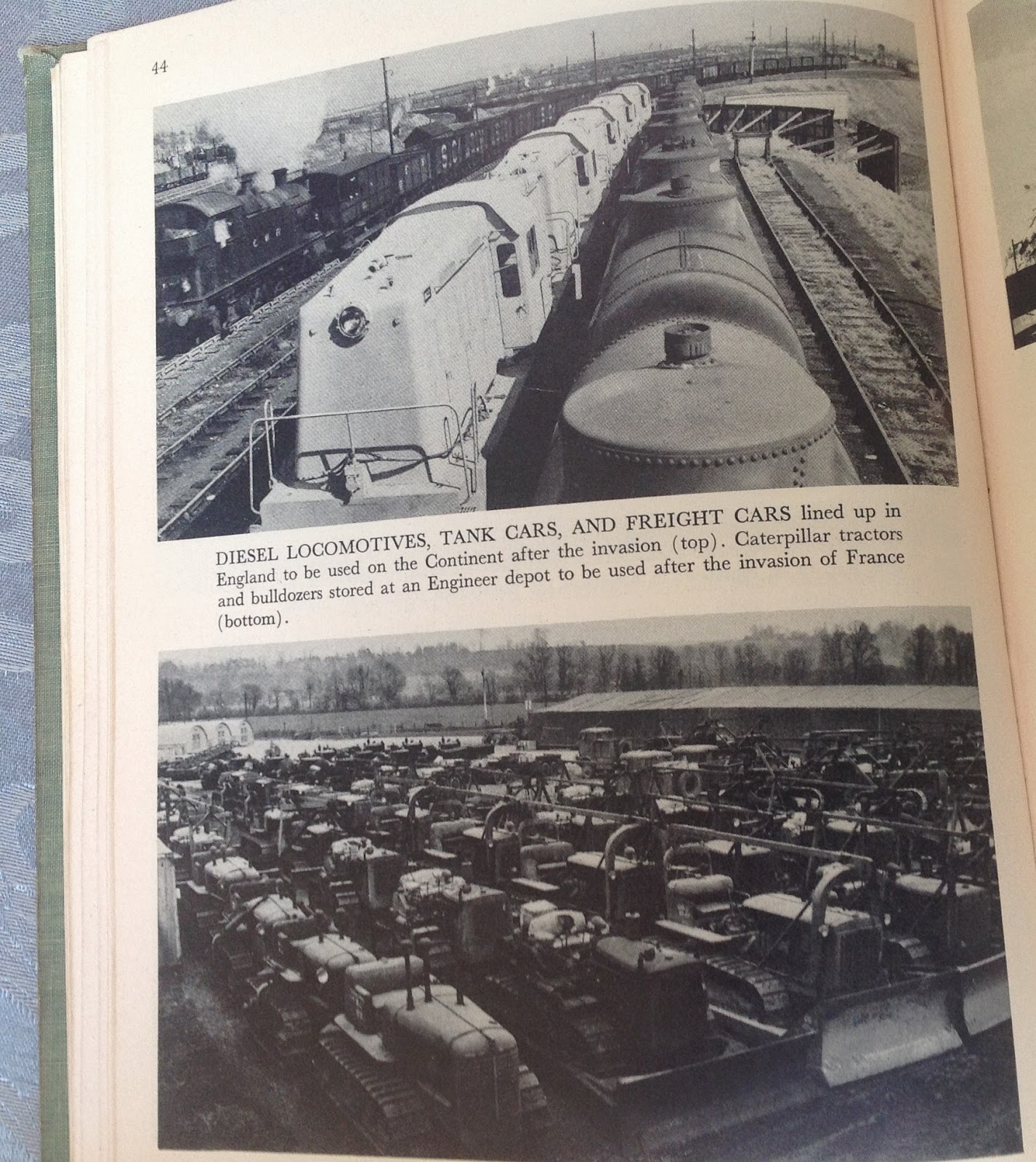 The bulldozers are bad enough. At least some infrastructure has been built to move tanks. Cars and locomotives? Can you even imagine manhandling them across the beach? Can you? 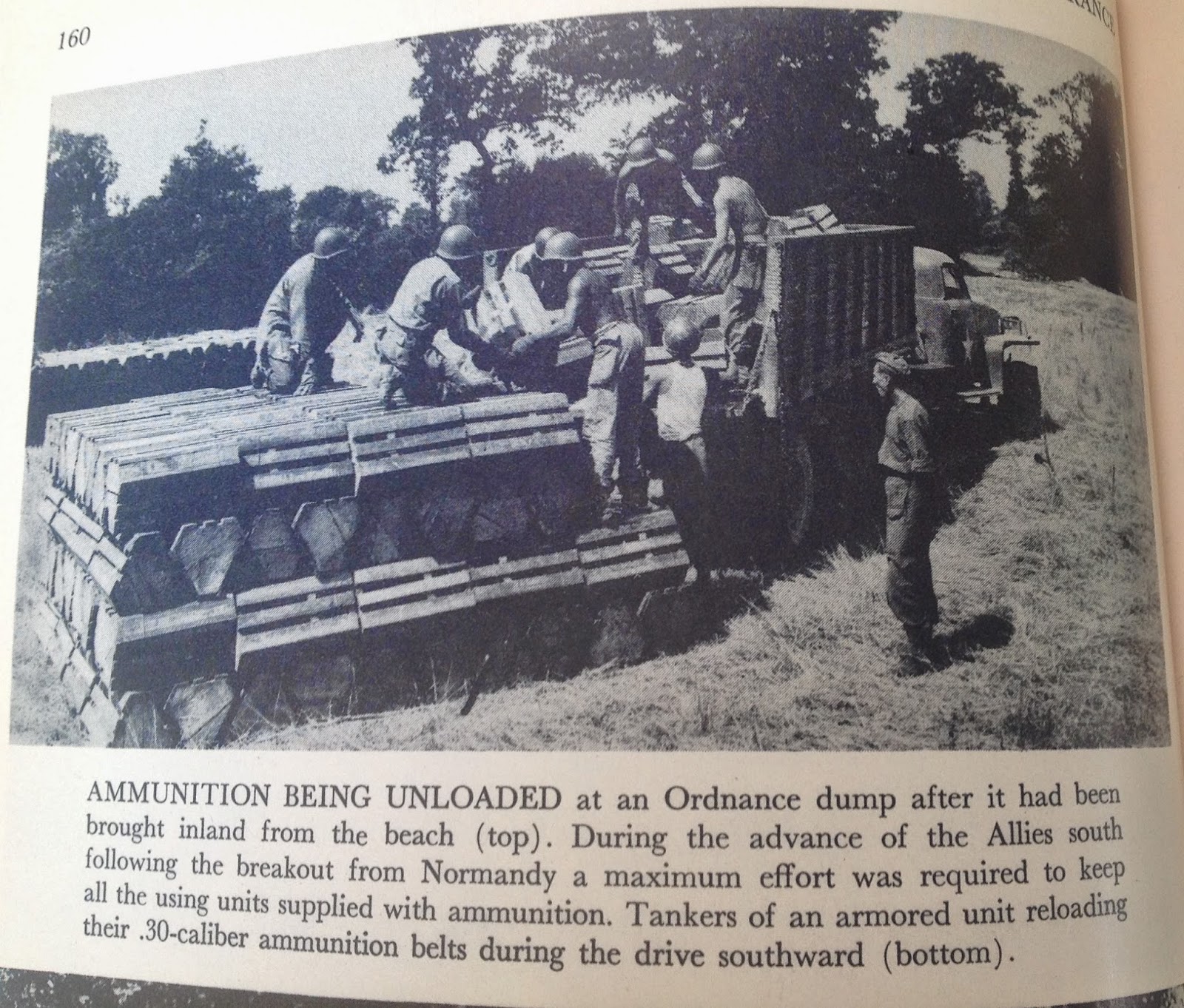 Well then imagine hand-stacking all this ammunition from a two-and-a-half ton truck into a dump in the middle of a field. Because that's the conditions you are going to be loading into. 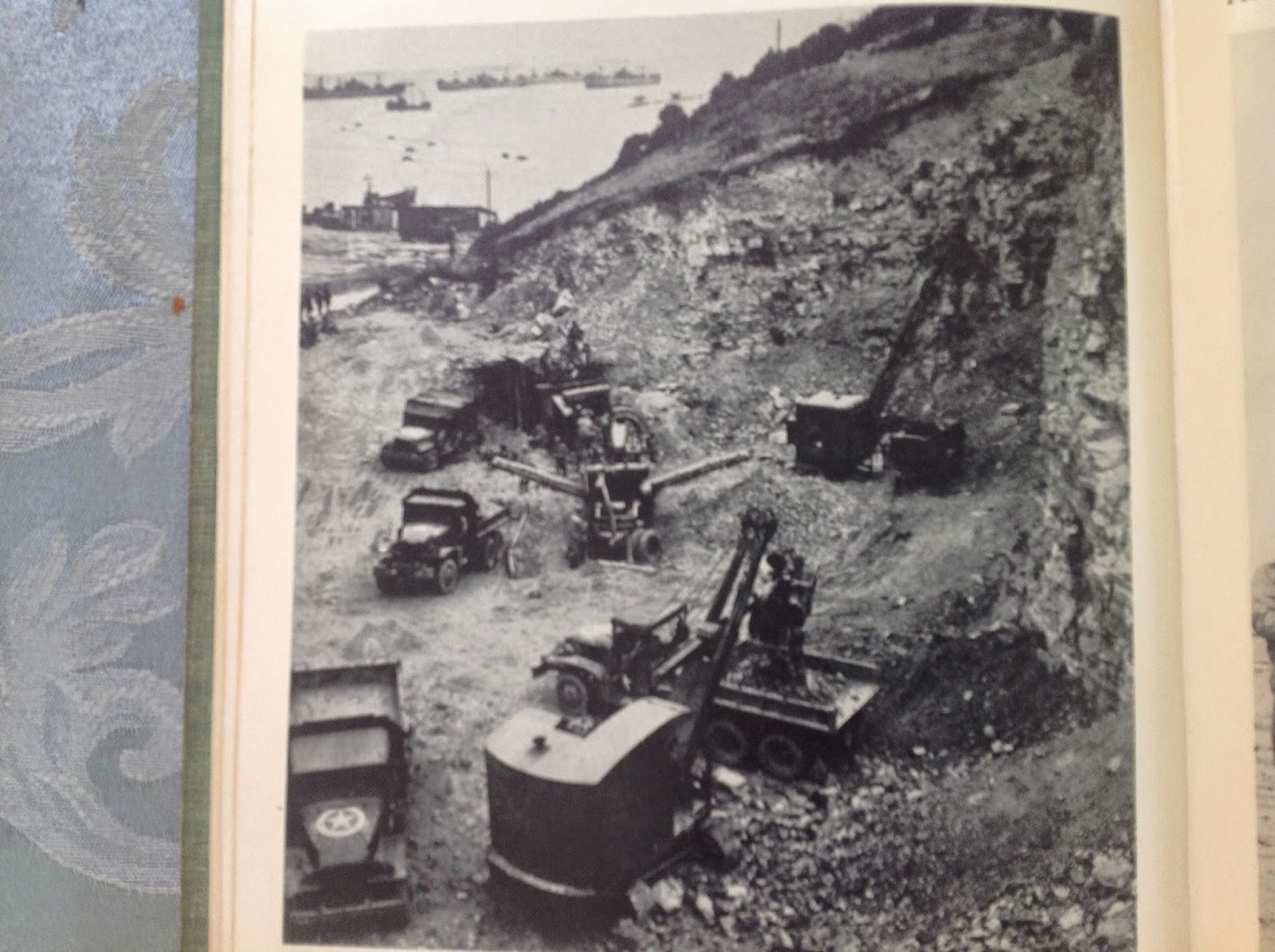 An army group packed into half of a Department? It is going to be standing on the gravel that you break and you hump, ton by ton until you never want to see another stone.

And then for another 120 days after that.

That's the medicine. A man has a choice: to go Croatan and make for the hills and the woods, or to participate. You might think that it is enough to be brave, to fight, to participate. The truth is that you're bloody well going to learn a trade. Go out a would-be warrior, come home a domesticated tradesman.

It may not seem fair, when you are so young and free. But your general loves you so much, and all he wants is for you to go home and to touch, and be touched, the way that he never can. 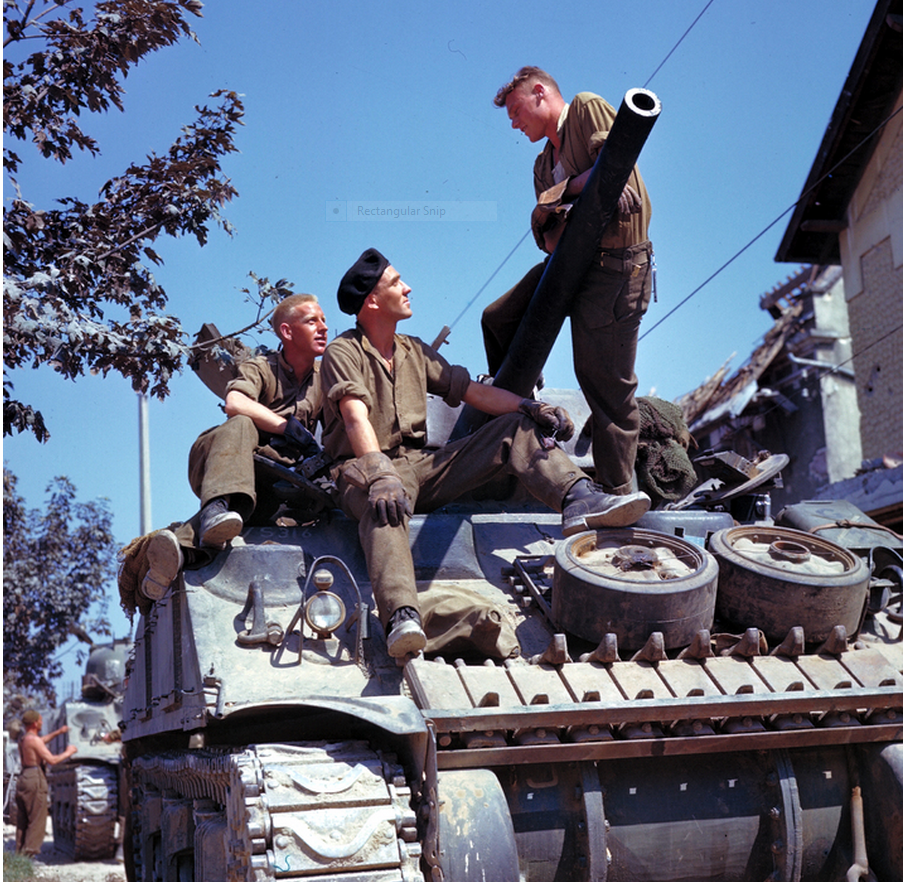 So that's a pause for reflection on a busy day. The climax of this Blog's D-Day coverage is still ten days away.

Although I am going to end the daily postings now and write something else.

*Image credits: The Huffington Post; The U.S. Army in World War II: A Pictorial Record; this skylighters.org, crediting Ali Kefford (and, of course, actual art by Norman Pett, model Christabel Leighton-Porter); and a publicity photo of Annette Funicello and Frankie Avalon, proximate source misplaced.
Posted by Erik Lund at 11:25 AM

Email ThisBlogThis!Share to TwitterShare to FacebookShare to Pinterest
Labels: D-Day, In which I meander, Seventy Years Ago More-or-Less Today, Substructural History of Strategy, Ultimate Secret