C. W. McCall's "Convoy" is corny,and tries way too hard to be authentically corny. It is pointing us in the direction of the Reagan Revolution, which may not have done as well by the everyday trucker as they thought in the day, but...

"It was the dark of the moon on the Sixth of June..."  It's right there in the song. There was a day when it all changed, and now we live like we live now. 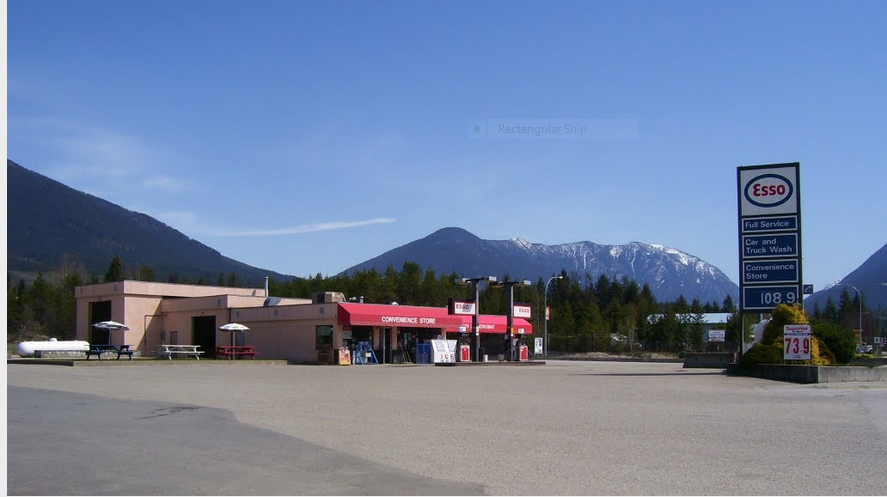 This is Nakusp Esso, photo by kuschk, who has just about single-handedly documented an entire region of my province for Google Earth. There's a reason for that. No-one lives there. 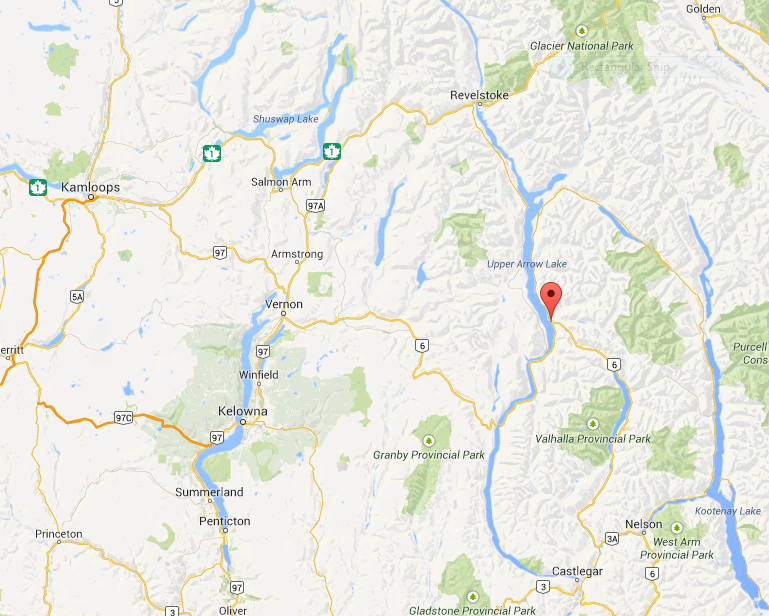 The map snip here fits in Kamloops, Kelowna, Nelson and Castlegar in the margins, with Nakusp in the centre, to orient you. That's on the unlikely possibility that you have heard of even those towns. Nakusp is one of the communities strung together by Provincial Route 6, which is the road you take if you have an allergy to getting places quickly. Mainly, it is for loggers doing loggery things, and tourists. Not surprisingly when this is the gate of the region:


It's a bit of an exaggeration to say that this entire region in the middle of continental British Columbia is only linked to the rest of the province by ferry, as one of the four roads out of it does not have a ferry leg, but it is true enough in spirit to its landlocked isolation.

To come back to the original photo, let me tell you a story about Nakusp Esso, which is only untrue in matters of fact. It was founded by a guy named Al, who went to Normandy with 3 Canadian Division on 6 June 1944. He never talks about it, though, because he drove a truck onto JUNO Beach that day, and for the rest of the campaign, and for all the horrors he saw, Al was privately guilty that he was never actually a real soldier. His ancestors, if he cared to own them, which he did not, rural Canada being what it was in his day, were warriors, ranging up and down the Columbia from the Great Bend north of Revelstoke down to Spokane. At the end of a southwards rove, they would shoot their weapons into the great rock at the narrows that was flooded by the dam at Castlegar, which is why this long stretch of flooded river is called the Arrow Lakes. Al, though, did not canoe. He ran a gas station, and fixed people's cars, following the fitter's trade he learned in the Army.

Marc Bloch, in his French Rural History, (if you don't mind me repeating a bit that I've probably done before) makes heavy going of the way that the profound cultural differences between northern and southern France were shaped by the northern class of "Laboreurs," rural peasants who had the land and the wealth to support a team of horses, and who rented them out to plough farms and haul hay and the like in season. The name and the occupation suggest "peasant," but, at the level of everyday rural life, the laboreur stands out as a veritable working-class aristocrat. From which large farms: hierarchical society, village communes, bocage, Normandy!

Never mind that. That little ferry, parked day in and day out at the tiny community of Fauquier, British Columbia, is part of the world that D-Day made. One more by kuschk:

Start here, I guess? That's a GMC CCKW, one of a number of all wheel drive trucks with a specified 12 square foot cargo area and 2-and-a-half ton rated off-road payload. The GMC variant was delivered with a 4.4 L inline gas engine rated at 91 hp (68 kW) at 2750rpm and 293 N·m at 1400rpm, with a 5 speed transmission driving a 2 speed transfer case, which also selectively engaged and disengaged the front axle drive. 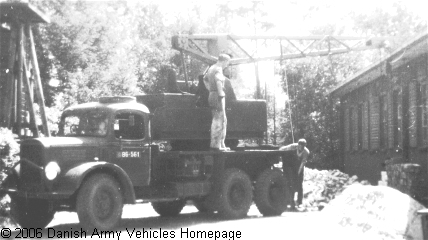 An Austin K5 variant, as delivered to the postwar Danish Army. As you can see, I had to hunt around a bit to find a picture of a British 4x6. Apparently, the world (and British motoring enthusiasts) are embarrassed by the standard British Army "A" Echelon lorry. According to Bill Buckingham, it was a company of 33 RASC 4x6 trucks that were the first to relieve the Paras at Pegasus Bridge, twenty minutes before Lord Lovat's Commandos, but that does not excuse a machine that was  underpowered compared with their American counterparts (this one is rated at 84hp at 3000rpm), and almost embarrassingly primitive. The 6x4 multi-wheel drive started out in the early 1930s with an extra axle added behind the main rear axle, with a wrapping chains around the wheels to make a sort-of half-track. The automotive arrangements of the "lorry" fleet of 1944 was not much more sophisticated, and the reason is embarrassingly Barnettian. The Americans could afford all wheel drive on the scale needed to equip their entire A echelon. The British could not, and while the American Transportation Corps felt some envy at the lower cost and superior road mileage of the British type (citation needed),* that envy is a forgotten emotion of 1946. You do not want minor increments in efficiency in the A echelon. You want major improvements in the B.**

The last time I talked about this, I wanted to cover B echelon as it exists now. There was this weird jump our society did from considering the 2-and-a-half-ton 6x6, or the 3 ton 4x6 to be "trucks," to talking about tractor-trailers. Along the way, with a very broad brush in rough strokes, I covered one aspect of the incipient Northwestern European logistics crisis: the failure of the United States Army's 10 ton truck procurement effort.

Who remembers the 10 ton truck? The British Commonwealth forces don't. They are going ashore backed up by  Leyland Hippos (Canadian owner/operator/mechanic Bill Weatherstone's reminiscence, since apparently "real" history does not acknowledge the Diesel Gypsy). A newcomer to the battlefield on D-Day, the Hippo succeeds earlier 10 ton trucks used in North Africa, now clogging the roads in Italy. Its day soon will come. 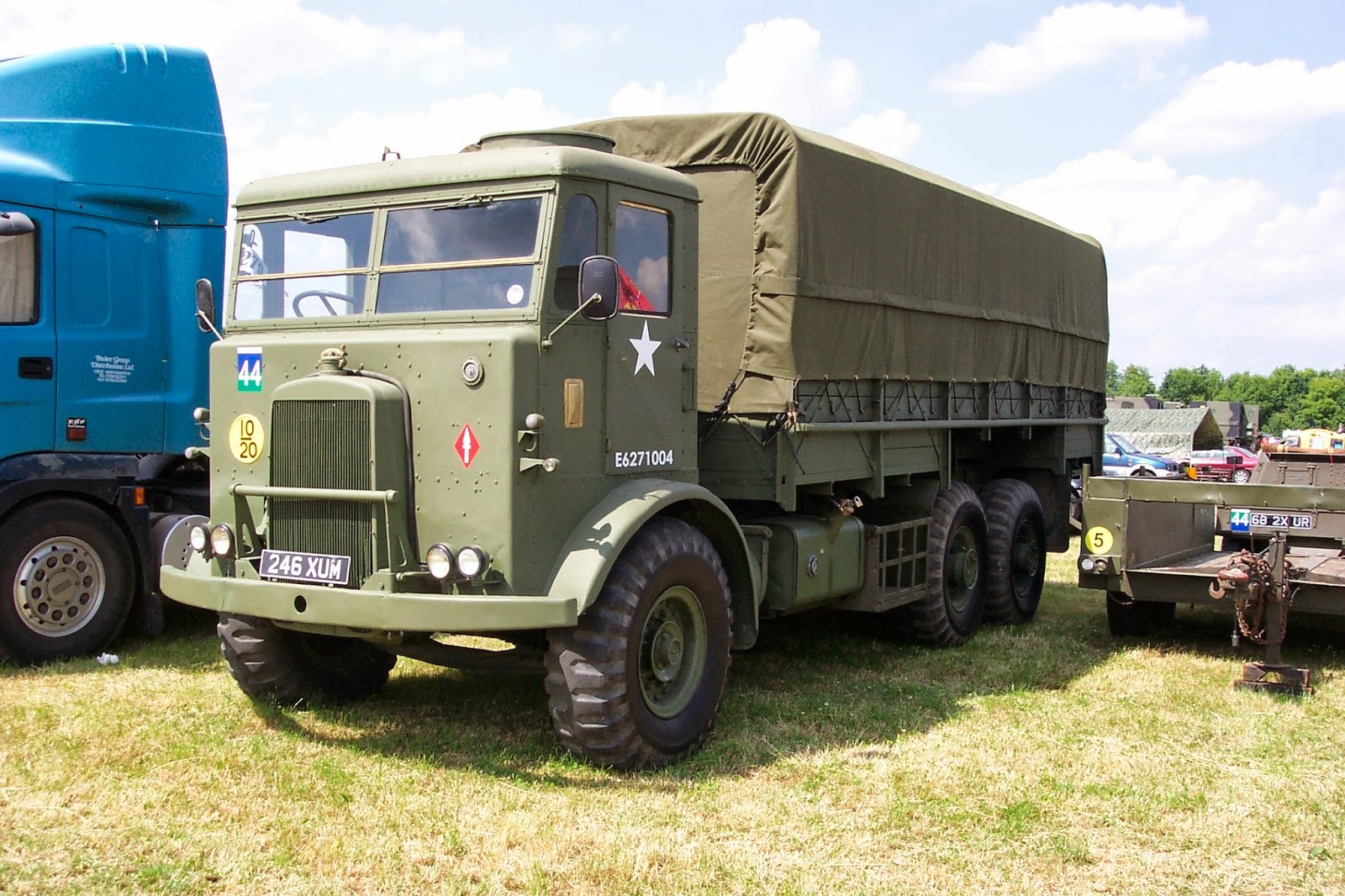 The United States Army is going to have to wait for Korea for its M125s. The reason is pretty simple:. Assuming that the automotives of the Hippo are the same as that of the postwar Tiger bus, we can compare its automotives (cut-and-paste from Wikipedia)


With the Hercules DXFE of the Diamond T: bigger, with more potential hp, but a straight conversion of the company's existing gasoline engine, with the addition of more rugged bearings and crankshafts supplied by the parent company (the ubiquitous Timken) for limited export production.

The American industry does not yet provide a diesel engine in the right size, because it has not been challenged to move beyond gasoline to the higher compression, hence more rugged parts, of the big diesel plant. Even if a manufacturer could have been called upon to take a flier into the weird world of very large, high-torque-at-low rpm gasoline engines such a vehicle would have required, the Allies are having enough trouble adapting existing engines to the leaded 80 octane gas they are being forced to use.

It will be deuce-and-a-halfs at Normandy. Kind of an important detail when so much of the supply the Allies will consume in Normandy is going to be delivered in automotive ferries.

*It's in a post war number of the Journal of the Society of Automotive Engineers. I'll dig it out at some point. I swear it! Just not today, if it means delaying breakfast at the Cornerstone Cafe another minute. Growling stomachs clearly take precedence over scholarship, and they do a nice sausage.
**K. M. F. Hedges, "War-Time Development of Military Road Vehicles," Engineering, Dec 21 1945. 525--8.
Posted by Erik Lund at 9:14 AM