Potlach the Sea: The Candlemaker's Version

On 12 August, 1819, the whaleship Essex (owner Gideon Folger, 1, 2) departed Nantucket Island for a two-and-a-half year cruise, 29 year-old Captain George Pollard commanding, with 21-year-old first mate, Owen Chase, another veteran of the ship's previous, very lucky voyage.
This one was not to be so lucky. Rounding Cape Horn after a disproportionate five weeks of trying,* Essex entered the Pacific whaling grounds in January of 1820, heading northwards first for the west coast of South America, and then for the "offshore ground," a newly-discovered whaling ground between 5 and 10 degrees South and 105 and 125 degrees West. Before cruising this vast area, Essex headed towards Floreana Island in the Galapagos to water and hunt tortoises. There, a crewman set a fire as a prank that turned into an island-devouring wildfire.

Difficult whaling suggested that nature might be getting ready for a suitably ironic revenge, but since it was thirty years yet to the publication of Moby Dick, the whalers could have no clue about the Dramatic Literary Symbolism coming their way. (If they had, they might have done things differently, if only to spare generations of their descendants from the agony of writing essays on whether the Great White Whale is an allegory or a metaphor.) On 20 November, 1820, a bull sperm whale rammed Essex twice and left it in a sinking condition.

If my facetious tone suggests that I am taking this with a bit of a grain of salt, it is because I am. The accident, as described, is implausible. There is a raging debate over whether this kind of behaviour is at all typical of bull sperm whales, but that is not the point. It is a sad whaler that is lost to stove-in sides, and the story describes a freak-of-science 85ft bull ramming the 88ft Essex bow-on at "twice" a sperm whale's normal surface speed of 24 knots. (Sperm whales are fast!) That said, it was not unknown for a whaler to return to Nantucket leaking a thousand strokes an hour. It would, eventually, serve all concerned well to present the loss of Essex as a freak episode rather than as an example of poor workplace safety and, as we shall see, poor management.

So the survivors of the crew abandoned the ship on three whale boats. At this point, the crew of Ann Alexander, an old ship in poor condition which was lost to a side-stoving sperm whale in 1861, elected to  head north to pick up the rainy, west-trending tropical winds that would have taken them to Polynesia had they not been picked up three days later. Bligh, under similar conditions and not that far away, took a single launch weighed down by 19 men on a 47 day, 4000 mile voyage to Timor.

Bligh had the good sense to head downwind. The crew of the Essex, on the other hand, voted to head south towards prevailing winds that might, with luck, take them to South America. The logic was that they preferred to avoid the "cannibal isles" of the Marquesas and Societies.

This they did not do. The boats touched at Henderson Island, today a remote and uninhabited dependency (but with its own website!) of the Pitcairn Islands territory, 120 miles from that island. Three sailors decided to stay on Henderson, in spite of its paucity of water. 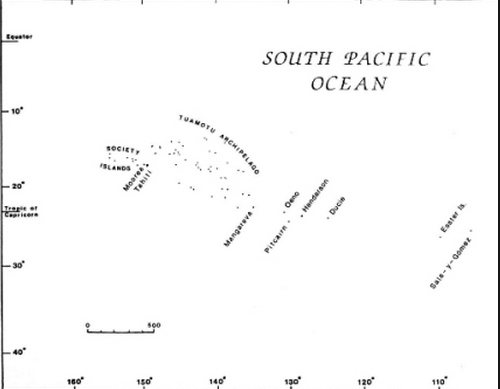 The ones who didn't underwent gruesome suffering and, ultimately, cannibalism. (This was unfortunate for the victims, but at least ensured that the memoirs of the survivors would sell well.) It's all either a tragedy in "the heart of the sea," or a Darwin Awards-level performance, and I'm personally inclined to vote the latter after reading the appalling statistics compiled in Custom of the Sea. who would have guessed that the losers in  "cannibal ballots" would turn out to be disproportionately from the bottom ranks of the shipboard social hierarchy?

Whatever. I'm sure that the self-serving narratives of Captain Pollard and Owen Chase are entirely accurate.

In lieu of pencil sketches of the loss of the Essex, which do not do justice to what was likely not a very visually dramatic episode anyway, due to boats being low in the water and whales even lower, here is a more picturesque Google search item for "wreck of the Essex:" boats moored at the west end of the Langmere Wharf, Essex, England.
I've a feeling that the ummooring days of the boats on the foreground are over.

Email ThisBlogThis!Share to TwitterShare to FacebookShare to Pinterest
Labels: Gathering the Bones, Pirate History of the Atlantic, Plantation of the Pacific, Port Alice, Unmasking the Australian Menace 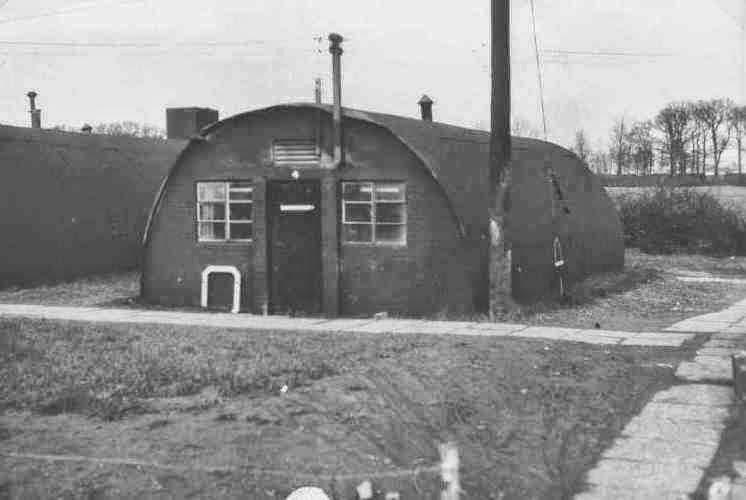 I understand that this letter is to reach you in London, where you are consulting about moving your unit to Sydney, and investigating Sir Eric's murder. I include a report from Uncle George on the subject of the doings of the London relatives and some encounters he had at the Admiralty in 1939. I confess that it was pure annoyance that led me to finger the Soongs. I was as surprised as you were to find that Du's axmen were in London. Now I wonder if I have the instincts of my father's daughter.

But enough of such ugly matters --even if I return to the Spokane lands a few times below. You will be glad to know that your son will be taking some instrumentation courses, as planned. He will graduate in June and ship out for --wherever the Fleet is by that time, and I can't tell anyone who can't read a map and figure out what large island is right between Luzon and Japan, and within easy air range of Kyushu.) Miss V_. C_. has seen Lieutenant A_ several times. In an attempt to impress her, he reports that he has been called in to help the FBI along the docks. Apparently, the Army was in town looking for communists, made a hash of things, by trying to pick up foreign sailor girls, and in the meantime started enough actual investigations that the FBI had to step in. With bits involving boats, the FBI asked for some Navy men, and here he is.

It's a measure of the boy's complete naivete that he not only fingers the subjects of the surveillance (the Russians, obviously), but gives away the real story, which is that the Army's "handpicked" men were cruising the docks. (I'm not sure if Miss V_C._ has picked up that the "agents" probably weren't interested in female sailors and doesn't want to talk about it with an old woman of 26 years, or that there are limits to her precocity. I rather hope the last, frankly. She's too young to trouble herself with such things.)

Another interesting tidbit is the news that what takes him to Stanford, apart from buttering up the Engineer, is work at a lab there on some kind of infrared eye "motion detector" that picks up interference beats. Not really seeing the relevance, I asked James, who speculates that if it were sensitive enough, you could aim it at a wall and pick up sounds through the thermocouple detector. He is skeptical that it is actually practical, but an electronic eavesdropper of that kind would obviate the need to plant microphones.

Fat Chow was seen off with teary embraces from Miss v. Q. on the train to Portland, from whence he will hopefully follow the smugglers' route from Vladivostok to Nagasaki. It really does sound like the maddest thing he's done yet, and all for the sake of extracting the last few Hawaii dollars from our Satsuma friends. I am sure that the Earl has his reasons, though.

Miss v. Q. tries not to show her fears. She will definitely be teaching German at Berkeley starting next Fall, on the strength of Professor K_.'s kind recommendation, and in the mean time is hosting some private classes. (Those who have read the book are thrilled at the history of the flat!) Mrs. Wong, and how strange that is to say, is getting ready for the birth, and has found work keeping books for a local restaurant. There is now talk that the Navy might send Tommy for a doctorate after the war. They really must be hard up for men if they are willing to invest that much in a Chinese boy! 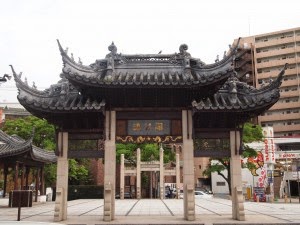 PS I wrote the family letter part of this last, so things that are on my mind are still on my mind. I won't say anything more here than that I spent much of the newsletter more-or-less engaged with The Economist, which has come out in the last two weeks against Lord Swinton's plans for rehousing Britain. I confess to finding its arguments more than ordinarily disagreeable --I'm not entirely sure why. Because I am more on the side of Swinton's estimate of the likely future need for new home construction in Britain? Because I want to defend the economic value of homebuilding in America? Because I sense self-interest behind The Economist's position? I am sure that you are thinking that it is because my mind has turned to thoughts of nesting, as a woman's mind is wont to do in my condition. Am I brooding? I'm not sure.

I suppose that what I am saying is that as soon as I understand my own mind. Or until these thoughts are driven away by the blessed event.

The Flowers of Edo: The Firebombing of Tokyo, Franklin and the R-3350

The seventieth anniversary of the firebombing of Tokyo comes with the first darkness of March 10th, and the burning of Franklin not for another nine days. So this is not a perfect anniversary post. It is certainly not a useful 70th anniversary of the Wright Duplex Cyclone, the 55 litre engine which, at this point in the war, had a habit of catching fire in mid-air. Close enough, I'll say, and leave it at that.

The  connection between the three is death by fire, but I will leave the burning men and cities below the fold. Here's a more hopeful intimation of a new world order to come. Like a phoenix from the ashes, etc, etc. 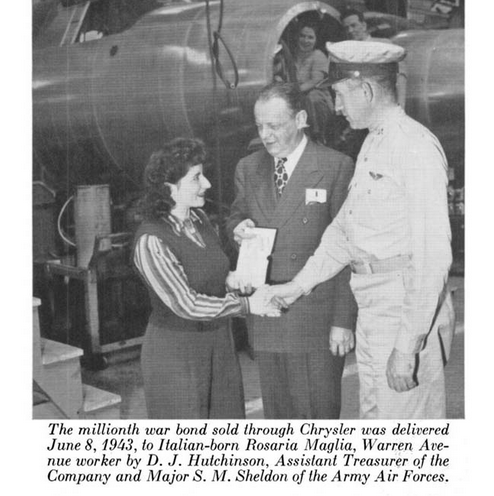 Next week, I need to talk about death by fire, on land, at sea and in the air. The week after, my March will be used up, since I'll need to do two techblogging posts in a row. In the mean time, before we visit the city that suffered in reality what we imagine happened to Dresden (bad as Dresden was), or an even more savage and inescapable fire that demonstrated once and for all that you cannot cram 90 airplanes onto 27,000 tons, let's do something fun. (I'd write "easy," but somehow this ended up taking up most of the afternoon on a day off, and I still have to shop for a new bike today!)**

Email ThisBlogThis!Share to TwitterShare to FacebookShare to Pinterest
Labels: Blog Comment Follow-Up, Gathering the Bones, It's All About Me, Plantation of the Pacific, Port Alice
Newer Posts Older Posts Home
Subscribe to: Posts (Atom)