You wanted to know at first word about Reggie's summer assignment. He will be attached to VP-M-1 at Barbers Point NAS in Hawaii, where he will be trying to wedge more radio receivers into Lockheed Neptunes than any airplane should have to carry. For "weather reconnaissance." "Weather reconnaissance" is in a bit of an ebb at the moment, but will probably come back in full force when the Russian famine is over and the 1948 election is a bit closer at hand. Who knows? Perhaps he will gather some "weather reconnaissance" that is useful to Mrs. C and her friends in Virginia.

"Miss V.C.'s" plans are in flux, but I expect that she will go east to be near "Mr. A." Perhaps she will try to pick up some hints in advance of her seniors' thesis research next year; she remains convinced that a sinister secret concerning the Oregon Scandal is hiding somewhere in the Junior College's archives.

Uncle George has telegraphed that his flight has arrived safely in Scotland. However, it looks like he will be detained by weather and will not be able to get to London in time for the World Shipping Conference, which is a pity. On the other hand, his friend's business partner is also detained, as he missed his berth on the Queen Mary. So it looks like not much advance business will be done before you arrive in England on the matter of, shall we say, securing industrially-necessary supplies of silver nitrate for any film or photography business we might involve ourselves in, over in England.

In the absence of Uncle George, James has stepped in to arrange to put the good old Swallow on the Atlantic run. It will make its first berth in Liverpool on 7 April, if all goes according to plan, and James estimates that it has room for six tons of metal in Great-Uncle's old statesroom. Just to give you an idea of what you have to work with.

In the mean time, I would be most grateful for any distractions you can find, as Dr. Rivers has put me on bed rest until the blessed event. I'm not completely isolated, as I have James and Fanny. Miss J has branched out in her work to assist Fanny, and has been very kind in bringing the twins to see me along with Vickie. I could wish that I saw the same spirit of care and solicitude from Miss M., but she is a fine physical therapist, and not devoid of human kindness. She has even taken to bringing me cookies in bed. Cookies that she baked herself --and I can say no more. At least they are not boring! 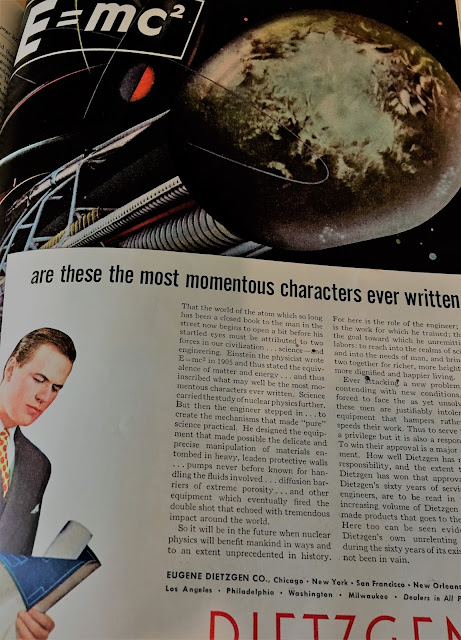 Following Up Follow Ups About Following Up: Exports, Fashion and the Warfare State

"Why are they wrong? Because their paradigm is the postwar neo-liberal (or whatever we're calling it now) world order, in which democracies and semi-democracies trade with each other in pursuit of shared prosperity, in which the only unsightly slopes on the otherwise level playing field of comparative advantage are tariffs, subsidies and gaming the exchange rate. The only way in which the state is supposed to intervene is by producing (and equitably disbursing) unlimited quantities of education/research spending; and by fine-tuning tax policy."


This is quite untrue. Allen's model (as well are critiques of Allen's model) are perfectly compatible with a world in which external trade is driven by mercantilism and imperialism. In fact, in his book Allen explicitly stresses the importance of imperialism in enlarging the domestic market, and market size is an important element of his model."


This is a blog about hillside pastures, fodder crops and the things (like cavalry warfare) that flow from them;

And, oh, yes. The endogeneity of technological change.  I hope that it is also a place where I can be unembarrassed about offering an obsequious welcome and preemptive apology to such a distinguished visitor without being embarrassed. Watching the debut of Iron Fist instead of replying at greater length? About that I'm embarrassed.

Missing the Point: On The Economic Advantages of Eighteenth Century England

You will notice a "Blog Comment Follow-Up" tag this week.


And how! Anyway, this is Brad Delong quoting "the mysterious Pseudoerasmus" commenting on Robert Allen.


I love the work of Robert Allen... steel... the Soviet Union... English agriculture. And his little book on global economic history—is there a greater marvel of illuminating concision than that?... . . . Yet I always find myself in the peculiar position of loving his work like a fan-girl and disagreeing with so much of it. In particular, I’m sceptical of his theory of the Industrial Revolution.

Allen has been advocating... [that] England’s high wages relative to its cheap energy and low capital costs biased technical innovation in favour of labour-saving equipment, and that is why it was cost-effective to industrialise in England first, before the rest of Europe (let alone Asia).... Allen’s is not a monocausal theory... but his distinctive contribution is the high-wage economy.... The theory is appealing, in part, because the technological innovations of the early Industrial Revolution were not exactly rocket science (a phrase used by Allen himself), so one wonders why they weren’t invented earlier and elsewhere. (Mokyr paraphrasing Cardwell said something like nothing invented in the early IR period would have puzzled Archimedes.) But... as Mokyr has tirelessly argued, inventions were too widespread across British society to be a matter of just the right incentives and expanding markets—and this is a point now being massively amplified by Anton Howes....

These are skillful economic historians, well-grounded in the data, and it would be the height of folly for me to say that they are wrong.

The Fall of Rome, IX: Transhumance and Local Elites

Transhumant pastoral agriculture is the movement of herds of livestock from one pasture, for fairly obvious reasons.

That being said, there is "transhumant" agriculture, and "transhumant agriculture." On at least two occasions in the last millennium, herding peoples have moved between the Dzungarian Basin north of Urumchi in the Xinjiang Uighur Autonomous Region and the Volga steppes north of the Caspian Sea in Russia; in the 1870s, sheep were routinely herded from the Midwest around Chicago to ranges in Nevada, Idaho, Oregon, and back. This is long distance transhumance, and clearly a very different thing than having a farm at the bottom of a mountain/on the bench above a drowning river valley, and taking the sheep to the fodder in season.

The argument here is that the fall of the Roman Empire (and by that I mean the crisis of the Third Century) is linked too, but not caused by, the breakdown of long-distance transhumant pastoral agriculture. It's not a new argument, in general, but the particular sequence of events I am pushing is perhaps somewhat novel. More importantly, the evidence to support the argument is accumulating. Which is why this post --apart from my needing a break from more ambitious projects.

First of all, obviously long-distance transhumant agriculture is primordial. Take the "agriculture" out, and we humans have been doing it for a very long time, because it's just another way of saying that they're following the herds, which organise themselves for "transhumance" perfectly well without human intervention.

(This is where I link to the "Buffalo Trace" that became America's first interstate, and invited everyone to wonder at the depths and mysteries of the founding of the United States, at the first glimmers of the written record.)

Here's a picture of the sheep moving out of a paddock on a big Australian "station," as they call them, because  Australians speak English funny. 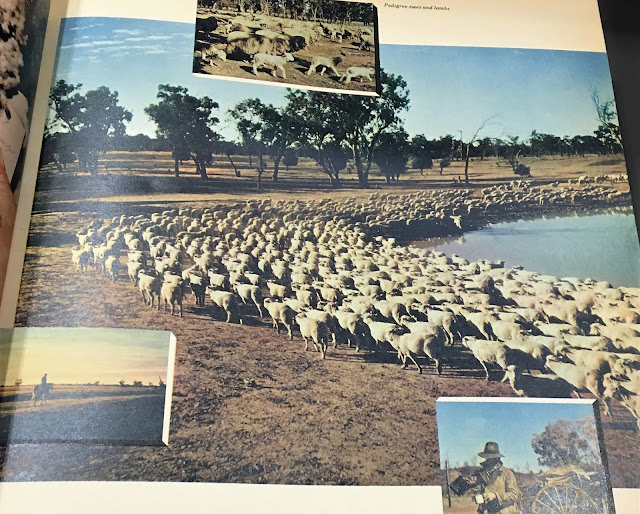 The condition of the top cover in the foreground demonstrates why you would want to transhumant. Ah ha, you may say! Isn't transhumant herding between high, mountain pastures, and low ones. Aren't we all romantic about it. Didn't the Silencers have an inadvertent hit when they recorded a rock version of the classic Scottish folk air, Wild Mountain Thyme? Why, yes, they did, and yes, it sometimes is.

That Milton. Wild and crazy guy. So, if Australians should decide to focus on producing sheep, nature has put a pretty big obstacle in their way, in that their country is pretty darn flat, with an average elevation of 330 m. I wrote that first sentence, editing not included, before I actually looked up my facts. It is a lot higher than I expected, and for a moment I was wondering if the intuition that guided my comment above was wrong. Fortunately, 330m turns out to be the lowest for any continent, Wikipedia says). 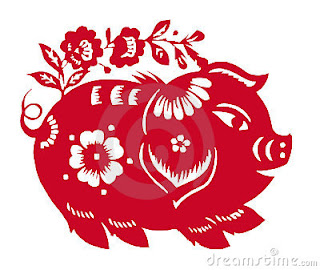 I know that as a proper English girl you don't really let your hair down for the Lunar New Year, and in my state it's hard for me to be any wilder; but, nevertheless, happy Year of the Pig! You will have received Arcadia's traditional New Year's gift, and a little something more in memory of last summer.

Also this! Which you may or may not think is anything like a gift. If you detect a subtle thread running through this letter, it is that people are just about fed up with air crashes this winter, and this "Instrument Landing System" thing might be just the ticket. Westinghouse seems to have the inside track, but Uncle George is not talking about anything so reasonable as increasing the family investment in that old New York Stock Exchange reliable.  Nor Bell or General Electric, either. Rather, he wants to make a major investment in a Boston-area company which has already come to our attention, but which still seems like an outside chance --Uncle George's favourite.

So, if you do read this, you're supposed to end up thinking, "Why, you know what might stop all these air crashes? A big investment in Raytheon!"  I'm not sure how you're to come to that conclusion, so I'm spoiling it a little.

I would say more about family matters,but I am pressed for time, and you have my recent post, anyway.


Again, best in the new year, Your Loving Cousin,
"GRACE."