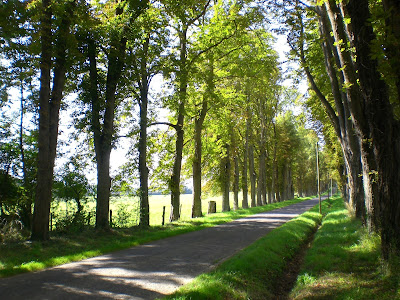 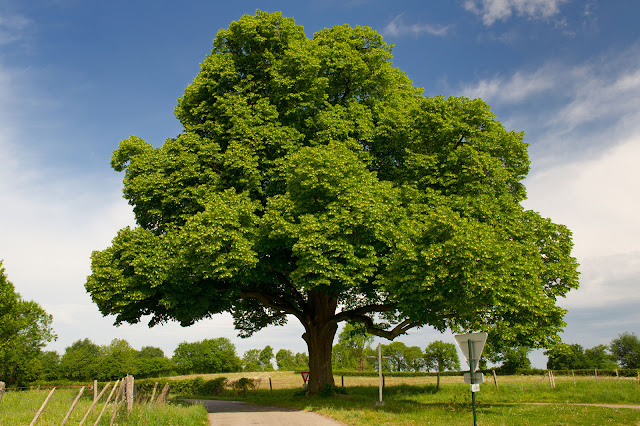 The European chestnut was, and is, widely planted along the roads. A rapidly-growing tree that routinely reaches 30 meters in height and 3 meters in diameter, the only objection to it is that it is an understory tree, but the initial planting along a roadside pretty much has to be a sun-tolerant tree like the fast-growing larch, which will eventually be taken over and shaded out by mast trees like chestnuts in the fullness of time. Mast trees like chestnuts will be seeded wherever livestock go, and that certainly includes roads!

The American chestnut, on the other hand, like the elm, is nearly extinct. Indeed, there is a bit of a just so story about the North American chestnut in the early pages of Jared Diamond's Guns, Germs and Steel that was on my mind when I returned to Vancouver in 1998 and briefly stayed at my sister's old house in North Vancouver, amply shaded by a minor grove of our native Western Hemisphere horse chestnut (Aesculus, or the buckeye)

As I understood it then, the sweet chestnut had made no purchase in North America, for whatever reason, and that was why the chestnuts we sell in grocery stores at Christmas time are brought over from Europe. This vague impression I retained until two weeks ago, when I learned that North America had a native American chestnut that was obliterated by blight in the first decade of the Twentieth Century, much like the Dutch elm plague of the 1940s and 1950s.

Something something losing one species of trees being a misfortune, and two looking like carelessness. The story, as I have it, is that there were between two and five billion American chestnuts in the Eastern seaboard forests in 1900, constituting, says Wikipedia, between 25 and 30% of all hardwood trees. It's probably an indication of just how cynical I am that I am instinctively skeptical of the magnitude of this botanical holocaust, and if you ever hear me start talking about gas chambers and Auschwitz, I hereby authorise an intervention in advance.

But that's beside the point. Time's coverage from way back in 1950 identifies the Chinese chestnut as a blight-resistant chestnut species with all sorts of favourable  upsides, and details the Forestry Service's efforts to establish the Chinese chestnut in place of the American chestnut. Seventy years later, we're still talking about it. As in, it hasn't happened yet. Seventy years is a long time, and I am going to go right out on a limb and suggest that that is because it is not going to happen.

Somehow, in some way, we  have got the story wrong.  Chestnut blight is a real thing, a fungal species endemic to East Asia, which is why the Chinese chestnut is relatively resistant to it. American chestnut and the related Allegheny chinquapin, or dwarf chestnut, are particularly vulnerable to the blight,  and there really were heavy losses. I pulled up this abstract suggesting that mast production in post-blight Appalachian forests is down on average 28% from preblight production, and falls to as low as one-twentieth in some years, considerably reducing the forest's carrying capacity for some native species. That said, the chinquapin is anything but endangered, and neither is the European chestnut. In discussing surviving stands of American chestnut, Wikipedia perhaps inadvertently leaves the impression that there are a lot of them.  It is worth noting that in the initial stages of the blight, "salvage logging" often targeted healthy trees in stands along with blighted ones. While this impacted the American chestnut's ability to develop resistance, you have stop and ask yourself what is going on.

What's going on is that the American (and other) chestnuts are pests. "The American chestnut is not considered a particularly good patio shade tree because its droppings are prolific and a considerable nuisance. Catkins in the spring, spiny nut pods in the fall, and leaves in the early winter can all be a problem. These characteristics are more or less common to all shade trees, but perhaps not to the same degree as with the chestnut. The spiny seed pods are a particular nuisance when scattered over an area frequented by people." (Per Wikipedia.)

Having made the mistake of playing with my nephew under horse chestnuts in stocking feet on a number of occasions (I'm a slow learner), allow me to add an emphatic amen to this. Of course, horse chestnuts are one thing. They make a mess and hurt when you step on them. They don't attract poor people. Something tells me that the late Gilded age salvage logging of affected chestnut trees was very energetic, and not entirely motivated by the danger of falling, blight-killed branches.

Also, of course, the period was huge for ripping up twelve-foot-wide macadam roads with  narrow drains on either side and trees as the safety barrier behind. That sort of thing doesn't really work with automobiles.

The balance here is that mast trees also support livestock, but we don't have horses in our cities any more, and we don't drive cattle, pigs and horse-drawn wagons on the roads, either. Chestnut trees aren't disinterested patrons dispersing their largesse on needy mammals; they notoriously contain far more potassium, magnesium, nitrogen and phosphorus in their foliage than other shade trees. The agronomist naively values them for their fertilising powers, but those ions have to come from somewhere. Livestock also support mast trees.

So, anyway, I have a theory about why the chestnut tree was so vulnerable to blight at the turn of the Twentieth Century, and why there was such a holocaust of chestnut trees. Maybe it wasn't as big  a holocaust as they say, but it turns out to have been one of the classics, in that the perpetrators (that's us) have managed to get away with our crimes for a long time by blaming some Asian fungus.