A Techno-Cultural Appendix to July, 1947: Attack of the Mutants

Talking about a Legion of Super Heroes story of the 1960s with a particularly obvious homoerotic subtext, Chris Sims once commented on the point where subtext becomes so obvious that it is surtext. As we were reminded this week, what, in connection with hilariously naive comic books is a joke, had an earlier life as the Very Serious Artistic Movement known as Surrealism.

With surrealism in its death throes in the month that America's middlebrows were introduced to Existentialism as both Very Serious and Very Sexy --the month that the UFO became official, on top of that-- I am very tempted to say something incredibly insightful and pithy about the trends in French intellectual fashion that have washed over North American shores since 1947.
Read more »
Posted by Erik Lund at 1:41 PM No comments:

I'll be blowed if I can catch you up on everything that's happened 'round here. The ship turns out to have a cracked spar for sure, so I'm leaving for Hawaii tomorrow via Victoria, but that's the least of it.

Because who should blow into town last week but A., with the --I know I'm not supposed to give out clues that might blow our code, but I've found a character that won't give the game away if I call V.'s parents, the "Ns." All the "C.s" were getting too gosh-darn confusing! Their story is that they got a  yen to yacht up the Alaska Passage, so naturally they borrowed a boat off of your neighbour. I didn't see anything natural about it at all, and I was a might suspicious to find "W.B." aboard as the deckhand/captain. You may recall him as the lad that Uncle George blackmailed into taking their daughter off their hands, and he really doesn't seem to be the type to swan about Fort Rupert of all places. For the most part he was civil --actually, loads of fun. But when I saw him looking at some of the Chinese and Indian boys, I couldn't help but be glad that Tommy was gone, because I was already thinking something might come up that would remind him that he was Wong Lee's son, and then would all the plans that have been made on W. B.'s head be?

So it turned out to me and Mr. Brookstein who caught W. B. in a boatshed with one of the boys. To his credit, he didn't try to brazen it out, just disintegrated. Turned out Mr. Brookstein knew just the way to put him back together --which should have made me suspicious right there-- while I just followed his line in trying to get the kid somewhere reasonable. It's pretty tough, since neither of us have Cantonese that is what it might be, but in the end I sent him home with a promise not to tell his parents, to recommend him to our local agent, and $60 in his pocket.

Yes, yes, I do feel pretty low about that, like I've taken my first step down the road to being a brothel keeper, but I honestly couldn't see another way out of it. Then the other shoe dropped, when W. B. came to me that night and told me that Mr. Brookstein was blackmailing him to work for the Cominterm! I should have guessed from how hard the man works with the logger unions . . .

However, I'm not completely wet behind the ears, so Mr. Brookstein doesn't know that I know A., who, it turns out, arranged the whole trip to recruit W. B. for the American intelligence services! It turns out that they're practically farming out the Mexican office to Mr. N., on the grounds that he's rich and influential and has ties to Mexico and somewhat old money, the meatpacking houses being long forgotten. I'm not sure that's the best qualification for spying on Mexico, but this would make W.B. a potential triple agent (for us!), and I'm not going to quarrel. Another step down the road. . . Well, all of that meant that I had to find a way to buck him up, with all his talk about "God this," and "God that," and I ended up telling him that he'd have to work things out as between God and man for himself.

Which, because he's an idiot, came down to a screaming match with V., after she'd politely and gently dismantled some gibberish about  the native word for cow showing that some Indian tribes were actually Welsh, and thus Caucasian. At the end of it, he was yelling about how much he could tell her about "God and Man" at --his college, can I name it? Probably not. Think "locks," though. And she yelled at him that he should write a book, and he yelled back that maybe he would, and half of bloody Fort Rupert must have been listening in. Not that that's the first drunken fight they've heard from the pub, but V. and W.B. are a great deal more genteel than most.

You've notice that, in that long story, I've not said anything about the Ns. showing up out of nowhere --with A., yet, after I allowed in my letters that I was in the same county as V. You'll also notice that I started another page with the head of that paragraph. This time, no erasures that might be read by flipping the paper over! Yes, I'm encouraging you to read between the lines, and, no, I do not want this page sent on to Auntie Grace. I think our chances of keeping V. in Stanford are sinking pretty low by now already.


The era's right, but I'm going to give a modern performer some exposure. Ha. "Exposure."
Read more »
Posted by Erik Lund at 8:31 PM No comments:

Email ThisBlogThis!Share to TwitterShare to FacebookShare to Pinterest
Labels: No Radio News Because of Work Schedule Changes Again, Plantation of the Pacific, Postblogging, Seventy Years Ago More-or-Less Today, Trash Talk 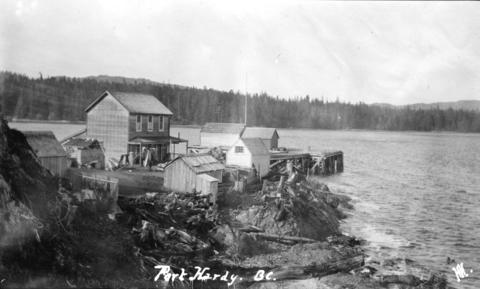 This is coming to you via George Wallace again, as I'm still stuck in Fort Rupert looking after my ship. Tommy and Jim left for San Francisco with the electronics in a seaplane from Coal Harbour on the weekend. I thought I was going to get an Air Policeman to stand guard, but now that the electronics are gone, the Chief says I should just hire an Indian to watch it, which I did. We did an x-ray of the wing, which was fun. .It was raining, and the aluminum is slippery. The film's going to be developed in California, at which point we'll know for sure whether the spar is broken. If it is, I have a feeling the Navy is just going to leave the old bird to rot. There's just not much on it that's worth salvaging.

Meanwhile, I got in some fishing last week. I'll be spending this week setting up recording gear at Winter Harbour (Newhitty) for Professor K.'s re-interviews.  The guy who did the original ones is dead, so K. has hired a research assistant and I've been helping her I've been helping out.

PS: Because of the channels this is going through, you'll be getting this before Auntie Grace for a change. I notice that some of my strikethroughs have soaked through to the backing page. Could you maybe paint them over before you send this on? I don't want to look all sloppy in front of Auntie. 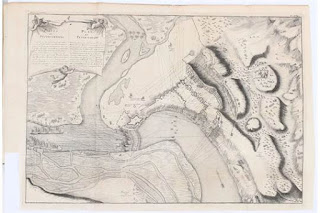 In 1681, a young gentleman of Bologna, Luigi Fernando, Count Marsigli (Imperial Free Counts are a dime a dozen in northern Italy) secured a place in the suite of the Venetian ambassador to the Ottoman Empire. Or, as you were allowed to say without a trace of irony back in the day, the Sublime Porte. The appointment did not last very long, for reasons having more to do with high politics than anything Marsigli did. (Given his biography, he probably did a lot of cruising, but he didn't get into trouble over his private life until he was, like, totally old and gross, so who cares?) In the course of looking for his next job, Marsigli happened to drop a remarkable manuscript on the desk of the then-Emperor (His Sacred Imperial Majesty Caesar, by the Grace of God, Elect Roman Emperor, King of the Germans, Archduke of Austria, etc, etc), Leopold I. It was the Stato Militare dell'Impero Ottomano, and although not the up-to-date, ripped-from-the-archives report on the Ottoman army that it purported to be, it was some first class espionage, and got Marsigli that job, and the rest was history. Weird, eccentric, overwrought history, but history.

But that's not what's important right now, because I'm talking about the report, which became a book: a profusely illustrated, magnificent volume, photostatically reproduced in the mid-70s as much for its beauty as the historical value of its contents. On the page reproduced above, text and graphics are combined by direct engraving on the copperplate by a master artisan, probably Dutch, in 1730. The reproduction is by the magic of Xerox, as mediated by digital camera work, transmitted through the Intertubes as an ASCII file, and so, from Windows 10 to Blogger to you.

That is printing then, printing now. It's amazing that printing images has gone from a high skilled job (engraving) to a low-skilled one (photocopying) and back to a high skilled one. (Coding. Although anyone can blunder along with the help of a high level blogging app.)

Maybe it's all magic? 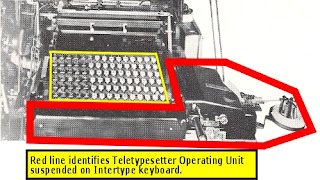 I feel very, very old to know that someone named "Hermione" is a postdoc at Utrecht with a very, very good University of Chicago Press book to her name. Dr. Giffard's Making Jet Engines in World War II isn't just an excellent treatment of the early days of jet production. It is also a meditation on the relationship between invention, development and production. In a neat little turn of phrase, she asks whether Allison's move to press forward with producing its own jet engine design might show that it is "Hard to do development without production," flipping what I would take to be still the controversial and out-there position that "It is hard to do production without development," that is, innovating-by-doing, on its head.

That said, I have a bit more on my plate here. Various Great Minds of the last age said that "God is dead," either hopefully or not, with the notion that it was time to prod the world into a post-Christian morality of some or another kind. Nietzsche and Beckett are my exemplars here, because Nietzsche's prophet is the overman, and who doesn't want to identify with an "overman," and because Waiting for Godot is so ludicrously appropriate.

Whatever you think of my potted literary criticism, at least it serves to frame my mad claim that technological innovation is dead.