"A democracy cannot exist as a permanent form of government. It can only exist until the majority discovers it can vote itself largess out of the public treasury. After that, the majority always votes for the candidate promising the most benefits with the result the democracy collapses because of the loose fiscal policy ensuing, always to be followed by a dictatorship, then a monarchy."
- Elmer T. Peterson.

In this week of so much going astray down south, the fact that the nominee for American Secretary of Labour has riffed on the idea that democracies are destroyed by social welfare benefits ("bread and circusses") might easily take a back seat to more pressing concerns about his boss.

But! I'll start with the attribution, which is a spanking new, modern thing for which we can thank Google, even if my store of gratitude to Google is being drawn down by the gradual disintegration of Google Books, although that's a rant for another day. Traditinally, we see this quote attributed to much more famous people than Elmer T. Peterson, and he himself began this tradition by attributing it to a  a minor Nineteenth Century thinker with a funny name. He did so in a 1951 letter to the editor published in a minor Oklahoman paper, which raises the question of how it entered the public record so quickly. Peterson himself was a writer, but his literary record [pdf] is pretty second rate, and it would be surprising if many people took him very seriously. "Alexander Fraser Tyttle," on the other hand, is someone to reckon with! I suppose.

Perhaps Peterson noticed the general shortage of actual examples of welfare payments destroying democracies. After all, he may have had the Juvenal "bread and circusses" line in mind, and perhaps even has some recollection of being rather brusquely informed that Juvenal came a full century after the Republic. Perhaps, although this is asking a lot of the basically optimistic mind of the early 1950s, which feared only communist roentgens,  someone even pointed out that rich tax evaders have a better record of destroying regimes than poor handout beneficiaries.

This is what makes the Roman example so handy, in that rich people might evade taxes and even attend gladiatorial games, but they certainly do not stand in bread lines. Not that Peterson needed to explore things very deeply. Everyone knows that the ancient Romans gave out a corn dole to the urban poor of Rome.

Someone had to go and make Rimmer an admiral, didn't they?

Unlike apparently every other person on Earth, I've really got no problem with the Empire building one death star after another, and getting them blown up, one after another. It's a dysfunctional regime, guys. That's what dysfunctional regimes do. If you need an explanation, just borrow a cynical line about someone's interest/income, whatever. If the Dark Side is all about evil and genocide, then regimes dominated by the Dark Side are going to be impervious to the idea that genocide is bad policy. Dark Siders like doing genocide: Rationalisation to follow.

The Third Reich wasn't dominated by Sith lords because Sith lords don't exist. So what's going on? The leadership's dysfunction is easily explained. They were the usual lot of over-promoted narcissists. The two questions are: how did people like that achieve power; and; Why genocide? The answer is that the Nazis promised to do stuff for people that other parties wouldn't. Weimar struggled for years over (agricultural) land reform because big owners and small had divergent interests. The Nazis promised to give both big and small what they wanted --and a pony! This is a trick that narcissists can do, because they don't give a shit about anything but postive reinforcement right now now now now. Since the big farmers largely wanted their  old Polish estates back, the outlines of policy were clear enough. The problem was not having stuff that belonged to foreigners, so the solution was taking stuff from foreigners. What would happen to the foreigners? They would, like all the other "useless mouths" and whatever other pejorative label we like today, just go away. (They're crude and nasty and backwards, so it's practically a good deed to shoot them in the back of the head. Am I being subtle enough here?)

There. No more subtle.

So, no Sith, but, nevertheless, a policy of genocide. I doubt that my summary of an argument about the roots of Nazi genocidal policy is going to sound anything more than glib and unconvincing tot he vast number of scholars who investigate these questions, so take my contribution for what it is worth. Where I can possibly push forward is by  asking how evil as strategy worked out. Not very well, is the well-known answer, but there's some interesting details in the corners of the situation.

Against Mass Production in Post-Modernity: A Tractable Problem

There was a thing on Twitter, the other day to the effect that the Allies won World War II because Britain provided the time; the Soviet Union, the blood; and America, the treasure. I don't disagree, but I've been looking at various things of late. One is the shambles of the postwar British economy; the other, the M4 Sherman tank. The latter has treated me to a strong dose of the idea of American mass production. And while the M4 is a piss poor standard bearer for this argument given the collapse of production rates in 1944 after the completion of the capacity build out [pdf], the other corollary to the idea that mass production is that the Allies defeated better German tanks with human wave tactics, and, well, that's acceptable. And yet. It might be supposed that the Allies had an opportunity to end WWII in the fall of 1944 instead of the spring of 1945 by closing down the Normandy campaign with an even more complete victory than they, in fact, achieved. The larger consequences might or might not follow, but substitute a sufficiently good tank for the Shermans actually used in operations TOTALISE and TRACTABLE , and the larger operational victory was certainly in reach. Even in the final days of chaotic fighting around the Polish blocking positions outside of Falaise, a better tank might have made a difference. I've suggested before that Britain's last wartime cruiser tank, the Comet, would have made the decisive difference. But it seems at leasst worth arguing that the older Cromwell which would have replaced the Shermans of August in the absence of the 1943 production agreement would have sufficed.  "Good enough" is NOT good enough.

As for the larger consequences, the official historians seem to think that ending the war a few months earlier would have had a salutary effect on the British economy. It would certainly have saved a great many lives. Is there a lesson about mass production here? Sure. Why not? It'll do for a subject this week, but I want to motivate this post a little more, so I'll briefly talk about counterfactuals, and the last stand of the BCRs, often written about in that way that demonstrates that historians do counterfactuals even when they think they don't.

Why would historians do counterfactuals? Because we do them all the time. At the end of OPERATION TOTALISE, a battlegroup consisting of an armoured regiment and mechanised infantry battalion, under the command of the BCRs' Lt. Col. Donald Worthington ended up stranded, deep in the German position, where it was destroyed during the daylight hours of 8 August 1944. The official history says that Worthington made an indefensible error of navigation on the difficult night march towards his actual objective, ending up six km away. He compounded this initial mistake by failing to acknowledge it, depriving his command of reinforcement and artillery support. This versin of events ought to motivate Vancouerites quite strongly, since Colonel Worthington was a scion of Vancouver elites (who lived two blocks from me), and the British Columbia Regiment is one of the city's two militia regiments. That disastrous last stand cost this city, and ought to have been a matter for the ballot box. See? There is a reason for counterfactuals! They tell us not to vote for the NPA.  (Not actually a disendorsement.)

There is, however, another version, in which Worthington was a gallant beau sabreur, who made an understandable mistake that ended with his command being in an excellent, if unforeseen position, from which, better supported, he could have led 2nd Canadian Corps to the closing of the Falaise Gap. Exactly why this support was not forthcoming is not clear, but David Bechtold very strongly implies that circumstantial evidence points up the chain of command.  then we need to look to higher headquarters, and have at the sacred cows of the Canadian army.

Whatever be the case, there is an interesting technical question here. I know, I know. No-one wants to hear some git prattling on about how, if the RAF had developed the Windsor, Whirlwind and Henley instead of the Halifax, Typhoon and Battle, Britain could have won World War II more! But when we can frame it as "Cromwells instead of Shermans SAVE THE WORLD," then the argument is motivated. (Becaue it's a critique of narrative tropes of mass production, you see.) If Worthington had better tanks, then TOTALISE might have accomplished what TRACTABLE set out to do. (Or, on the other hand, if all of 1st Polish had Cromwells, and not just the armoured reconnaissance regiment.) I'm narrowing donw the claim. Just the Cromwell, so close, in so many ways, to the M4.

An Agro-Technical Appendix, IV: It's Always And Will Forever Be 1846

Of course not. No-one's ever read a history of the Thirty Years War past the death of Wallenstein, and even that was a struggle. That's the part where you skip the last, thick chunk of pages. It's amazing that anyone ever even managed to write those pages, and I am not going to absolutely guarantee that they're not blank. No-one knows the end of the Thirty Years War. Or the Hundred Years War, or the Italian Wars, for that matter. The last history of that last that I've tried to tackle starts out with exactly that observation, wondering who would still be with him in 1557. (Not I, as it turns out, although I really liked the bits I read. Only $46 for the Kindle edition!)

This is why, in British economic history, it is always and will forever be 1846. Famine in Ireland! Corn Law repeal! Peel splitting the Conservative Party! Chartism! Something something Second Reform Bill, and, in the midst of it all, the disgraceful capitulation to America over the Oregion Boundary.

Not that I'm bitter or anything.

The siege of St. Omer is a pretty good example of this, actually. The linked Wiki article seems to have been written out of an old Spanish account, and has mind-numbing detail of the difficulties that late Thirty-Years-War armies had in mastering the complex systems of canalisation and reclamation with which local authorities had tamed the surrounding marshlands into irrigated farmland and convertible water meadows. We can see how agricultural investment is transforming the landscape and dragging military practice along with it. Then, all this was forgotten in pieties about "Cabinet War" and the more recent "OMG they make fortresses shaped like stars, help Po-Mo Man you're our only hope." Farms and fortresses; it would make a good study.

Farming! That's what I'm talking about! 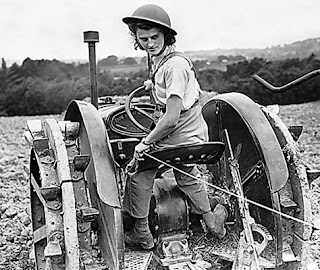 Writing about Lord Woolton's war requires pictures of Land Army girls driving tractors, so here you are. You'll notice that this is a caterpillar tractor (small "c" caterpillar), of which we haven't heard much so far in this series, since they tend to be big and expensive for modern collectors and their websites. Also, per David Perren, British agriculture just wasn't that into caterpillar tractors, on account of the soft-bottomed land being under permanent grass.