The Early Iron Age Revival of the State, VII: Briquetage

This is your top-of-the-page reminder that this "Sacred Spring" series started with a Technical Appendix about a new glycerine recovery boiler for soapmaking plant. The salient point being that soda, lye and potash are made from wood ashes and salt, and are, along with lime, the classic basic reagents of pre-modern chemical engineering. Because traditional language hates you, "soda" and "lye" are commonly called by each other's names. (Washing) soda is sodium carbonate (mostly Na2CO3, although natron is Na2CO3-10H2O). (Baking) soda is sodium bicarbonate (NaHCO3). (Caustic) soda is NaOH. Clear as glass, I hope.

The basic argument (get it?) is that new technologies of timber removal --that would be your iron axe-- are linked to a new agro-industrial base built up around charcoal production. This much being an established point, the realisation that charcoal production also bears on soap and glassmaking is the point being explored here. I'm not going to push on with silver refining for now, because that stuff's just too weird.

So, what about this new agro-industrial base? Well, it can serve as a weak lead-in to a quote from Niall Sharples, recently appearing in this series as the careful, thoughtful and assiduous excavator of Maiden Castle: "[The technological change from bronze to iron] coincides with, and, indeed, is connected to, a major transformation of society. The principal archaeological change at this time is the transformation from a dispersed society of individual houses, scattered across a landscape of fields, to large densely occupied permanent settlements that are contained by substantial boundaries --hillforts."

My engagement with Sharples' enticingly titled Social Relations in Later Prehistory: Wessex in the First Millennium BC" is ongoing. That's how I say, "I'm still reading it," and manage to look at myself in the mirror. As I dive deeper, I am bearing in mind a noticeable tendency for recent writers on British Iron Age prehistory to namecheck "heterarchy,"a concept I first encountered in Byers' account of Cahokia, in which the prototype American city appears as a spiritual "shopping mall" of competing offers in the fields of cosmology, cosmogony, theogony and other pompous-sounding Grecisms. (Or, as I would prefer, a North American college campus, not that it is always easy to tell one of those from a mall, these days.) If Cahokia is a model for later towns from Kaskaskia down to Prophetstown, which we have accounts in the Jesuit Relations and elsewhere, a heterarchical town would also have offered a range of tribal and linguistic identities to choose from.

Is it at all permissible to compare Maiden Castle with Cahokia? Maybe, maybe not. The walls are a bit of an issue, for one.  And is "revival of the state," too bold? (Even after distancing the argument from its origins by moving to an area where the "state" is a pristine creation and arguing by analogy back to the centre, or at least to Golasecca.) I could also ask whether this new agro-industrial base flow from the revival of the state, or leads to it, but it looks as though Sharples is going to engage with the question, and I look forward to see where he goes with that.


For now, I'm going to explore what this blog has to offer about the relationship between technological and population change, with a laser-like focus on grazing land might shed some light on. So, just to be clear, it's about turning grazing land over to industrial production of fats, hide and wool and to production for export, which frees the pastoral base from its implicit, "primitive" base of subsistence --although salt production very definitely comes back to us, there.


There are better renditions of Jerusalem on the web, but the Flying Circus crowd are amazingly good.

The idea here is that capital cuts in service of the Labour Government's pursuit of the New Jerusalem in the 1940s led to bad motorcycles in the 1970s. That is, to the collapse of the British motorcycle industry, and, more specifically, the bankruptcy of BSA in November of 1972.

Well, okay, that's the vulgar read, which I would attribute to Correlli Barnett if I could be bothered to read Lost Victory and find out whether he is even aware of the 1947 capital cuts. For now, I'm going to satisfy myself with David Edgerton's review in the London Review of Books, which is pretty boss, and the fact that Barnett showed up in the comments to whine is priceless. That David allows the concession that the Brits could have reduced their calorie intake to German levels to squeeze out some more capital also allows me to go on for a bit about food and health at the bottom of this post.

I probably shouldn't be promising more on food and health than I can deliver. My hunch is that there is a huge issue here, but what I've got right now is a silly and tendentious man on RT. As for whether the 1947 capital cuts had any real effect, much less knocking on to the failure of BSA and Norton Villiers Triumph in the mid-70s, it all turns out a bit anticlimactic.  Non-vulgar economic historians don't think that the cuts even happened.Since this is an appendix to a postblogging entry, and not a definitive statement about the effects of these capital cuts, I am going to feel out the extent to which it is possible to push back against that consensus.


I apologise if this is the last you ever hear of me, but I really feel like I am pushing  my luck with my fourth December air crossing of the Atlantic. You have done the best you could for me, booking me on Speedbird, but I am now up to three flights diverted to Prestwick. (Technically, my third flight isn't diverted, but the BOAC agent strongly advised me to catch it at Prestwick.) Hurrah for December train rides through the North of England! I'm told that it is much warmer this winter, but you wouldn't know it from the way they heat the cars!

All the tedious explanation is in way of saying that I am dropping this package off with a courier at Prestwick, so that you will have to wait to the next installment to hear of my ever-so exciting adventures in America. The reason for that is that the Earl wants to know what is going on with our new partners.

Here's the story. They want our money, so that they can break with Odeon, but you knew that. I guess they knew that they had no chance of that, so they decided to blackmail us. Make no mistake it really was blackmail. It's not just the calculated offence of making a movie out of President Fu Manchu. I don't know if you've read the book (God knows I haven't), but apparently it was a political thriller, "ripped from the headlines," and the script placed before me was an update. I don't know who is riding herd on Mr. R. these days, but the entire "scenario" was rewritten. A stand-in for Mr. Walllace replaces the disguised version of Huey Long in the original, and the "Devil Doctor's" preferred candidate is --A secret Eurasian from a San Francisco shipping family.  It really could not be more obvious. I leave any sending of messages to the menfolk. For my part, I read enough film magazines to burst their balloon easily enough. Once they admitted that they were still casting (Basil Rathbone? Seriously!), it was obvious that it was all hot air. They'd never have it ready for American release before the election.

Things might have ended in an impasse there, but your friend was most helpful with the details of Odeon Group finances, and when I placed them on the table, our partners had to admit that they were in no danger of losing their sad little business making movies out of horrible radio dramas. I almost regret telling them that they couldn't make a "Fu Manchu" movie. They really do need better material.

Though I am sure that this is not why we arranged for them to have the rights.  Nor did they impress me very much as business partners; but they do not have to, because they can go on with their affairs without our money.

So there you go. You can tell my Mother, if she asks, that I have been a good little trooper, and that I was in far too much of a  hurry for a stop in Chicago.

The Caribbean theme is developed, a bit, below.

It seems to be a habit for me to open these letters with a "Thank you," as you are so infallibly good to me, and I can only wonder why. The brochures and applications are most interesting. Except for the one for the University of Chicago Law School, which seems to be someone's idea of a bad joke. I feel a little faint to be told that if I genuinely want to go to law school in 1949, I should be starting to make my plans now! It seemed so much safer and less frightening when it was just a lark and a dream!

Not a lark, and not a dream, is the fact that I am over the North Atlantic right now, just out of Idlewild and headed for Gander. I have a seatmate, after all, because of the DC-6 grounding, but I have firmly insisted on enough space for notes, writing paper, and cypher book. My seatmate is sleeping off what smells like more than a few brandies too many, so I don't need to explain anything to him, at least until we are well past the point of no return. I am hoping to be done by then, as while this project tends to drag on every week, I have used my train time to do something never seen before in these letters. I've read my magazines in advance, and know what the stories are about! That wahy, I don't have to read with one eye and write with the other, and revise halfway through when I realise that I don't know what the story is about.

We'll see if that saves any time! Not this time, but next, there'll be another deviation from past practice, as I follow The Economist through to the end of the month, for the simple reason that it doesn't get around to explaining l'Affaire Odeon until Christmas week, and future generations reading these letters won't otherwise have a clue as to why I am making this flight.

Okay, sure, if they have any sense, they'll probably guess why my Mother is making me make this flight (and agree with me that she's off her rocker); but they won't know the business story. Which is fair enough, as I hardly know the business story. Didn't we just buy an interest in that studio as a way of getting into the silver smuggling craze? Now that the financial authorities have cracked down on that business, can't we just cut them loose? Surely it can't be financially complicated, or no-one would think that I was the person who needed to be sent over!

Grr. Have I mentioned, Grr? 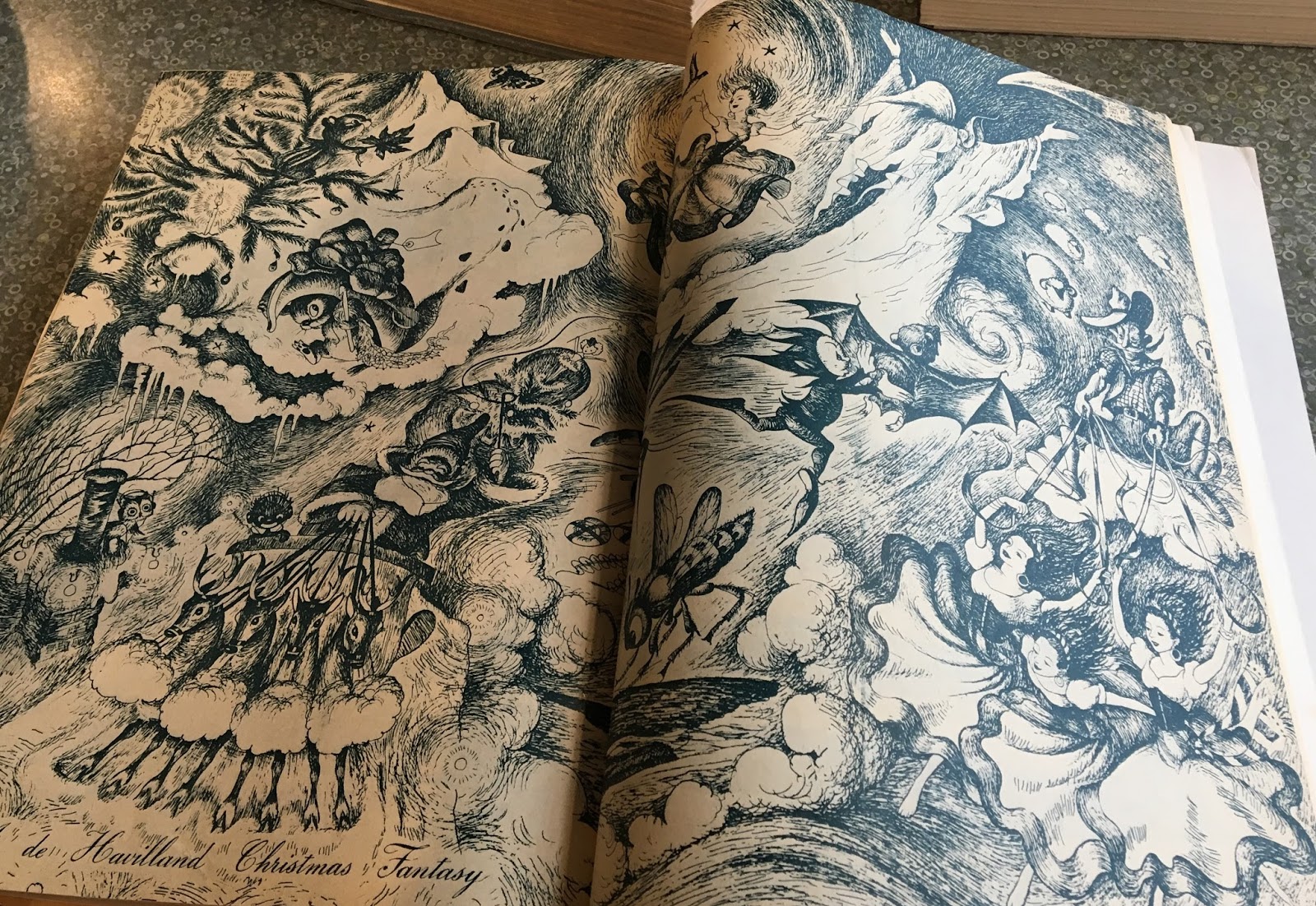