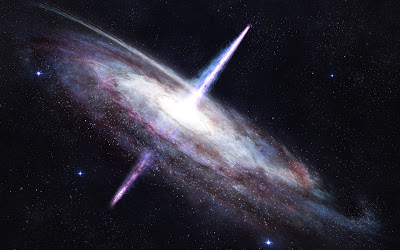 I was not quite 19 when Ronald Reagan made his "Star Wars" speech on 23 March 1983, perfectly prepared by far too much libertarian science fiction to be convinced by his case that it was about time that scientists stopped working on MAD and started working on ABM, on defending civilisation against the atomic horror instead of exacerbating it.  In its immediate wake, the argument against "Star Wars" that got the most attention, seemed ludicrously pessimistic. Computer scientists emerged to argue that it was just too hard to programme ABM guidance  software. 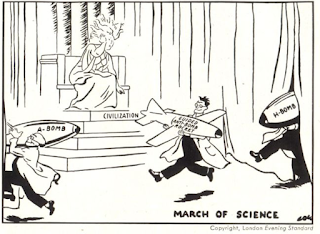 It turns out, as we saw in February, that ABM wasn't something that people just thought of in 1983 after seeing Star Wars IV. The first ABM proposal was put on the table before WWII even ended, and involved shooting down V2s with antiaircraft guns. This week, it turns out that ABM efforts are intimately tied to the H-bomb debate. If the Communists are going to shoot down a large proportion of the atomic bombs aimed at them, the ones that get through should be corkers, and also much cheaper.

This is why, as January comes to an end, President Truman is hearing conflicting advice from his experts. Some believe, correctly as it turns out, that the H-bomb will be significantly cheaper, in bangs for the buck, than atom bombs. This argument does not, however, get anywhere near as public play as the "corker" argument. It is, admittedly, in part because the arguments are related. if only one in ten weapons get through, better that Moscow be targeted with 10 H-bombs, so that one can level it, than with 100 atom bombs, etc.

For the scientists that object to this second argument, it was mostly to the grotesque barbarism of aiming to hit "Moscow" with a 10 megaton bomb, in order to destroy all Moscow-related strategic targets, but  also, of course, well, Moscow. The fact that, in the background, there are some goulish rumblings about bombs of unlimited yield --the gigaton bomb-- underlines this. But there's a reason that Edward Teller is talking about a gigaton bomb that, it seems to me, gets obscured in the rearview mirror. Nuclear physicists had a lot to learn about atomic physics in 1950.

The January 1950 argument flows from the fact that Teller is still arguing for his "classical super" H-bomb. Others believe that the classical super is highly problematic. We have two accounts. One is that the difficulty is economic and industrial. There is not enough tritium for the classical super. The other is that the classical super is seen as physically impossible. It is here that we have to ask ourselves how so many physicists are ranging themselves against one of the greatest theoretical physicists of the day. The usual explanation is that Teller was a colossal, raging asshole. And this is true! Moreover, he is quite likely being driven by all kinds of motivated reasoning. But that doesn't mean that he can't defend the classical super, however weak his argument actually is! So what is going on, in January of 1950, months before the Teller-Ulam design surfaces?  This is a very interesting question, because it invites us to peer through telescopes and into cloud chambers with Bit Science, and investigate the way that "pure science" is wrapped up with big booms.
Read more »
Posted by Erik Lund at 5:48 PM No comments:


As I'm stationed at the edge of the world, no gossip this time round! Except, well, you may not have heard that Sarah has come down with diphtheria just at the end of the incubation period, extending Ronnie's quarantine.  It's still a bit uncertain what's going to happen to her magazines. The books will be saved, but the magazines are cheap enough to burn? Doesn't seem like the way to stop a plague ot me, but what do I know?

The mood here in Formosa is febrile, with all eyes on Hainan Island. The crossing to Hainan is much less of a challenge to the Communists than the Strait of Formosa, but, in the end, the outcome of the fight would seem to come down more to defections on the Koumintang side than the strength of the Communists, which has everyone eyeing everyone else suspiciously. I find that my Mandarin has more of a Hakka lilt than I ever expected, which gives me a bit of an in with the old revolutionary crowd. I try to be discrete, given that a follower of Dr. Sun might turn out to be a followed of the Soongs. But the point is, I'm hearing more rumours and gossip than  you'd believe. Basically, everyone is talking to the Reds --according to everyone else.

I'm almost tempted to list everyone I've heard denounced. That way, when the Communists come, I'll be able to say, "I told you so," no matter whose sector they land in. 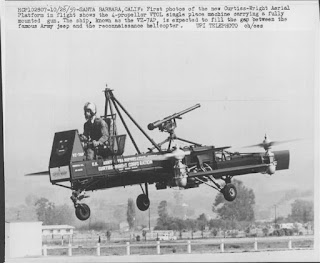 (In honour of True magazine, some old time science fiction.)


I bet you were wondering who this letter would come from this month, what with Uncle George saying "no," Auntie Grace and James in Singapore, Ronnie in quarantine because of Susan's diptheria, and me waiting on orders.

Well, it's me. I was hoping that this would be coming to you from Tampa, and I could tell you about what it's like flying straight into a  Florida rain squall with the most giant radar the combined Navy and Air Force could dig up blasting into the thick of it to see what comes back. But, I'm not. I'm in the backwoods of Formosa, "advising" the Koumintang Air Force on the delicate subject of Stop Doing What You're Doing And Do Something Else Instead. I can't say very much about that, apart from the obvious, which is that the Communists are using Russian equipment, and don't seem to be doing it well, so maybe we'll go some way towards cracking their communications, which will be helpful for finding the B-29skis before they blow up Seattle (which would be bad, and we're against it even though it'll help Wichita pick up some contracts, which would make the President happy).

On the "bright" side, this is the back end of God's creation, and all of Ronnie's mail is being burned, because the Post Office doesn't know how to fumigate diptheria germs and quarantine is quarantine.   So all I've got for this project is the post's subscription to Aviation Week, Time, and (for some reason) The Engineer.  Or, well, I would, but some horse's rear end cleared out all this issues since 1930 and diverted the new subscription to an office in Taipei three months ago, and so much for that. (The post still gets to pay for them, though, so not all is lost! Or, no, wait, that means even more is lost.)

Onward and ever upwards! 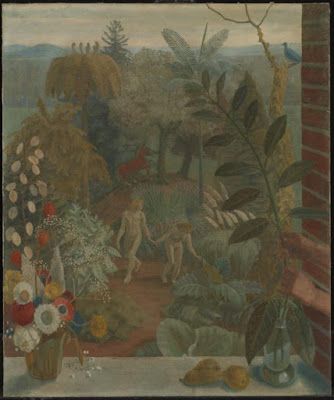 The Bishop's Sea: The Hawk of the Atlantic

A bit of an exercise in dilettantism here, but worth it because this stuff does seem to be neglected in the historiography of the "Reconnaissance." 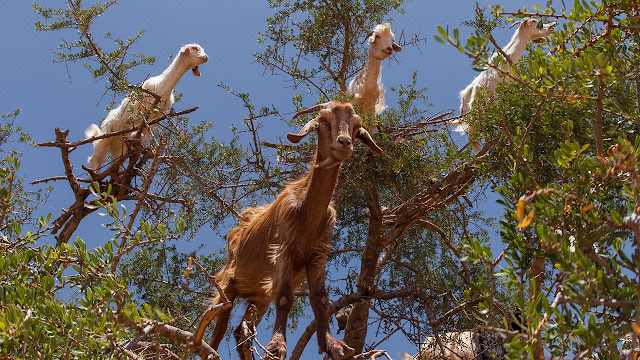 Some 4000 meters above sea level in the High Atlas are the springs of the Oued Sous, which falls into the Atlantic near Agadir after only a 112 mile run. The Sous is well known as the home of the Argan tree, something of a sensation in the cutthroat world of hair products for the last few years.

It was in this fertile and well-irrigated region, in the otherwise unidentified village of Igiliz, a bit more than 500km south of Casablanca, that, perhaps in 1080, Abu Abd Allah Muhammad ibn Tumart was born, in the nation of the Hargha, part of the Masmuda Confederation. His given name is something of a mystery, for he is known to history as the "Son of Delight," perhaps from his father's nickname, although  numerous Sufi saints of Morocco bear the same name.

Perhaps unlike them, Ibn Tumart climbed towards the wisdom of God, like a goat  after an argan nut, travelling first to Cordoba in al-Andalus, and later to Baghdad, in search of Islamic learning. Which he found, it is said, at the feet of al-Ghazali. (The hagiographers really aren't that helpful.)


Be that as it may, Ibn Tumart returned to the Maghreb by ship from Alexandria in 117/18. At Igiliz, at the end of Ramadan in 1121, he preached a fiery sermon in which he pursued weighty theological issues as well as the gravely immoral Almorad practice of veiling men and unveiling women, something with reverberations for our modern, masking times. Properly wound up, he proclaimed himself the right-guided one, the Mahdi, which implied levying revolt against the Almoravid regime. Promptly decamping to the high fortress of Timmel, in the midst of the Masmuda country. His cause united six nations of the Masmuda, closing the passes from Marrakesh into the Sous anticline.

The anticline between the High Atlas and Anti-Atlas contains not only the watersheds of the Sous, but of the Draa valley, which rises only a little to the east of the Sous, but runs at first east and then south to reach the Atlantic below Tagounite, falling into the Atlantic north of Tan-Tan, marking the former border between Morocco and the Spanish Sahara in its lower course.  At its westward bend, far inland, lies the tell identified as old Sijilmasa, and, near it, the spectacular hillfort of Jebel Mudawwar now a regular movie location.

At this time, Sijilmasa was the major northwestern terminus of the caravan trail from Ghana, and also a way station on the east-west route to southern Morocco from Tunis via Tlemcen. Although drawing itself apart from Almoravid power, it was a crucial waypoint on the trans-Saharan route to the Empire of Ghana and its gold, and the blockade was an existential threat to the Almoravids, although before the economic effects could be felt, ibn Tumart had led his tribesmen down to besiege Marrakesh and been ignominiously killed. It therefore fell to
an Algerian named Abd al Mu-min to become the actual first Almohad caliph after extinguishing the Almoravid regime under its last leader, Reverter, Count of Barcelona, father of  Berenguer of Barcelona and of Abu-l-Hasan Ali ibn Ruburtayr. Abd al Mu-min would ultimately rule from the Guadalquivir to Cyrenaica, but he died while building a city at Agadir and an arsenal at Rabat, and so did not live to see his seapower roll back Christian conquests in the Atlantic.

Which is my point. The timing and context of the founding of Agadir, a Moroccan porty city that lies far to the south of anywhere I would had imagined.

If you were wondering. Well, that, and I had the Almohads confused with the Almoravids.