(Since this happened seven years ago, somehow, a link.)

I was thinking about doing an appendix on the vocoder, which turns out to be a very important technology, but that would be hard, and blind landings and runway lighting are  considerably more pressing. I usually date electronica's invasion of popular music to the Beach Boys, and while I'm sure I'll turn out to be completely wrong about that, it sure hasn't happened by 1948!

So that's the original California Gurl covering Rebecca Black's ironically-enjoyed autotune hit from 2011 as a way of seguing to Arcata, California, the home of the American blind landing. More or less.

Well! Don't let me tell you that I am not cross with you! Instead of being off in the Lincoln to Arcata, I am sitting here in a rented Cadillac, Wong Lee keeping me safe, waiting for Fat Chow to escort Grace out of the terminal. Don't get me wrong! I'm glad to have Grace and James home and safe! My heart was in my mouth for the entire time they were in Hong Kong. I guess I should admit that I was wrong about Mssrs. Wu and Kwan. Now if only we can make good on the bullion.

I left myself some space so I could finish this letter, which, as you know, did not get off until we had seen James and Grace off to Santa Clara the next afternoon. That left me time to talk to Reggie on the phone. Except for a bit of heat over politics, I'll draw a veil over that, except to say that he is full of enthusiasm for the latest British developments in blind landing, and can't wait to pester his CO about it. I don't suppose it is news that he thinks that Arcata is wasting its time fiddling with lamps when it could be fiddling with cockpit radar --even if he admits that he can't figure out a way of using it.

Bill and David stopped by the apartment immediately that Miss K. left to be with her beau, so that I could pass on your package. I was very carefully not curious at all, although I couldn't help noticing that there is a story in Engineering about the little gadget I carried from London in my luggage. I have a feeling that it doesn't explain what makes it so important to Bill and David!

Also, received yours of last week, no longer cross. Thank you!  No just don't read this letter, change your mind, and send my application in to Hastings College, instead. (Sorry, joke. All will be understood if you read every word to the end, but since when do you do that?) 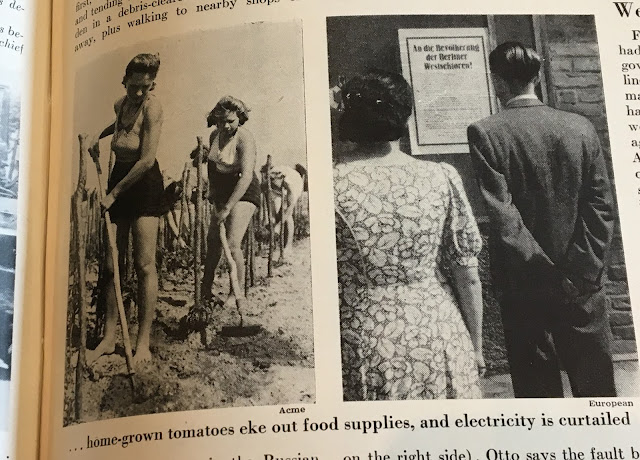 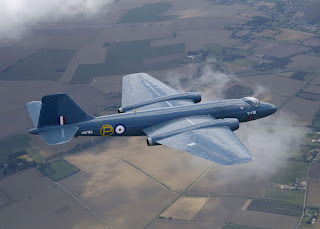 Since the Canberra had a somewhat late and troubled service entry, a model narrative has Britain "broke," and the United States paying for it, because the Cold War might get hot, in which case the RAF would have to do its part in stopping the Soviet steamroller from reaching the Channel in 48 hours, or whatever.
Read more »
Posted by Erik Lund at 1:54 PM No comments:

Surprise! Here's the letter I told you that I'd never be able to write in between flying across the Atlantic and buying fall fashion by the gross. (Hope you don't mind the absence of Aviation. I hope that there's enough science, or possibly "science" in Fortune to more than make up for it! On the  other hand, I didn't have the time to find out that I didn't know the name of the President of the New York Stock Exchange, so "Oops" on that one.

You'll have heard from Reggie, so no need to go on for hours about the Berlin Blockade and the airlift. Reggie is not going to be flying in, as it has been decided that he is needed in Arcata. He'll be leaving his ship and escorting  his radar home to be installed in a less strategically vital hack. Bill and David are quite excited about flying over to Germany to do the job. I hope they don't mind "doing the "potato salad" a bit. (That's a joke.)

On the bright side, being just back from Europe gives me a certain cachet. I just wish I'd stopped in Paris, and not Wiesbaden and Frankfurt! Thank you for your package, by the way. Exquisitely chosen, and I can put on an "airplane set" look, even if I had precisely no time to shop.

Uncle George is very intrigued by your suggestion that, if a movie studio works in London, it might also work in Hong Kong. He is even talking about going out himself, which would be very good for him! (I'm worried that he is drinking too much.)

P.S. Please no atomic wars until Reggie has had a chance to see me in the red number. 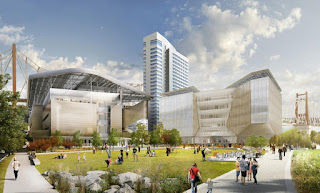 This building, if erected, on Cornell University's New York City campus, will be the largest passive building in the world. It's hard to argue with the ambition, but, at the same time, I'm reminded of Adam (T.) Smith's impossibly pompous but profound observations about the "political landscape" created by public architecture. This structure won't be in the world, so much as making a new one, by intent.

The comparison I am aiming for is with that most famous of ancient urban sanctuaries, the Parthenon, a temple to the goddess Athena, likely in her role as patron of virgins and maidens. The inevitable comparison with the Vestal Virgins in Rome would then link it to the city's symbolic hearth, while Joan Breton Connolly proposes an association with a mythic virgin sacrifice that links Athens' patron goddess and democratic ideology to a narrative of female empowerment. There's also plenty of room for it to be about the women's work of textile production.

Urban sanctuaries are the social context of the title, while the four key innovations are iron, alphabetic writing, equestrianship and money. All these innovations of the Iron Age are clearly significant, just on the basis of what ancient writers said, and sometimes did, with them. The modern approach that takes archaeology before text seems to undermine and complicate the received, literary narrative. And since no historical effort can avoid its contemporary context, one may wonder about the ideological motivation that might have led elite literary practitioners to constructively misunderstand the foundations of the world they lived in --to invert transcendental and substructural concerns and reverse causality, as some mad-eyed ideologue would put it.

This may ask too much of the interpretative power of archaeology. Or it may not! In the interest of dealing with Haselgrove and Wigg-Wolf's 2000 colloqium on "Iron Age Coinage and Ritual Practices;" the published version of Alexander Mazarakis Ainian's thesis, From Rulers' Dwellings to Temples; another colloqium,ill digested, Santuari mediterranei tra Oriente e Occidente; Jorrit Kelder's The Kingdom of Mycenae; Bakker, Maurer, Pischke and Rauch on "Trade and Growth in the Iron Age;" and, still hanging about the apartment and perhaps somewhat old-fashioned by comparison with the other work, D. W. Harding's Iron Age Hillforts. Some other work is going to get mentioned below. As I type, I notice a certain paucity of writing about writing. As I try to reconstruct how it fits in here, I turn to Kelder, who is, of course, interested in what came before the Iron Age. Still, there's an interesting point to be made. I hope. (tl;dr: The urban sanctuary, with its sacred boundaries, might be necessary for the emergence of these technologies.)