The Early Iron Age Revival of the State, XII: The Queen of May

Most publicity shots from Duel in the Sun feature Jane Russell's boobs against a backdrop of hay. Jennifer Jones is this blog's Queen of May for 2018. (Thanks to all the gals who came out: Also, if it comes up, the blog's choice is distinct from the author's.) 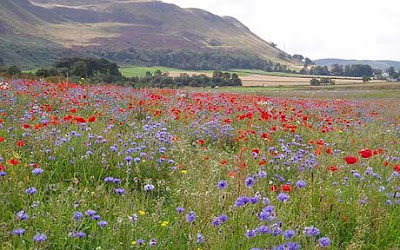 And this image of a British wildflower meadow is cheerfully scraped from a "How to" article in the Daily Telegraph explaining how to go about creating your own wildflower meadow on a few hectares of your land for which you can't think of any other use. But setting my clumsy attempt to start class warfare aside (we're all in this together, you know!), let's just stop and meditate on spring and flowers and fertility and the mysterious way in which they're connected, deep in the human psyche.

Done? Enough meditation! What about scythes? 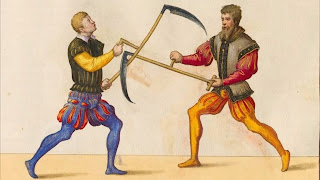 as it turns out that haymowing re-enactors are seriously a thing these days. The idea of dueling with scythes isn't completely preposterous, given that the fifty-centimeter-plus long scythe is the second largest Iron Age toolblade after the sword, and your typical scythe saw fan order of magnitude more use during its lifetime than your typical sword. That quietly and unobtrusively puts it in position to claim the title of apex technology for hand blacksmithing, which makes it all the more remarkable that its history is so obscure. I do have some results to report, or I would be talking about my recent correspondence with Dietrich Eckhardt, but I want to be brief, since, in pursuing the subject, I was sidetracked into buying Manning's "major new history of economic life in the Mediterranean in the Iron Age," and Marc van de Mierop's Philosophy before Greece, and may eventually have something to report. 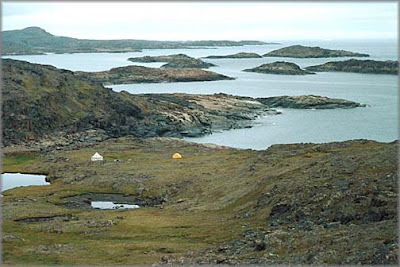 The Nanook, or Tanfield Valley, site, has appeared in these pages before. Lying along the southeastern coast of Baffin Island, it is a fairly prominent site of prehistoric settlement. Michigan anthropologist Moreau Maxwell excavated here from the 1960s to the 1980s, apparently informed of ancient relics by a local informant.

As for "Nanook" itself, I'm reminded of Henry Collins' excited description of the Sadlermiut site, published in a 1954 National Geographic, and inspiring generations of speculation that appear to end, sadly, in concluding that there is no there, there. I'm obviously very impressed by the fact that the population of the high Arctic did not exceed 5000 people at any point in prehistory, because I repeated it twice in two paragraphs in my last "Nanook" post. It remains, I think a fair point that any site with eighty house ruins, several hundred graves, and hundreds of meat caches is going to bulk very, very large in the human story of the high Arctic. Something significant happened here. The  disappointing thing about Sadlermiut is that it happened too recently to be romantic. Nanook is another matter.

Unfortunately, it is not similar to Sadlermiut in having numerous ruins. The far southwest of Baffin Island is resource-rich, for the High Arctic, and had a high prehistoric population, and within the region, the Tansfield Valley stands out  as what pioneering investigator, Moreau Maxwell, called an oasis. Although tending to damp in the summer, it is an obvious camp ground. The problem was the lack of obvious ruins, although that can be explained by the absence of good building stone, and alternatives such as ivory, sea mammal bone, and caribou antlers, all unavailable for various reasons. Instead, Moreau concluded, structures in the area would be cut from sod, a scarce resource in the area, in general, but copiously available here.

Maxwell's excavations justified the hypothesis. In particular,  he was struck by ruins that could be interpreted as the foundation walls of a (Norse-style) sod longhouse, although many other explanations have been put forward. Along with the exciting discovery of muskoxen fur, analogous to the bison, muskox and brown bear hair found at the famed "Farm Beneath the Sands," the prospect beckoned of larger exchange networks uniting the farthest northern reaches of the High Arctic with the Canadian boreal forests, and perhaps beyond.

This attracted Canadian Museum of Civilisation (now "History") archaeologist, Patricia Sutherland,  and her Helluland Project, with the usual (or "highly controversial," choose your preferred modifier) agenda of looking for Norse, which she tentatively concluded she had found. As is equally usual, in the absence of anything signed in authentic, contemporary handwriting, nothing definitive was found, and killjoy DNA studies soon revealed that the supposed exotic hairs were nothing of the kind. Good thing hair analysis was never relied on for anything important! The problem is that the carbon dates have yielded Medieval, that is, pre-Norse carbon dates. Since we seem (for now) to have moved beyond dismissing paradigm-upsetting carbon dates as Bad Science, it is at least worth considering what that might mean. Sutherland is willing to go for "early Medieval" seafarers, and points to the new, early dates for the settlement of the Faeroes and the situation in Iceland as a license for going halfway towards full "Wayfarer-"dom.

Email ThisBlogThis!Share to TwitterShare to FacebookShare to Pinterest
Labels: Gathering the Bones, God Speed the Plough, Goodbye to the Vikings?, Pirate History of the Atlantic, Sacred Spring

I hope this finds you well, as I'm personally a bit frazzled, having been up to the city again, this time to look for a place to stay, as it would be a scandal if I moved into with Queenie or the Cs. I've even resorted to the 'Ks.", so if I end  up staying in an (indoor) tipi, you will know why!

Not only to the city but to Oakland, as Mother made a flying visit to her sister's nurses. (Who were a bit mystified by  the origins of her authority, or why she looked like her sister.) My presence was commanded, so that Mother could snub me --although she relented when I asked whether I had had rubella far enough to promise to send me my medical records. A nurse dismissed for the crime of getting too close to Uncle Henry, she was off to Chicago, cool and distant as ever, and me to work.

Postblogging Technology, March 1948, I: The City and the Stars


You were right to tell me not to worry about Magnin's, and for the good of my ego I will not question the way you put it. "I shall give them another call if I have to," means that some of my natural charm was not lost on them, after all!

The disadvantage of sealing the deal is that I my little course on how to be a shop assistant required me to drive up to San Francisco through fog and rain, and then down again, at which point the old Lincoln was so ungallant as to be a regular John Lewis, although it turns out that it was striking for a new distributor, and not portal-to-portal pay. And so much for fetching bacon and eggs for a week on the morning shift. Speaking of which, I need to get this done, as Andy Chu must be getting tired of sitting out in his car for me to bring it down to him. Can you imagine the scandal if I invited him up to wait in the living room with the beaus? I have no idea how I will summon up a smile if Mr. Straight is there again tomorrow, and I must, because so much for a week's pay!
Yes, it's anachronistic. That's why I softened you up at the head! This post isn't late because I had to drive somewhere, but it is late for work reasons.

So, yes, I was having second thoughts about giving up the life of a spoiled heiress --until Reggie called to see why I'd missed my call, which is because I was stranded by the roadside outside Redwood City. As for Andy cooling his heels outside now, and at the Benevolent Association all yesterday, part of that is down to me being on the phone too long --but as you pay Reggie's bills, you will know that anyway.

Perhaps I'll back Andy's stake the next time he has to spend a day playing penny-stakes mah jongg while he waits for me to finish. No. . . I should probably have to claim it on my income tax.