In spite of best intentions, I'm dashing this one off before handing it to George. I'm still in Fort Rupert. Chief is right to the extent that my ship's problem isn't in the engine, but there's definitely a problem, and I'm very glad to be on the ground again.

Well, I'd be on the ground even if my engine fell off. Just not, you know, in one piece. We can't get in there to check, but either there's an engine bracket broken, or the problem is inboard of that. In the spar? Bad news for the bird, if it is, because it'll be retiring in old Fort Rupert.

Not that that's so bad. Fishing's good; the strait is crowded with loggers waiting out the fire season on the water, handlining the biggest salmon you ever saw, on their way to run up the Nimpkish or the streams out of the Coastal range that look close enough to touch whenever the weather opens up. (Which it actually does here, in the summer.) Unfortunately, I can't tell the CO that I've gone fishing, and we've been down to the RCAF station at Coal Harbour and bummed an old --you'd never guess-- Stranraer out of care and  maintenance. Tommy's been a wonder at getting one of the RDFs out of the Lib and into the old bird, which we've repurposed to check atmospherics. Common sense is that the best place for an intercept station is out at the Cape, but no-one's going to buy that as a navigational aid, so we have to find a good place for a radar station, too. (Also, someone has to persuade Ottawa to pay for it. Need more communist menace!)

CO's made it very clear that I'm here until the ship is ready to fly. If he's serious, I think I need to look for a retirement place. If he's not, well, funny enough, there hasn't been an anthropologist around here since the Twenties, and Professor K. has told the Regents that he's got just the student to send up here.

PS: Please just get the dam business settled and come back to Vancouver unventilated.


I'm going to dash this one off and send it via Auntie Grace, instead of putting it in hand in Fort Rupert. Yes, I'm going back there. There aren't many other places where you can put the northwesternmost radar station in the mid-Canada line, so we're going to spend a week or two doing low level surveys 'till we find a place with acceptable radio reception. Problem is, our ship has a dodgy engine --I say, though Chief disagrees with me. So instead of worrying about getting this done while we're trying to fly a new engine from Honolulu to the mud puddle at the end of the world, I'm sending it out now.

Hope you're not expecting much gossip. Had a nice afternoon at the movies in San Fran. (Great Expectations really lived up to the hype.) Dropped B. at Santa Clara, then V.  at her college on the way back. (Tricky business, as we just missed curfew, and she doesn't want to get called back to Chicago for the summer.) A. hitched a ride to LA, where he had some business with you-know-who. I ragged him about where, exactly, foreign spies end and "liberals" start, but he got all huffy about how it's important to the left as well as the right to get the Communists out of the unions, especially influential ones like SAG. I decided not to push him too hard about exactly how you can tell someone's a Red, because, after all, you and I know they've got some sources there. I hope Mr. Wallace steers clear of 'em. Though, frankly, I don't see what the big deal is with working for the Reds back in the Depression, if that's all A. and his bosses and Hoover have got.

God Speed the Plough: "About the ordering of ritual vessels, I have some knowledge; but warfare I have never studied."

We don't really do literary histories of Anglo-Saxon England, any more. The texts are known,  their exegesis secure. It's possible to have a literary controversy over them, but what they are trying to say about the history of Anglo-Saxon England seems more-or-less settled. Mark Atherton isn't the revisionist sort --he's not even a historian-- but he definitely thinks that the texts would benefit from a more serious examination. I've flippantly played with the idea of reading the Anglo-Saxon Chronicles with the same attention given to the Springs and Autumns, and the title is the key quote from the Analects on the Confucian art of war. That is, accepting that Master Kong does not answer Duke Ling flippantly, a true understanding of military affairs begins with the proper ordering of ritual vessels. Get rulership (morally) right, if you want to have a large army, the Sage is bluntly explaining.

In much of what follows, I am assuming that the "praise and blame" in the Chronicles is there, but carefully disguised, because it pertains to ecclesiastical interventions into secular politics. We wall off ritual from politics and warfare at our own risk. Says Atherton, not me!

Besides picking up Atherton's monograph on the new books carousel at the library the other night, this post is mainly inspired by the Gustafson fire north of 100 Mile House, which has left me just a little pissed with your average global warming denier, of which we have an excess in the country to our south. The night before I began writing this post, the fire prompted the evacuation of the entire town. My sister, nephew and niece had left several days earlier, but it is still an open question whether they will have a home --or even employment to return to. Even family lawyers need some kind of local economic base in which to operate.

Anyway, global warming deniers are sometimes Americans, and Americans live in the country to the south of Canada, and on 22 August, 1138, on Cowton Moor, near Northallerton, The Most Reverend Thurstan, Archbishop of York, advancing before a caroccio carrying the Sacred Host and adorned with the sacred banners of York, Beverley and Ripon (but not of Durham), encountered David, son of Malcolm, King of Alba, Prince of Cumbria, styled Earl of Northumberland, in arms. His Grace was victorious on the day, but, on 26 September, Cardinal Alberic, Bishop of Ostia, arrived at Carlisle to negotiate a peace in which David was confirmed in Northumberland, his son, Henry, in Huntingdon and Doncaster; and the bishop of Glasgow was relieved, forever, of his suffragen dependence upon York.

This last bit is the "proper ordering of ritual vessels" part. On any but the most superficial reading, the Archbishop's victory was punished by the King of England. Thrustan was embroiled in the York-Canterbury dispute, which, in his day, turned on the stark difference between Canterbury's twenty-odd suffragen bishops, and York's . . . much smaller number. York had, in fact, only one English subordinate, and its attempts to expand into the north Atlantic world ran into the pretensions of rival bishops [Pirate bishop! Yarr!].  Glasgow was one of Thurstan's legacy suffragens, and losing the See of St. Mungo cost him more than all the gallowglass spears in the world could extract. The question of archiepiscopal status is a question of proper ordering of ritual vessels. (To finish piling on this analogy, there's a parallel with the thesis that global warming denial is a legitimate strategy of Kulturkampf. That is, since all the proposed solutions are "liberal," it is okay for a conservative to mischievously deny the plain scientific facts.)
Read more »
Posted by Erik Lund at 7:46 PM No comments:

A Technical Appendix to Postblogging Technology, May 1947: Silicone Sally, Or, Was It Getting Hot In Here?

Now that we've got that out of the way. . .You  have to feel for Frederick Kipping. 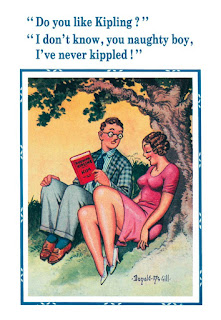 Well, I promised Aunt G. that I'd continue these letters while she's in the bloom of motherhood --Should I spoil it by saying my new nephew or niece's name? No, it's hers to tell! Aside from that, I know Auntie always adds some family gossip, but I've got nothing. I've been spending half my time at the field in Hawaii, wiring the P2Vs that Lockheed's been able to deliver so far, and the other half doing radio proving flights all over the North Pacific. In fact, I'm just down the road from Quatsino, and will be handing this package off to George Wallace in a sec.

The one advantage of this is that I'm all over the place and get to see everybody. We're flying down to San Fran after we finish up here. Tommy'll get to see his wife and kid, and I'm going to hook up with the old gang. A., is over on the West Coast to meet up with some sources. (If you're wondering, like I was, they're union guys with something to say about communists in the ranks; but with stuff in their background they don't want coming out, for which the FBI has a bit of a reputation), so V. is coming out, and B., too. We'll see a movie, then maybe dinner and some dancing, just for old time's sake.