Postblogging Technology, March 1943: An Appendix About Flooded Basements (Any Port in a Storm)


I had a friend in graduate school, much smarter than I, who used to love to sing "The Leaving of Liverpool," although he probably was referencing a version with more gravitas than a dance mix. (When the 70s London punk acquired gravitas I leave to the reader. Probably when its fans got old and nostalgic. Btw.) In the end, we'd both have been better to ship off in a "floating hell." At least Captain Burgess is hiring. There is also the matter of the slice-of-life anecdote from Time about the American troops finding favour by draining the basement of a stately home of England and recovering the squire's favourite brass hunting horn. A flooded basement is not good for a house, and it really is telling that there was no alternative to the generosity of some bivuoaced troops. That kind of thing can't be good for the housing stock, although it is not like that sort of thing is unique to Britain. Vanport was swept away in 1948, rather than the spring of 1944, but it has its parallels.

At this modern dead end, it is well worth contemplating why there's a clipper bound for California in the Liverpool docks for a man to sign onto. Yes, Oregon is not California, but work with me here. 1944 is going to give way to 1947. There will be a housing boom in California, and the loss of the homes of Vanport will just push customers into the Portland market. Meanwhile, a shortage of housing is a crisis in Britain. What makes up the difference?

For one thing, there is the "X" factor pushing up the building rate in California. What could it be? 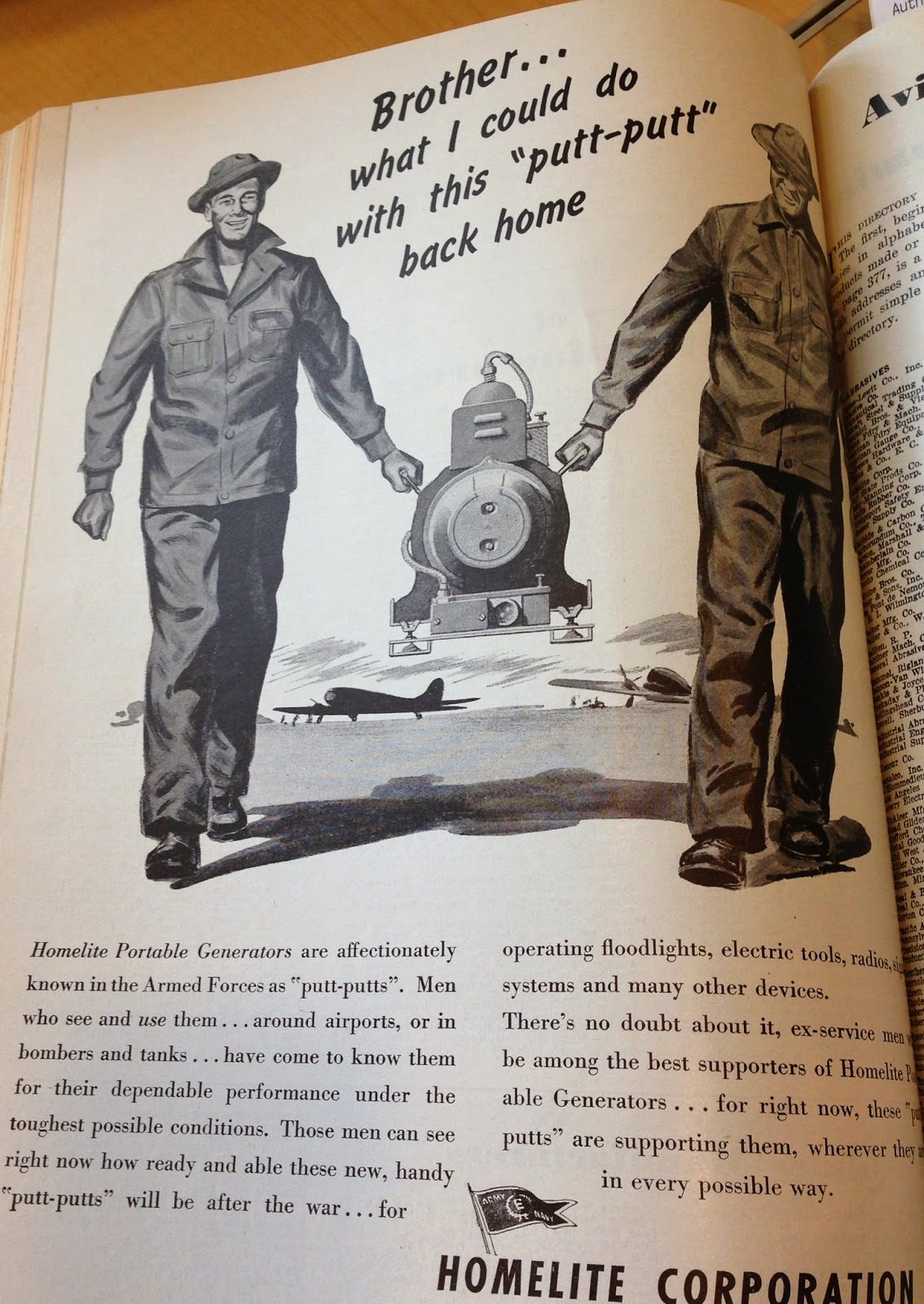 It's probably not impossible to guess that I have a theory, and that there's a reason that I punctuate two ads with meditations on graduate school. My provincial premier just announced, for approximately the millionth time, that we have a "looming skills shortage" in this province. It must be true. I'm 49, and I've been hearing it all my life.*

A little sarcasm directed at the "skills shortage" mantra aside, that cannot be the explanation. I want to argue that wartime skills acquisition and new tools  boosted the Californian construction rate to record levels, but have to deal with the difference between the Californian and British experience.

Is the difference real? After all, insert very tired old "Chinese character" joke here. Yes, I think that it is real enough. Emphasis on think here: home building served as a stimulus to the American economy in the late 1940s. It was a major stimulus to the economy of interwar Britain, notably in the southeast, the main target of the Blitz. If a shortage of housing is simply a demand for investment, it ought to be an economic stimulus. The greater the shortage, the greater the stimulus. That it was not tells us something about the nature of the immediate postwar British economy that I am not really qualified to comment upon.

What is true is that the area was also the communications area for the largest, most costly military campaign in history, that the full implications of this have not even begun to be teased out, that the labour that ought to have been pumping out basements was elsewhere, and that a whole lot of routine maintenance is being neglected. The whole damn thing requires more investigation than it's had. Today's introductory exploration is directed at exploring where the missing labour went. (That is, it is going to be a talk about Overlord logistics when it gets going.) But I find that I have quite a lot of underbrush to clear first, and that, happily, lets me do an image-heavy posting about Cool Stuff instead of whether the amount of concrete consumed by the Mulberry ports was "significant."

But first I am going to take a step back and talk about lingering, hidden damage, because I've dragged The Civil Engineer in War for other reasons that will emerge in good time. (About now would be good, but there's only so much time in a week.) 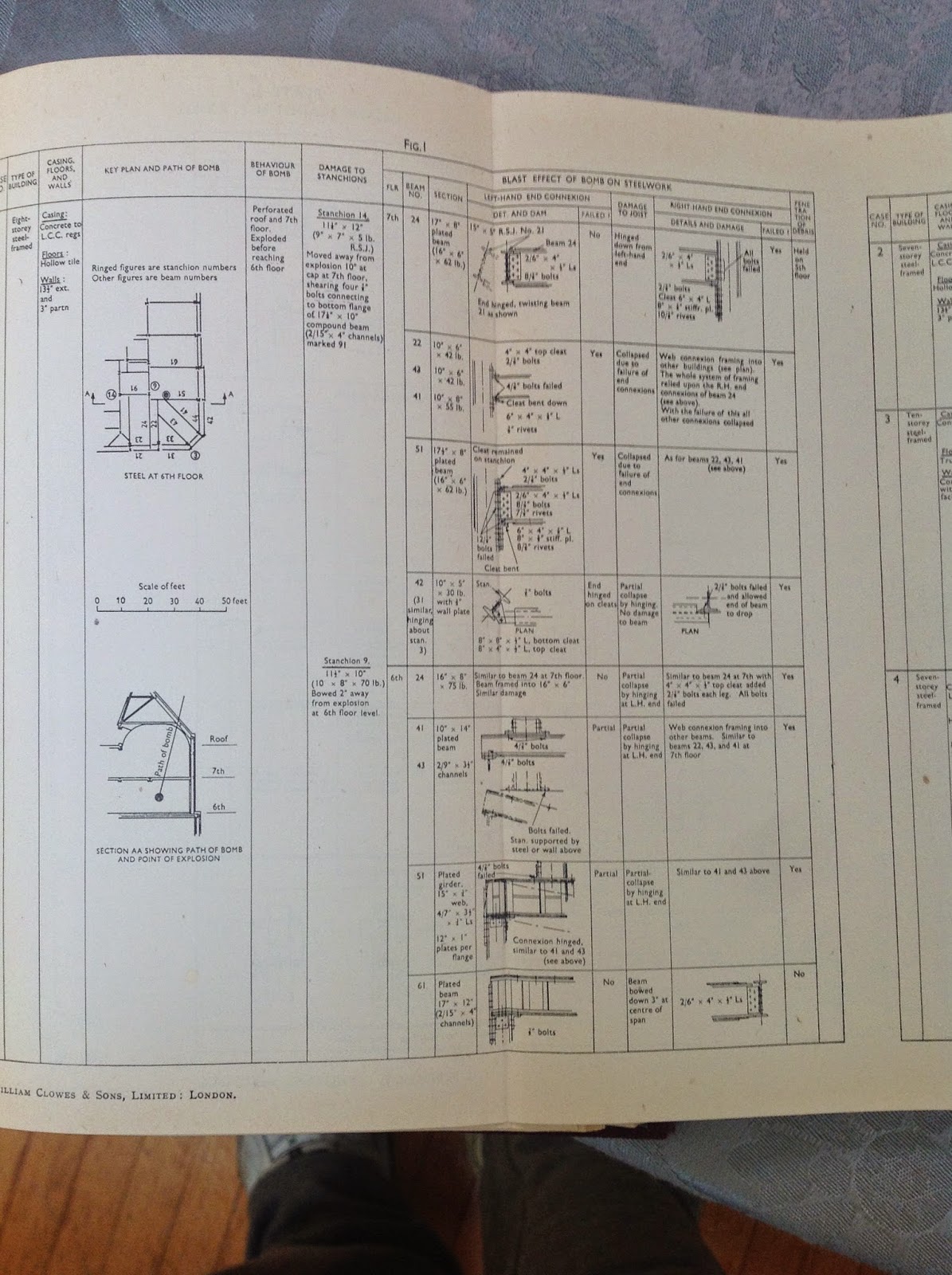 In 1939--45, and especially in 1944--45, John Fleetwood Baker Edward Leader Williams and Douglas Lax spent a great deal of time looking at the steel building frames that had been pushed around by high explosives and trying to figure out whether they were going to fail, and, if so, how they should be repaired. The page above is one of an eight page foldout in their article "The Design of Framed Buildings against High-Explosive Bombs," which they seem to have thought would guide the architects engineers of the future as they built against the threat of nuclear war.

Fortunately, that's not how it turned out, but the very long list of examples does give one a certain impressionistic sense of the number of buckling, thrusting, twisting beams and bending bolts there were out there in southeastern Britain in May of 1945. This is not much of a revelation. The Wikipedia article does not cite a source for a quoted figure of 1.15 million structures damaged or destroyed in the Blitz, 1.127 million in the V-weapons offensive, but they are hardly little known figures. (For the record, one of Steve Zaloga's books is in the bibliography, and Steve is awesome for these things.) All I am doing is putting specifics to abstractions.

The point here was what people were doing instead of timely repairs. In the context of this blog entry, that naturally leads me to this

The images are from Wikpedia's article on Guy Maunsell's Maunsell Forts, a system of stalk-legged AA gun mountings in the Thames and Mersey estuaries, hastily erected in the course of 1942 for very good reasons. 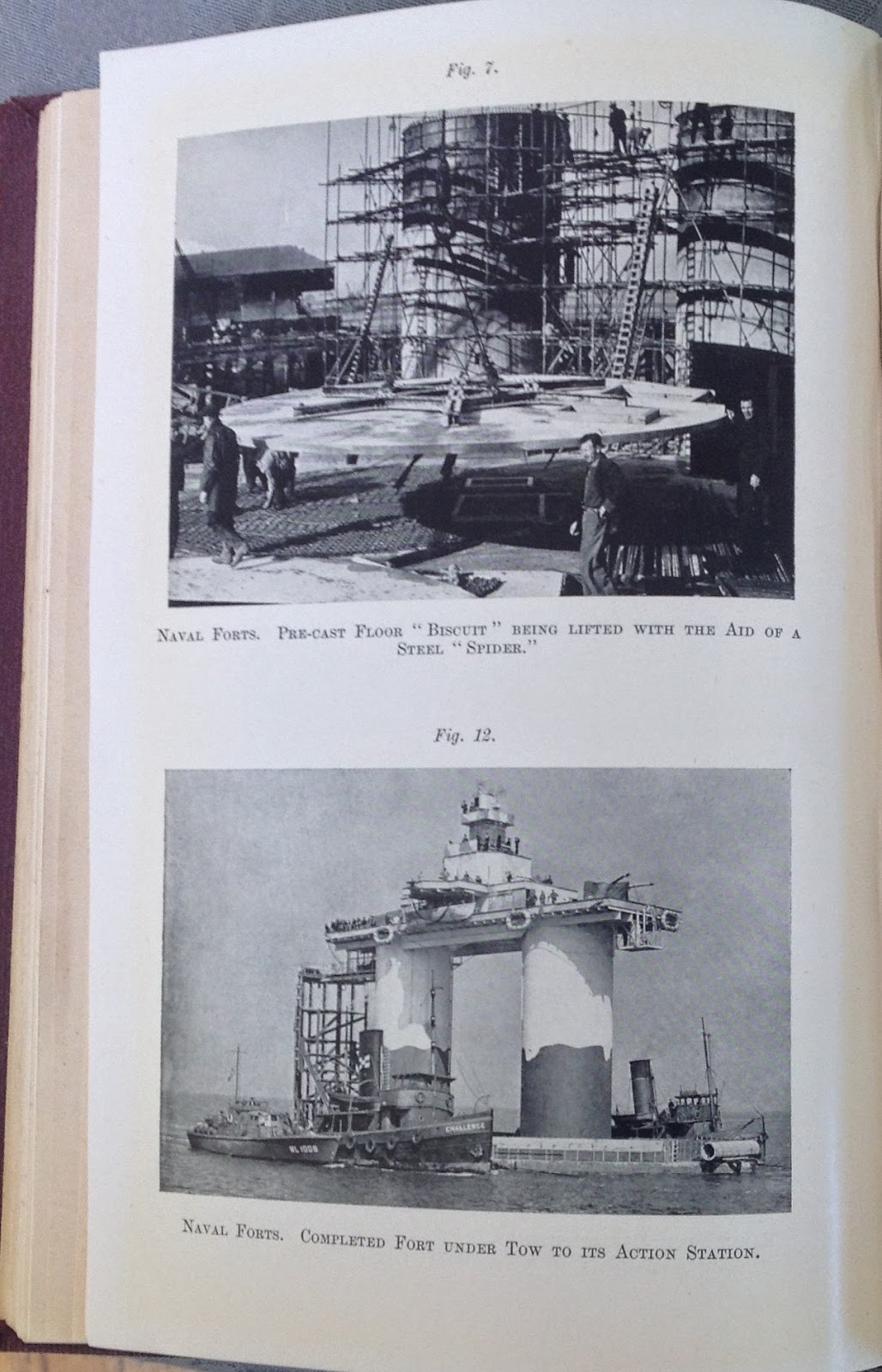 Here they are being erected and towed into position (J. A. Posford, "The Construction of Britain's Sea Forts,"Ibid, 3: 132--63, 138), and here's the schematic diagramme from back in the day when they were an integral part of the Air Defence of Great Britain instead of the indefinitely delayed punchline of a long-running joke about the tragic consequences of untreated personality disorders. 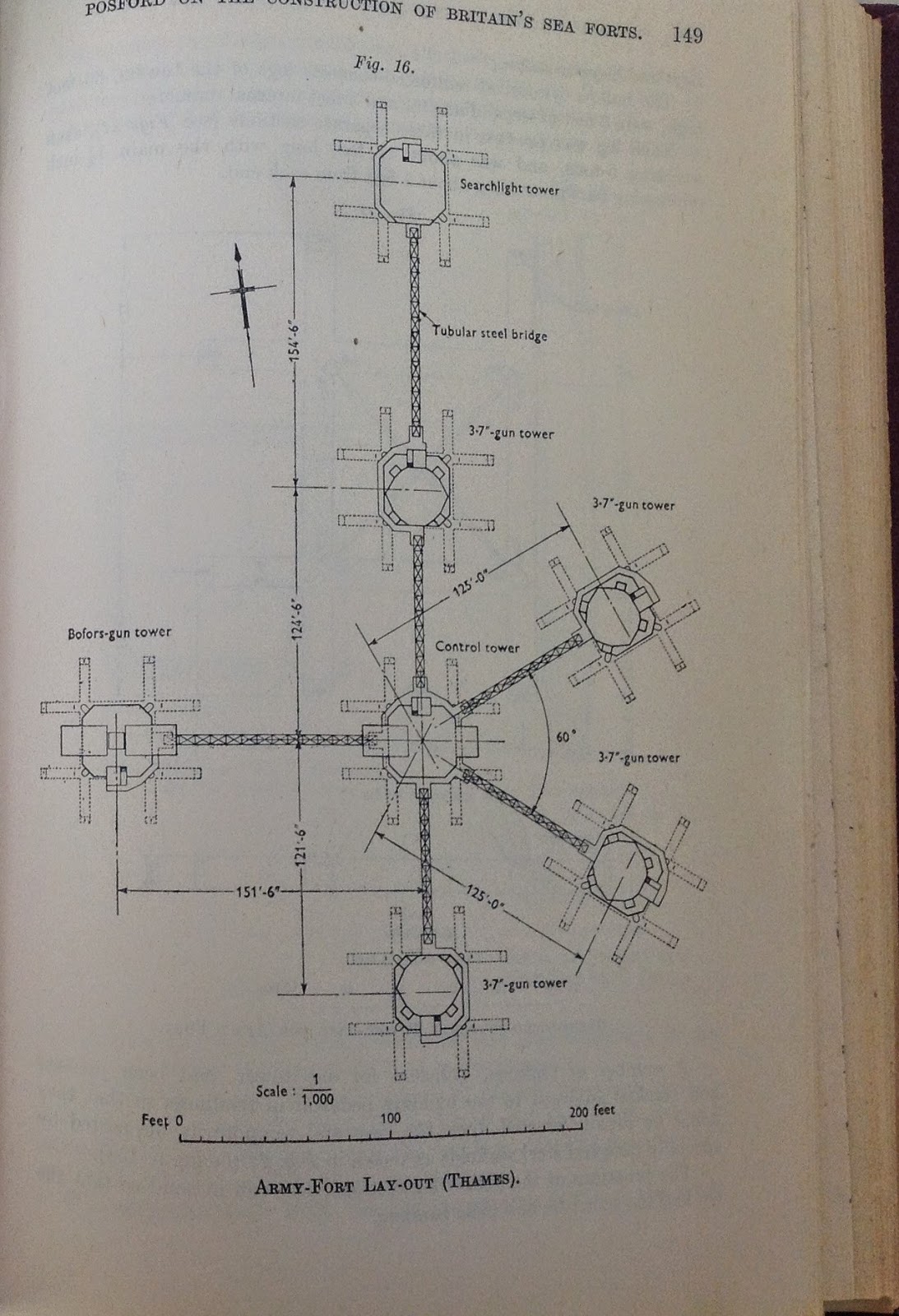 I suppose that if I were being concretely dour about it I would try to come up with some kind of estimate about what they cost the nation in terms of labour and raw materials, but Hydrographer Rear-Admiral A. G. N. Wyatt gives  £400,000 for the Navy fort and £71,000 each for the Army forts, and I suppose that that will have to do.  At £5000 per Spitfire, it is not a crazy amount of money. What is interesting is the reason that they were built, which was less to put antiaircraft guns in a fun new place, and more to ensure radar coverage over the estuary to narrow down the drop area of German influence mines. I have said before, and will say again, soon, in re Normandy, that the impact of mine warfare on the British war effort Needs More Study.

On the other hand, there is nothing dour about the Maunsell Forts. They're Boy's Own cool, and not even the fact that they were mainly there to support a generator to run a radar, as opposed to guns, is going to change that.

Moving on to something distinctly weirder and more easily forgotten on account of they were built on what was soon going to be one of the most secret and sensitive of national installations, we get to "No. 1 and No. 2 Military Ports."

Here's the problem: with the fall of France and the Low Countries and the virtual closing of east and south coast ports to large ocean-going ships, it became apparent that additional deep-water berths were needed for War Department traffic. Existing west coast ports could not handle the traffic, so clearly the solution was to build facilities capable of loading from rail 6 400 foot ships at a time, with the capacity to take 600ft ships drawing up to 30ft, on the far northwest coast of Scotland.

Just to be clear, here, these were not "real" ports. They did not require warehouses. Goods would be shipped through "just in time," and would largely consist of men, warlike stores and mechanical transport. Nor would there be housing for dock workers. These would be men in uniform, and they would live in barracks for the duration, as it was not proposed to build new cities out on the margins of the Highlands. This does not mean that a great deal of construction was not involved:

It is still more than a little amazing that they did this, even if most of the cranes in the upper photo were borrowed from Southampton from the duration.

So what, besides the images and the general coolness factor, am I driving at here? Implicitly, this is the prologue to the Mulberry ports, the rehabilitation of the ports of northwest Europe, the supply problems of the Liberation Campaign, and, less celebrated, the campaign against the oyster mine. The issues that it revolves around are port congestion and mine warfare, and the point I want to end by making is that there is a critical bottleneck British war effort that we are glossing over: concrete and, to a lesser extent, structural steel are cheap and plentiful, but they have to be got to where it is needed. Normally, that work is done by barges and other forms of coastal shipping. We are looking down the barrel of a multivalent system of interlocking checks within this system.

We will not necessarily see a top down assessment of a shortage of reinforced concrete any more than anyone has ever given us an "audit of war" of failed bolts. The siege war that Britain and Germany imposed upon each other in 1940--45 was a complex, total effort with consequences that have to be teased out, except in those very limited cases where someone actually investigated the issue and proclaimed (at least, in public) an emergency.Without that top-down inquiry,  a shortage of building material is going to be sensed in a tangle of symptoms such as perpetually flooded basements, and the piecemeal condemnation of old buildings for decades after the war.

Which, by the way, is my provisional answer as to the difference between housing boom and housing crisis: price and availability of building materials.

*2012, when it required relaxing the national guest worker programme. 2013, when the skills shortage required tax cuts. In 2014, it had less sinister implications, and just required more Federal money, while in 2006 students just needed to be able to transfer credits between more colleges. In 1998 it was about funding more seats.

** Son of? Google turns up an impressive array of civil engineers (and vaguely civil engineerish types) with permutations of the name. I'd say something snide about higher education as the reproduction of class and social capital, except that I assume that the Leader Williams are rich, and might give me money. 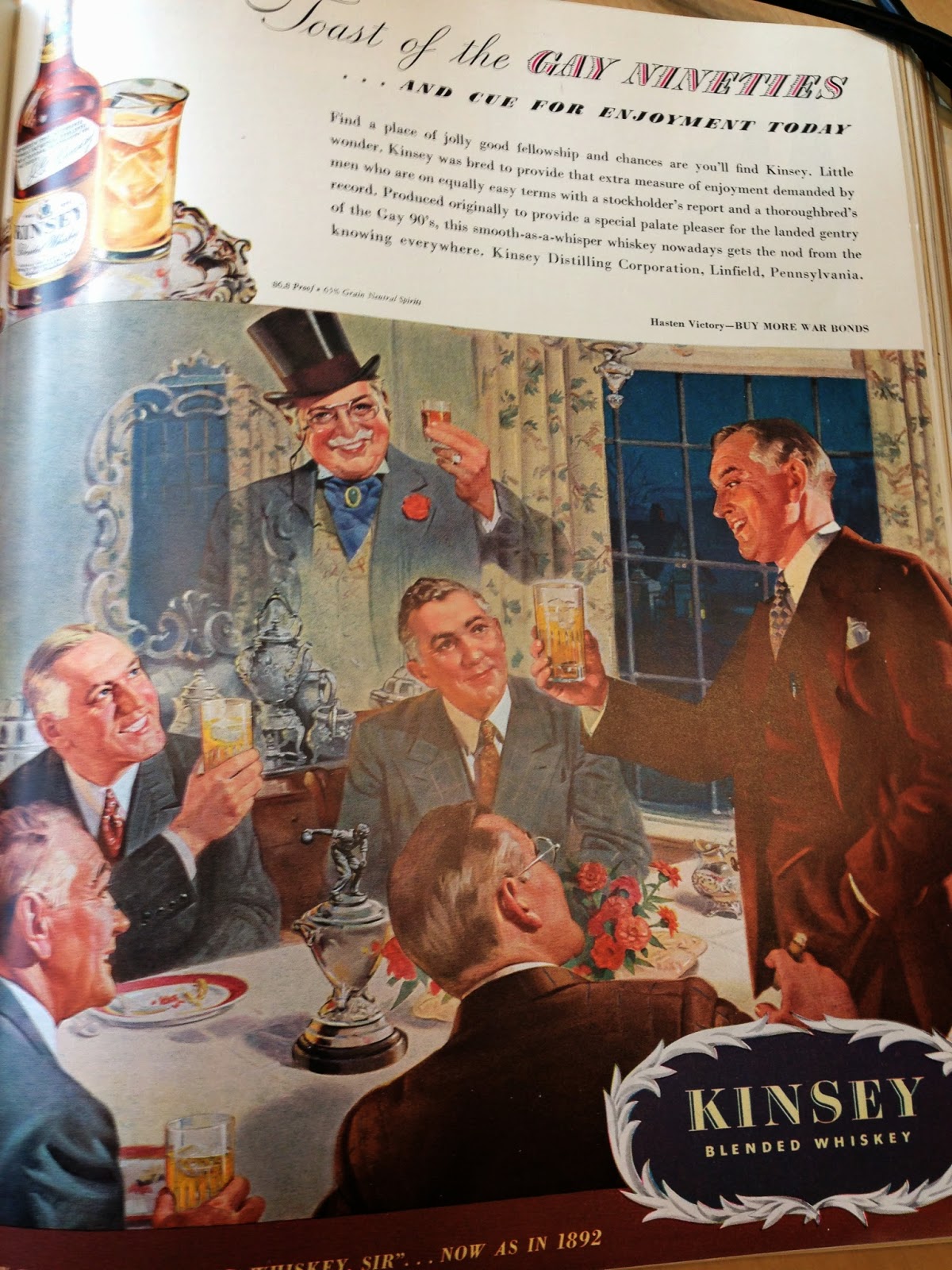