To put things out of the way first, one of them is not Canada Day. I mean, let's all celebrate up Canada way

but as a country we seem to have taken this year's festival-of-celebrating-finding-a-way-to-be-a-binational-nation as a day of relaxation. Or I have. (Strange way to relax, I admit, but otherwise guilt would have driven me to write something more ambitious.)

For our country, there will be time enough to marvel at how "secular stagnation" can coexist with an incipient labour shortage tomorrow. Today, we can cheer on our our compatriots in generalised bilingual anxiety in their footie match! ("The Song of Brabant?" You know, if I were a Vlamand, I might be upset.)

The things that weigh on me are, first, a generalised fog of exhaustion. Curse split days off. Second, many, many defeats in solitaire Titan matches with my iPad. Which are both cause and effect here, but whatever. It's going to take a great many matches at sound mind to push my effectiveness rating up to where I had it.

Speaking of holes, there's a lot to cover this summer, and not posting is a way to not get it done. Time, then, to do something both unambitious and needful.

Port Unloading Capacities in the European Theatre of Operations

Antwerp needs a serious dredging before it can be brought into use, and there's the small matter of the German army camping its estuarine approaches, but it is pretty much the star of the show here. Antwerp is going to receive the attentions of 4728 V-1s and 1712 V-2s. It will suffer  8333 civilian casualties, losing 1600 houses destroyed, 16,000 rendered uninhabitable, and 41,000 damaged. (147) .

Now, I cannot pretend to be in any sense a historian of postwar Britain. There was a Beveridge Report, I gather, and then some central planning stuff, and I think health care was involved? Something about postwar rationing and bad teeth and council flats and a lot of rain? And Adrian Mole? The image in my head is either a postapocalyptic nightmare as rendered by a BBC special effects budget or an episode of Last of the Summer Wine.

Fortunately, I can read and extract, specifically, a report prepared by the Ministry of Housing and Local Government for something called the Economic Commission of Europe, which required its reports in English, French and Russian, because that was then. (Postwar Housing in the United Kingdom: Prepared for the Housing Committee of the Economic Commission of Europe [London: HMSO, 1962]).

Summary: “This book gives a broad outline of housing activities in the United Kingdom since 1945.”  Which, given that it's trilingual, short, and given over largely to pictures, means that the immediately following definition of "United Kingdom" takes up a remarkably large share of the available text. Fortunately, we're looking for numbers now:

Overview: "Since 1945, over 4 million permanent houses and flats have been built in Great Britain. Nearly 1 ½ million have been built by private enterprise, almost all of them for sale: over 2 ½ million have been provided for public housing authorities, for letting at moderate rents.” (1) The essential problem, as the Ministry sees it, is that demand for housing has been so strong that almost all private building has been for sale. The need for rental accommodation, not vaguely socialistic leanings, has driven public building. Roughly 6 million houses in England and Wales, about 40% of all dwellings, are owned by the families who live in them. Four million houses and flats, including 1 ¼ million built before 1939, are owned by local housing authorities.

As the numbers suggest, the nature of homebuilding in the United Kingdom changed dramatically during the war. In the 1930s, about 300,000 houses and flats a year were being built in Great Britain. By 1939, 30% of the population were living in buildings less than 20 years old. Many of the balance were ill-built slum housing erected during the Nineteenth Century, and slum clearances were in full swing. Then came the war.
The number offered here is that “three quarters of a million houses completely or largely destroyed.” Plus many others that were damaged. Remember that the classic assessment is that 1.15 million structures were damaged or destroyed by conventional bombers during "the Blitz," 1.27 million were damaged or destroyed during the Vengeance campaign.  We're moving between residential units and structures a little easily for my taste, but that may be beside the point. As the Ministry observes, only 200,000 new houses were built during the 5 ½ years of war. The building cessation cost the economy more housing units than the bombing, for a net loss was 2 million units, with a fudge factor of loss through dilapidation. That's a big hole to dig your way out of.

By 1948, public building had reached a “comfortable rate” of 200,000 units/year, and the balance of the immediate housing needs being made up by the erection of 150,000 temporary units. By 1951, more than a million units had been added, and the government set a target of 300,000 new houses a year. To achieve this, a postwar licensing scheme limiting private building was progressively abolished, being finally eliminated in 1954. It is noteworthy that planning for housing stock has been consistently upset by demographics. A higher rate of population increase, more immigration, an increase in life expectancy, meaning old people to house, and declining age of household formation have all put pressure on planned building.

Population, Households and Dwellings (in millions)

Vital Statistics (per thousand of population) 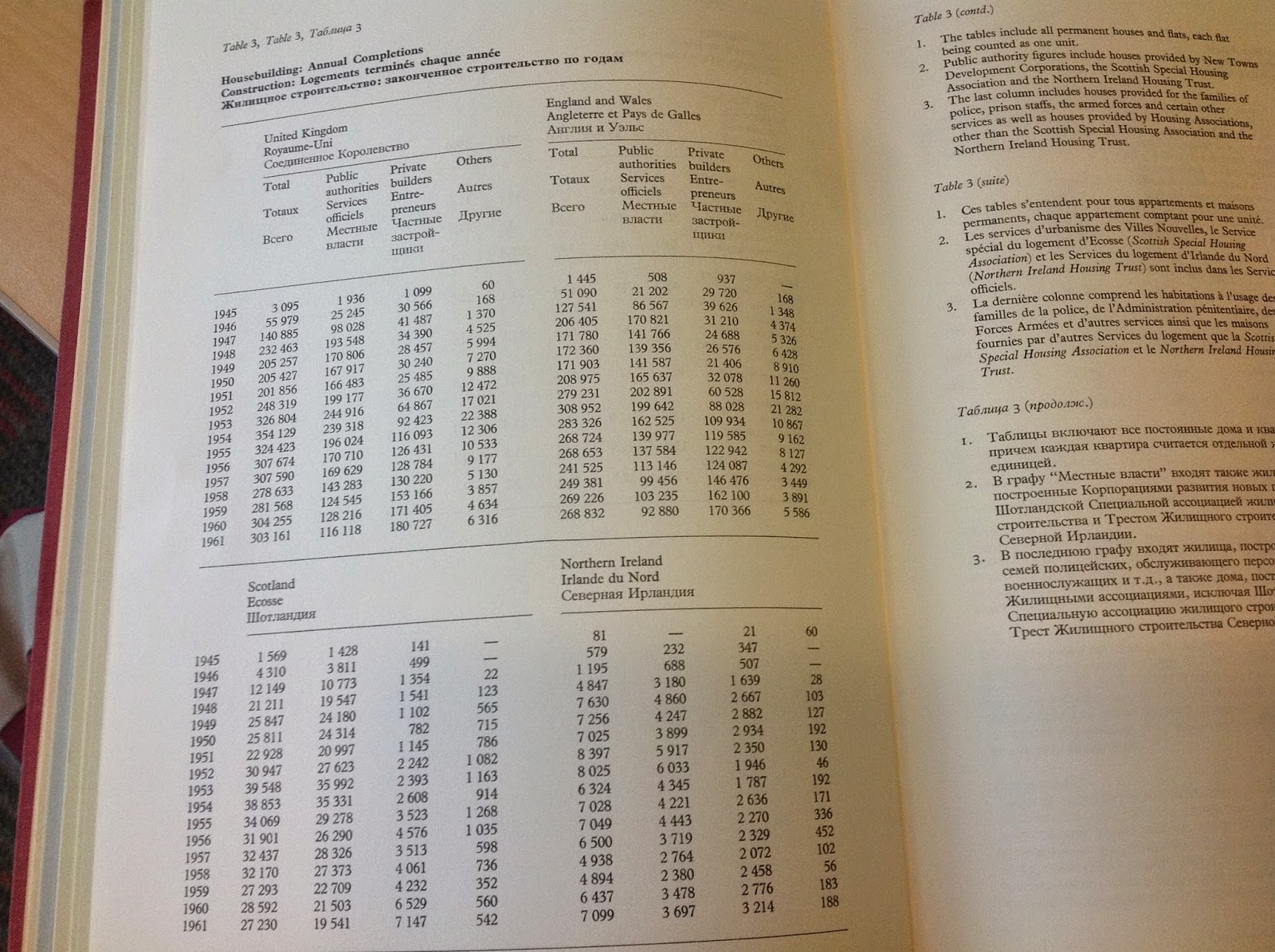 There are old political wounds to be bound up here. Why are housing starts so low in the postwar period, compared with the prewar? In the immediate postwar era, private starts are licensed as a means of holding imports down. I suppose that the numbers for 1958/9 might indicate a recession. (I would have to look that up, and it would be hard!) Still, these numbers boiled blood, once upon a time.

The issue that gets buried here, I helpfully suggest, is the lost category of "damaged" homes. We need, and do not have, figures for repairs and renovations. Antwerp's numbers, which may or may not be commensurate with British, suggest that ten times as many homes required urgent repairs to be made habitable as were destroyed outright. From the numbers here given, that would be seven and a half million units? I suspect that number is far too high, that some units under the Belgian "uninhabitable" heading would shift over to the British "completely or largely destroyed" column.

When I read these numbers, I have awed recollections of the rain of a Vancouver winter storm sweeping across the bay panel windows of the living rooms of the quads at the University of British Columbia's Fairview graduate residence and running down the outer, stucco walls into the shrubs below. In a fairly solid higher education tradition, the star architect who designed the low rise residences neglected to provide for rain gutters, with predictable results, but no images obviously available online, because UBC would really like you to send your children to live in its residences, and that's the kind of publicity that it can live without.

So here's a generic Canadian Press image of what happens when the building envelope of a structure in a rainy climate is either compromised, or not seriously considered at all. And here is a Wiki article on the remarkable social failure that was the global, not just British Columbian, "leaky condo crisis" of the last generation. In strategic terms, the V1s rained down on London as part of a total war effort to stop the invasion. Guns and ammunition that were defending London weren't fighting in Normandy! You could, and I will, say more about ship clearance rates and the total productivity of the British wartime economy,  but  for today, it suffices to note that a very small amount of damage in 1945 can have very large effects in 1955 if it lets water in, and is not fixed in time.

I would have more faith in the historical and economics professions to have taken these things into consideration in their analysis of the postwar era if I had not seen with my own eyes a torrent of water cutting through stucco because an architect, who was paid actual money to design an actual building that rose directly opposite eighty-year-old houses, forgot to provide rain gutters.

*Speaking of sources: To the Imperial War Museum: £7.50 per licensed non-commercial image emailed to buyers within five working days is not a viable business model? This is part of some cunning scheme, right? Do you have a side business in pirate ships and Jolly Roger flags?