I honestly don't know how I came to the idea that cosmic rays were boring. It's a tribute to an undergraduate education, maybe? High energy photons are emitted from your mundane spinning galactic cores, supernovas, and the odd black hole, impact the Earth's atmosphere, lock free some subatomic particles, including a few with goofy names like "muon" and "meson," which kind of have to be fake, considering that there are guns in Traveller that shoot them, and that, anyway, you don't need to know about for chemistry class. (Or Physics 420, come to that.)

And then there's this:


I don't know if you're following Agent Carter  or not. I mean, Bench Grass obviously isn't. Like the back pages of Whittaker Chamber's Time, we may seem unusually interested in physical culturalists and Gypsy Rose Lee, but, in fact, we concern ourselves with Great Art and Fine Literature. However, we hear that it is a fun television show.

More importantly, the premise is that, in the summer of 1947, defence contractor Isodyne has done its own run of atomic bomb testing (as if), and, unexpectedly, discovered a goopy, black stuff that recalls episodes of Agents of Shield and characters such as Darkstar and Cloak and Dagger. Instead of calling it "the dark force," though, because that would be silly, they're calling it "zero matter," and it is something with enormous potential to blah blah. Cloak, notably, uses his dark stuff to teleport, which could be a link with Agents of Shield. Someone who watches that show might find out. And have age-inappropriate reactions to Chloe Bennett.

And now for a completely irrelevant thumbnail photo to illustrate the post before the jump. 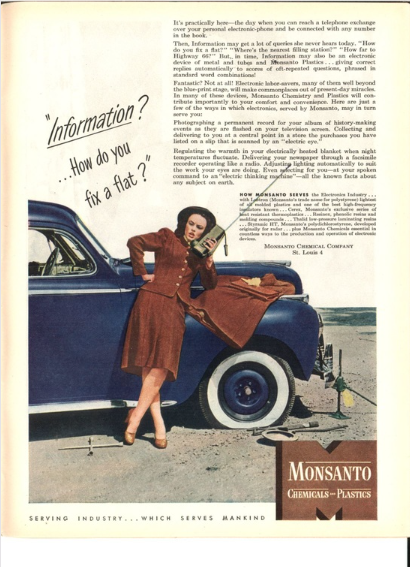 So, just to sum up, an atomic bomb test goes wrong, creating a never before seen state of matter which has enormous implications for the future.


I will now turn things over to Dr. Bowen C. Dees: "Just as the so-called 'pure' research in nuclear physics unlocked the mystery of nuclear fission and resulted in the production of the atomic bomb --with its tremendous potentialities in war and peace-- so it is that research leading to a more complete knowledge and understanding of cosmic rays may some day yield results of unforeseen but tremendous importance to all mankind."

Leaving aside the peaceful potential of atomic bombs, writing that in 1946 calls exactly one thing to mind:


Born in Batesville, Miss., Mr. Dees earned his bachelor's degree in 1937 from Mississippi College and his doctorate in physics from New York University in 1942.
From 1937 to 1943, he was a graduate assistant in the physics department at NYU, and from 1943-44 a physics professor at Mississippi College.
From 1944-45, he taught in the radar school at the Massachusetts Institute of Technology, and from 1945 to 1947, he was an assistant professor of physics at Rensselaer Polytechnic Institute.
In 1947 in Tokyo, Mr. Dees was a civilian physicist in the scientific and technical division of the headquarters of the Supreme Commander for the Allied Powers. When he left in 1951, he was division chief.

All pretty much standard. The interesting career trajectory of the Greatest Generation is on show: Batesville, Miss leads to a Mississippi College bachelor's degree leads to a New York University doctorate leads to a position back at Mississippi College. Someone's got to learn the rubes their simple harmonic motion! . . And then it's MIT, Rensselaer, Washington, a deanship at Arizona, the Franklin Institute, with time out for . . Tokyo? Okay, we get it. Someone had to look at the Japanese bomb programme, and, given that it's just the Japanese, why not the boy from Mississippi.

Only not so much. See, the guy who discovered actual, real, zero matter? He's in Tokyo. I won't let this hang too long. Here's a link to the Wikipedia pages discussing "muon-catalysed fusion" and "exotic matter."


Dr. Yukawa did not, of course, build a muon-catalysed fusion bomb. So far as we know, no such thing is possible. That does not, however, mean that he wasn't working on one. Obviously he wasn't going to get very far without first having a muon in hand, but both Andrei Sakharov, of Soviet H-bomb fame, and the much more obscure Frederick Charles Frank, of the University of Bristol, both predicted muon-catalysed fusion "before 1950," though just exactly when would be interesting to know

In last week's number, I noted Dees noting the "mesotron," a particle "intermediate between electron and proton," carrying either a positive or a negative charge. This, it turns out, was not Yukawa's predicted particle, but rather the muon, first detected in 1936 by Carl Anderson, hot off the discovery of the positron, which he detected, also in cosmic radiation, in 1932 and received a Nobel for in 1936, a pretty fast turnaround for the Nobel Committee, and validating Dirac's prediction, although the positron was discovered without theoretical insight. Heck, the neutron hadn't been discovered at that point! Although a bit of a disappointment, as he was looking for the antiproton, not detectable in cosmic radiation with the technology of the time, as it turns out, and finally seen in the Berkeley particle accelerator in 1955. Andre Gsponer and Jean-Pierre Hurni, authors of the bit linked to above, think that Teller was working on antimatter bombs as early as 1948, which,  I don't know, but have I mentioned that we know virtually nothing about the development of the French H-bomb programme? I probably should. You need significant numbers of antiprotons to make an antimatter weapon work, and it would seem to be impractical to make, store and move them. However, a multi-stage device in which the preliminary stage creates the antiprotons is, at least conceivable --surely not so much crazier than the Rube Goldberg device which is the working Teller-Ulam thermonuclear weapon.

That's what I'm talking about!
It's worth stressing  here that, because the mesotron had not been predicted, and its properties were unknown in detail. Since its disintegration violated conservation, it was assumed that it produced an undetected "neutrino," previously postulated to save conservation in the case of neutron decay. (And how strange is it that neutrons are stable in an atomic nucleus, but have a fifteen minute half life in the wild?) No-one had seen a neutrino in 1946, and "some other explanation" was possible --an explanation that carried massive implications for atomic physics.

Now, the inferred existence of primary cosmic rays with energies millions of times greater than the x-rays produced by atomic fission --itself several times hotter than the surface of the Sun-- was a pointer to much more powerful reactions going on somewhere out there in space. Science had already given us the fission, fusion and antimatter-annhilation reactions. It would take some time for cosmology to come around to accepting that it was all down to the boringly conventional behaviour of massive, spinning, galactic cores and the like, though the then-postulated neutron star, with its neutronium stuff, was weird even by the standards of the wild frontier of particle physics as of 1946.

Out at that wild frontier, we have . . Well, we have a great deal that we don't know. The press jumped on the new atomic bomb enthusiastically, giving us all the later tropes with such speed that if a real-life Alpha Complex is some day discovered under the campus of Utopia College, I won't be completely surprised.* This enthusiasm effectively concealed the fact that the actual atomic programme was in shambolic disarray, which is hardly surprising given the rate of demobilisation. There weren't many atomic bombs, they were not being well cared for, and their chosen carrier's future career ("six turnin', four burnin'") is neatly summarised by the fact that the front-cover Pratt & Whitney ad on the December issue of Aviation mentions this still-secret plane. Oops! (Also, I had to work that in here somewhere.)

Nicely encapsulating the shambolic disintegration of America's effort to make the world safe through larger bombs is the fact that Edward Teller has been packed off to Chicago, and the life of a mere university professor. Teller wanted to build a bomb in which light element material (deuterium, tritium, lithium, something like that) was packed in with the fissile material to create a "boosted" fission weapon. This was the "alarm clock" device, or, in Sakharov's reworking, a layer-cake. The fact that Eric Welsh and the Alsos Mission were tracking German light element production at least vaguely suggests that Allied scientists were already thinking along those lines during the war years. Don't ask me what they made of the German weapon programme's search for thorium. This? Although a letter from Germany suggesting that the Germans were working on a transuranic fission bomb had apparently been received. (A German physicist recalls sending it, but this belongs to that part of the German postwar psyche that was always secretly anti-Hitler.) I'm not saying that the scientists of the Alsos Mission were looking for an americium bomb -- Fat Boy, after all, was a "tranuranic bomb"-- but, hey, why not?

So there were all these crazy ideas out there, and a crazy man; but no atomic bombs. This became something of an issue in 1948, during the Berlin Blockade, when the Army casually asked how many bombs it might be able to count on in a war, and got a disappointing answer. It wasn't just that the Russians were catching up, or that there weren't enough fission bombs. Fission bombs were expensive. Five years later, the British would be eased into hydrogen bomb research by the idea that they would be able to conserve on plutonium and U-235. Revelation of both Soviet atomic spying and their first test thrust Teller and his "super" back into the focus of attention. A little less than six years after the cover date of the article in Radio News in which Dees' article ran, the Americans would test their first "thermonuclear installation," as the Russians sarcastically called it. 54 tons, consisting of a TX-5 boosted fission bomb, a plutonium wick dipped into a tank of cyrogenically-frozen deuterium, surrounded by a depleted uranium tamper (which undergoes fission when it is showered by prompt neutrons from the deuterium fusion).  Eleven megatons of boom!

It's pretty unexotic given the alternatives I've gestured at here, although we need to bear in mind that it is only fourteen years since Meitner and Hahn discovered uranium fission in the first place. But it certainly was carried on the back of cosmic ray research. The scientists of the 1950s knew a great deal about subatomic matter thanks to experimental work with cosmic radiation. What's really interesting here is the other programmes: French, British and Chinese, all trying to reinvent the wheel, as it were. Sir William Penny's Green Grapple was definitely a non Teller-Ulam device. I am sure that it didn't differ in being in any way exotic, but that doesn't mean that the British hadn't turned over crazy ideas (again, muon-cataylsed fusion bomb, anyone?) along the way. The Chinese, even more interestingly, substituted an "x-ray lens" in their first weapon for the American "x-ray" reflector. Somehow increasing the intensity of the gamma radiation falling on the secondary component is key to producing exotic particles and perhaps catalysing exotic fusion reactions. As far as we know, this is all pie-in-the-sky stuff, but we have to test these ideas before we know they won't work.

And then, somehow, we got to this modern age of ours, where high-energy cosmic radiation and the curiosity cabinet of particles and exotic matter they produce is boring.

*In fairness (or whatever) to Roger Babson, he only wanted to give the college a giant A-bomb shelter, not build the college in the shelter. If only he'd had a bit more vision.