Further to the Last: New Light, Not Necessarily On The Converting Sacrament

Lameen and Graydon have been bugging me for years to subject my crackpot hypothesis to DNA testing. It may seem like I've been ignoring them, but, in reality, I've been creating elaborate counterarguments in my head, which I would have talked about already were it not for Windows doing a forever update while I lounged around in pyjamas on my Surface. (It's a day off, first of seven. What can I say? Pizza later.)

In retrospect, my time might have been better spent watching the latest episode of Agents of Shield than spinning my theories in my head. Say what you want about Hydra, but they're damn good DNA testers. 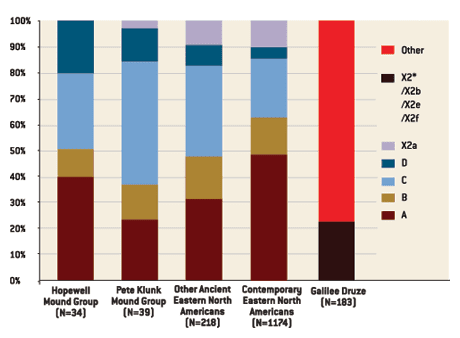 The last column is because this is about a Skeptical Inquirer article about ancient Canaanites being maybe the ancestors of modern native North Americans. Oh, those wacky Mormons.

The X2a bands show that there's room for future discoveries. We wouldn't even know that there was an X sub-haplogroup present in aboriginal American populations from the Mound City samples alone. That said, we have a pretty solid overall profile of the mitochondrial DNA picture of pre-contact Eastern Woodland Indian populations, thanks to the Hopewell horizon's enthusiastic bone-gathering. This is important, because genetic genealogists trace regional ancestry through three major inputs: autosomal DNA, present in X chromosomes; Y DNA, which is passed purely through the father's line; and mitochondrial DNA, the most recent and most exciting discovery, and present only in the ovum, and thus passed exclusively matrilinearlly.  Of these, autosomal DNA loses Native American flavour after six generations, while Y DNA mutates so slowly that half of Native Y DNA is shared with common ancestors who spread into northern Asia and Europe two Ice Ages back. So if you are looking for Native ancestors in commercial DNA testing, as many people at my stage of life are, it's pretty much mitochondrial DNA you need to look at, and, subject to new research, if you have a Cherokee great-grandmother, you can only prove it genetically by testing with X2a, D, C, B or A haplogroups.

That being said, I'm a complete amateur at everything but history of science (humblebrag appeal to authority!), so let's look at the testing.

The hotlinks don't go to the images, but they do tell you where to find the figures in the article, so I'm keeping them.
And the ancestral connections are sex-biased:


So there you go. I'm not completely crazy.
Posted by Erik Lund at 1:18 PM