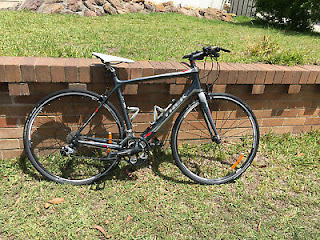 If you drive a car, that's the punchline. If you don't, I'm not sure what I can do. My instinct is that bikes are getting cheaper, although some time spent noodling around looking at historic cost of living figures isn't exactly confirming that. The idea here is that, while the machine tool industry has lower employment than in  1949, it's just about as big as it ever was. It's just a bit irrelevant, because making things isn't such a big deal any more. 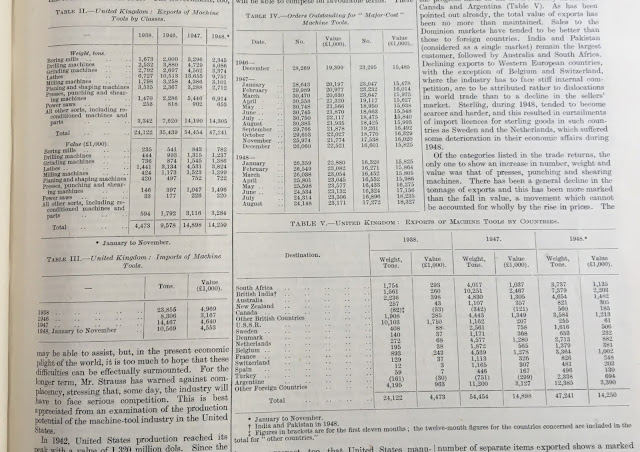 So here's the story of machine tool production and export through 1949. If you need reminding, Engineering is deeply concerned that not nearly enough machine tools are going to British industry to maintain production in the long run, and there is a case to be made that the "industrial malaise" of the 1970s is the ultimate consequence of this.

There's also a productivity story. Engineering makes a point of slightly reduced export weight and increased value, and turns to the full text of the Census of Production for an explanation. Noting reduced exports in the "captstan lathe" and"turret lathe" categories, and increased exports in "automatic lathes," it concludes that British producers are guiding export markets towards buying the kind of machine tools that are wanted in the next generation of British manufacturing. As we'll see in a bit more detail below, "automation" is reducing the demand for British machinists.

I am also struck by the  contrast with one of Elliott Janeway's later business columns in Fortune, in which he suggested that American machine tool exports suffered because they tended to have too many gadgets and doo-dads that probably weren't very useful and that foreigners would just break with their grubby monkey paws. Rather than have you squinting in frustration at the text in the lower left of the image that I didn't clip, I'll recap from two weeks back and remind you that American machine tool production peaked at a value of 1.3 billion dollars, and that due to the depressing effect of war surplus sales, production has fallen to $300 million in the postwar years of 1946 and 1947. Exports have supported the industry strongly, with Russia as America's best customer.

Janeway, who can't be bothered to do the research,write against the conventional wisdom, or understand how developing underdevelopment works, seems to assume that American machine tool exports are going to Latin America. Perhaps I am being harsh with the man, but the easy upward failure of the clan grates on me almost as much as that of the Drapers. (At least the current generation of Janeways seem to be trying. The Drapers keep getting richer by giving money to Uber.)

The other story here is A. H. Orcutt's fretful letter about the regrettable consequences of buying special-purpose surplus machine tools for other applications. Often, he says, his Gear Grinding Company is unable to adapt the equipment at all, and the money is wasted. In others, the new equipment does a poor job. Are British factories re-equipping with the wrong tools for the job? the question gives a point to my speculation about industrial malaise. It is a weighty question for a blog post, but at least I can provide some context.

For the 6 March 1942 (pp. 199--202) issue of The Engineer, editorial visited an unspecified Rolls Royce works, presumably Crewe or Glasgow, where the Merlin XX was under production. (Remember that you can access these yourselves at Grace's Guide.) 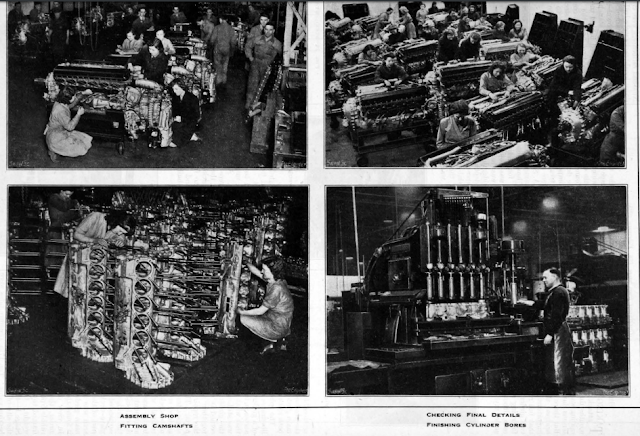 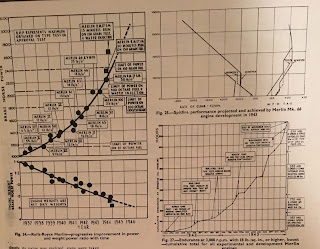 There's quite a lot to learn here. The Merlin's performance has been improving rapidly over the lat three years, and will continue to do so. You've heard all the statistics of a doubling of engine power, rising operating altitude and so on. The improved maintenance record is less often commented upon, but real as well.
We don't get quite as much information about how our performance toast is buttered, but Aircraft Engineering for July 1946 has some nice sketches: 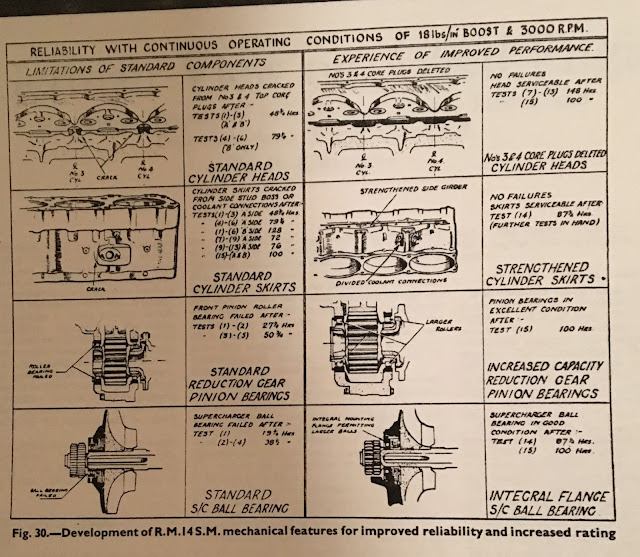 The visually obvious details involve more complicated machining. Behind them are metallurgical improvements that mean more work for the cutting edge.

To do this work, The Engineer notes the use of batteries of conventional capstan lathes, drilling, grinding and thread grinding machines, "practically all of which were being operated by female labour." Female! At a valve guide section, "a battery of five machines was tooled up for the desired operations on the machining of a particular component and was operated by one person." At one dispersal station, no less than 100 female operators were performing a similar operation with only one male inspector and a foreman.

Once these preliminary operations were seen, the cylinder liner section was visited. here, three Bullard boring mills were arranged so that two did the rough machining, and the finishing cut prior to grinding was done on a third. Moving on to the camshaft section, the staff saw rifle boring machines drilling the hole through the hollow camshafts, and a cam forming machine, guided by a master cam at the rear of the machine, and a special cam grinder, designed by Rolls-Royce, which grinds six cams at once.

In the section devoted to machining the superchargers and wheel casings, The Engineer sa Heald "Boromatics," Cincinati "Hydrotels," and Natco multi-spindle drilling machines, originally made for French firms, but transferred to British and adapted to specialised work by Rolls Royce. One assumes that these were part of the outstanding French orders under the 1939 war assistance loan, taken over by the British after the armistice. One Hydrotel had a hand operated tracer attachment "which forms simultaneously the six combustion chambers in the cylinder block." Cylinder boring is done by an Asquith boring mill, which does the six bores at the same time. A three-spindled Boromatic has replaced four machines "of the ordinary type." And while the number of machining operations required to finish a cylinder has been reduced by these means, it still takes 140, all of which are now being done at the dispersal centre.

Connecting rods are the same story, and here a Cincinnati broaching machine with a "long, rack-like cutter" was seen. Crankshafts are machined by Ambrose Shardlow vertical machines, Cincinnati profiling machines and Landis grinders. The gear shop seems to have depended on the skill of their (female) operators rather than special equipment, but an Orcutt gear grinder was seen. In the test shop, a Breviskop hardness tester and Avery tensile testing was seen. A Heenan-Froude dyanometer was seen in the engine testhouse.

Apart from The Engineer's endless surprise at the number of women, and the skill and responsiblity they show, the most interesting thing about this article is all of the brand-name checking, which gives us a pretty good idea of what kind of war surplus was up for grabs when the "dispersal centre" was declared surplus to requirements.
Boromatics are presumably someone's trademark, but even as far back as 1943, Popular Mechanics doesn't bother to name the company, although it does explain that the Boromatic is used in shellmaking, and does boring, machining, and reaming in three separate operations on the same cradle, which is more efficient, and reduces rejections caused by damage incurred while transferring working pieces from one cradle to the other. 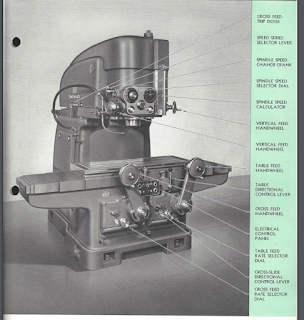 The Cincinnati Machine Tool Company's Hydrotel vertical milling machine is a bit better known. Here's a pdf of a 1946 manual, hosted at vintagemachinery.com. It is a hydraulic milling machine, optionally equipped with either a plane or 360 degree tracer and automatic depth control. Power supply is electrical, with a pump motor in each machine. That seems a bit wasteful, but with stability such an important issue, it serves the tool well to be fairly heavy in operation, and the reservoir helps keep oil temperature down. The company can also supply die-sinking equipment at an extra charge.
Here's a Natco multiple spindle drilling machine on Youtube.

I know that it's not very dramatic, but that's how your high performance aero-engine sausage gets stuffed. This one, a 1958 model available at a GM Mexico yard sale (I think you'd probably expect to pay around thirty grand), looks a bit more dieselpunk: 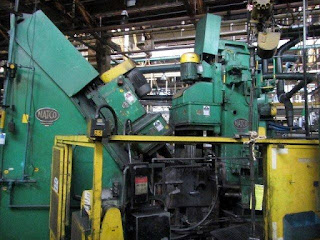 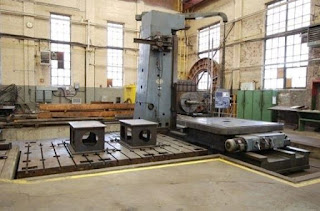 Ambrose Shardlow was taken over by GKN in 1963, per Graces Guide. In 1940, the company employed 450 people to make 200,000 crankshafts annually, and was at 1800 employees on the eve of the takeover. I assume that its machine tool line was a side project of its toolroom. A search for company-made machine tools didn't turn up much, but I'd be remiss not to link you to this fascinating video of the "manufacture, building and working of the largest counterblow hammer in England," which was used in crankshaft manufacture at Fielding and Pratt, an old Yorkshire firm. Since Google led me to it, I assume that there's some Ambrose Shardlow equipment mentioned in a tag or whatnot, but I haven't unlimited time to investigate. 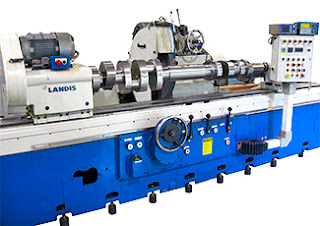 Landis Grinders survive as part of the GCH Tool Group. Here's a picture of a shiny modern piece from the sales website, if you haven't the time to click over. Since grinding equipment is what Mr. Orcutt is particularly concerned about, and because a web search isn't turning anything up about Mr. Orcutt other than his many patents, I went looking for Rolls-Royce cam grinders, but came up dry. It looks as though the company prefers to buy its grnders, and Shadbolt comes up at the top of the Google list, evidently proud of its relationship with the engine builder. That perhaps doesn't apply as much to the extraordinary machine that was the mid war Merlin
but it is perhaps worth looking into further. Cams are the computing elements on the old mechanical computers, and also the most complicated pieces to machine with profile tracers, due to the rapidly changing curvatures. They point us in the direction of CNC, and one of the (many, many, many) automation-related employment panics of our past, the one that gave rise to Vonnegut's Player Piano. That said, damned if I can share anything more than anecdotes about the British United Shoe Manufacturing Company producing the tools that cut the turbine blades for first generation jet engines, on account of having good working knowledge of the geometry of complex curves.

And that, however anticlimactically, is that. We don't know where the machine tools from the "dispersal centre" ended up, but we do know that the tools at Rolls Royce Crewe went directly to work on
So very, very pretty. . . The Wiki article says that the weakness of these beautiful machines was the "inferior steel forced on them by the government's postwar controls." I'm a little cheesed that "controls" take the rap for the export-or-die imperative, but at the same time, pleased to see support for the blue sky hypothesis that Cripps' inflation-busting investment limits had consequences. Ultimately, Bentley was cut loose from Rolls Royce ownership after the company collapsed over the RB211. After struggling through the 1970s, the company was taken over by Vickers and then passed to Volkswagen. In that respect, it is a repeat of the motorcycle story, in which a collapse in the British ability to make things, no doubt caused by the Beatles, long hair and marijuana, was followed by a 1980s revival, carried along on Rick Astley's might shoulders.
You haven't seen grooving 'till you've seen Maggie Thatcher do the (privatised) locomotion.