Aviation Week asks for a thorough test flight program, carried out by "neutral" observers, and asks that any decisions be put off until those tests are completed. Not to recycle last week's material, but that's not going to happen. USS United States will be cancelled on 23 April 1949, after the Navy admitted that the five ship program and associated bombers would cost at least $150 million, more than ten times the price per bomb of the B-36 programme. John L. Sullivan, American Secretary of the Navy, would resign on the evening of 2 May and explain his reasons in a letter to Louis Johnson, and the press, released the next day, by which time a threat to the Marine Corps had surfaced, and Carl Vinson was on the floor. "The B-36 Controversy" was over, and the "Revolt of the Admirals" had begun. 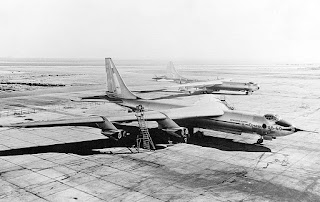 The intention, here is to dive into the month when it is the B-36 is the issue, not the United States. The swept-wing, all-jet B-36 is not a fantasy, it turns out. The Convair YB-60  prototype will roll out on a fairly creditable 18 April 1952, so it would probably have beat the United States into service, but  the B-52 was clearly the better bet.

The Navy's case against the B-36 was that even at its jet-powered maximum sprint speed and altitude of 435mph at 43,000ft, the B-26 was hopelessly vulnerable. The classic description of the B-36 says that the MiG-15 rendered it obsolete, and part of the Navy's case against it was that its best current interceptor, the McDonnell F2H Banshee, could intercept it easily.

This is true as far as headline numbers go, but the story is actually more nuanced. At these speeds, and at high altitudes where these early jets had very poor turning radii, a firing solution was much harder to achieve. Bringing a fighter to a viable firing solution meant highly favourable energetics and radar control both from the ground and the plane itself (marking the moment when even a single seat day fighter came to need some kind of radar). It was not even clear that a typical gun armament could obtain a kill in a typical passage at arms. Thus, while 360mph  at 38,000ft was dead meat, 435mph at 43,000ft was very hard to kill, and 500mph at 50,000ft was effectively immune to existing countermeasures. (See, I have been able to start getting on top of Friedman, already. Hurrah for vacation weeks!)

This brings me back to Britain. The question before Parliament is not as clear as it might be. While I was over at the Amazon Kindle store spending money, I thought I'd splurge on the first volume of the new official history of the British strategic deterrent by Matthew Jones.* The "official" British target of delivering one-third of the atom bombs needed to destroy 200 Russian cities and other strategic targets, requiring a stockpile of some 300 bombs and, it was eventually calculated, 240 "medium bombers of the 100,000lb class," as Flight is so archly putting it so as to be safe from accusations of leaking confidential information, has not been shared with Parliament. Parliament does, however, know that these "medium bombers of the 100,000lbs class" are coming; and, as well, the "interim twin-engined bomber" that we are to compare with the American B-45. It has also been told that Parliament did not order either an interim jet bomber or a next-generation prop bomber at the end of WWII.

All of this is true, and it all forms the background of the seemingly inevitable decision to take delivery of some B-29s next year --still well before the outbreak of the Korean War, note. It does not tell the whole story, however. Although it might seem that what would become the V-bomber programme has been proceeding smoothly since it was basically announced in Flight before the end of the last war, in fact the official operational requirement had only been promulgated in January of 1947, after an earlier requirement for a global bomber was nixed on the grounds that it would require too much runway. (Speaking of imminent news stories, June will see the publication of the book that dubbed a future Britain, "Airstrip One." Speaking of technological appendices, note those colossal chunks of pre-stressed concrete suitable for keeping very large aircraft from sinking into the British mud.)

The call for proposals went out in April, and invitations to tender went out to Avro in November of 1947, and to Handley Page in December. All good so far, but as fan of high dieselpunk will notice, the Vulcan and Victor have two stablemates. The first of the lesser two, the impossibly ugly Sperrin, was ordered at the same time as the ambitious Avro and Handley Page designs as a "conservative failsafe." Apart from any concerns that might have been raised by the British taxpayer (not invited), or the British rentier (who, I am increasingly beginning to suspect, has the real last word), this all makes sense.

But now it gets more complicated. The other "conservative" design, the Vickers Valiant, already well known around here, wasn't ordered until much later. In fact, production contracts for two prototypes of the Valiant were issued at the same time as the Sperrin --in February 1949. Now, more or less, by the blog's seventy-years-ago-going-on-seventy-one conceit. The Valiant's first prototype will fly in May of 1951, marking, at last, something in this story that comes after the Korean War. and ahead of the original "failsafe," the Sperrin, by several months. It was the Canberra, on the one  hand, and British atomic weaponeers, on the other, who saved the RAF from the humiliation and impracticality of continued operation of the B-29, but on this timing, the Valiant looks at least something like the "interim" bomber that the Government told Parliament was impractical and too late.

Is this the whole story? As it happens, no. B.35/46, the specification that drew out the Vulcan and Victor, attracted a late tender on 27 May 1948: The DH111 Comet Bomber. De Havilland was already working on a photo reconnaissance version of the Comet, probably inspired by the atom bomb programme's concern that it lacked the reconnaissance information it needed for strategic bombing. (I guess Russian cities are migratory?) With an extended nose for the H2S IX bombing aid that didn't complete in time for the Canberra, and a projected range of 5400km, it sounds impressive enough. The Air Ministry didn't get around to rejecting it until after Farnborough, on 22 October 1948.

This is evidently pretty small beans by the standards of the big picture story of the evolution of the strategic deterrence, but it sure looks like a lost opportunity to get a true "interim" atomic bomber in the air. It seems likely that it was scuttled by the higher British priority of spamming the world's airlines with Comets and Apollos and Britannias and thereby putting high technology to work in recapturing the industrial high ground from the Americans. Or, at least, stopping the dollar drain. But just because de Havilland couldn't do it doesn't mean that no-one could. For one thing, there's not even any guarantee at this point that flying wings like the Vulcan will even work, and Avro doesn't have anything else on its place if the experimental flying wings don't work out. 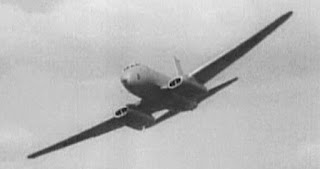 So now I'm wondering about this little curiosity. The Sperrin has been described as little more than a Lancaster with jets: The thing is, though, that plane already existed, in the form of the "Nene Tudor," as Flight refers to it, or the Avro Ashton, as it is known to posterity. Or, no, edit that. The Ashton programme of 6-re-engined Tudors comes next year, on the basis of the Nene Tudor. It's obviously not in any way a jet bomber, but its performance is comparable to the B-36, not that that's anything to write home about. And if the Sperrin was worth doing, I'm not seeing why not . . .

Well, I guess the real answer is that Britain wouldn't need it until it actually had some atom bombs to drop, and that's not coming until late 1952? Or perhaps the change in government will play a role. I don't know. As I keep on saying in these, we'll have to keep our eyes out for the half that's never been told.

Whether or not there was any moment when an Avro Tudor-based jet bomber was on anyone's  mind, we now have some clarity about why "500mph at 50,000ft" is so important, even after the appearance of the jet fighter, and why the aerodynamics (and engining) of the V-bombers were so daring. It becomes all the more important to note, then, that they were also successful, and that even the much larger American economy had trouble delivering successful bombers. To all appearances, then, seizing the technological high ground worked. The V-bomber programme, taken as a whole, merits comparison with the American strategic bomber programmes to a much greater extent than I had realised. It is even more astonishing to see that it is the Americans, and not the British, who are being baffled by a shortage of money. $15.9 billion is obviously a great deal more than the £815 million to which Cripps is trying to hold the defence estimates at the onset of the devaluation crisis in the summer, but it is also not that far off the framework envisaged by the original planners of the British strategic deterrence, who thought that Britain should drop a third of the bombs because that was its fair share.

The question, then, is how "one third" slips to a fifth, or a sixth, or whatever it is by this point. Because, on the face of it, seizing the technological high ground is not what works. And if it is all due to the dollar drain, Corn Law Repeal starts looking like a really, really bad move.

*I think I may have succeeded in using the Routledge store once, but I remember it as a highly discouraging process. Sorry about my surrender to global monopoly capitalism, but this online stuff is too complicated for me.