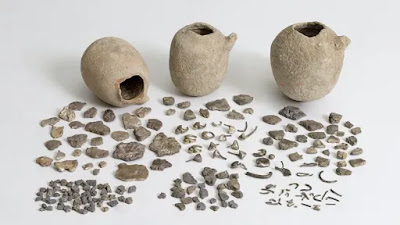 At this point, the dilettante in me calls time out for a technical break. The general expectation amongst consumers of archaeological research is that, given all of these metal pieces, some kind of metallurgical analysis will trace origins and map ancient trade routes. The archaeological literature has been frustratingly vague about this.

It turns out that there may be a bit of a dirty laundry issue going on. In 1975, a physicist named Noel Gale (Torygraph link) began measuring ratios of lead isotopes in samples in an attempt to trace them back to specific ore bodies. Dr. Gale's work was eventually formalised as the OXALID database, maintained by the Oxford Isotrace Laboratory, directed by Gale's ex-wife, Zofia Stos-Gale. Unfortunately, "some believe . . . the entire basis of the analysis is deeply flawed and not to be relied upon in any circumstances," in Sarah Murray's pungent words. Erez Ben-Yosef, taking criticisms into account, provides a methodological defence of the work cited above, here. (Which is where, confusingly enough, I arrived on the scene to begin with.)

So much, then, for silver sources. The focus here is on lacustrine resources and the emergence of the Roman, Carthaginian, Massilian, and, I suppose, Syracusan states. None of these western Mediterranean great-powers-to-be are associated with the "quest for metals," although Rome is at the southern border of Etruria. Rome is also the only one of these lagoon states not identifying as an eastern Mediterranean colony. (Syracuse of Corinth and Tenea; Massilia of Phocaea, Carthage of Tyre). It is also the best situated of the four:

Carthage and Massilia, on the other hand, are interesting for being doors through which Semitic languages and literacy could interact with anomalously geographically widespread language families: Indo-European and Afro-Asiatic. It is the modest proposal around here that these are anomalies that need explaining. I have before me an extended discussion of the European case by Alex Mullen, Southern Gaul and the Mediterranean: Multilingualism and Multiple Identities in the Iron Age and Roman Periods, but the inscriptional evidence of Gaullish written in Greek from the hinterlands of Marseille is of a much later period, whatever that means in terms of the use of multiple literacies to define identity. Perhaps sensing that the subject is going to be arcane to most of us, Alex Falileyev's review (pdf) is long and careful. Drawing conclusions would be crass, but if they're there to be had, Massilia's Greek connections are later and more tenuous than the traditional historiography supposes, with the original Massilian settlement more "Mediterranean" in character. As I've a whole host of archaeological work I'm not going to cite in pursuit of this thesis (and Tamar Hodos, who says the same), I'm probably safe in summarising the general trend as "post-colonial." Insofar as we are to look beyond the site for the origins of the later city states, these are private plantations that became states, not extensions of pre-existing Greek states.

Indeed, Sarah Murray's work, well worth some consideration by economic historians still in the thrall of Ian Morris' synthesis of Snodgrass. And, yes, that's a dig at the Berkeley school and Walter Scheidel in particular, of whom I would have expected better. (Murray, interestingly, did her thesis at Stanford, completing in 2013, and is curently teaching at University of Nebraska Lincoln, which ought to give her some credible insight into the collapse of complex societies.) I do not find a review of Murray in the wild, which is even more of a pain considering that UBC has only collected an etext, and you can't take etexts out. (Progress my right butt cheek.) I think I can export citations or some such, or even blog from campus if I could just kick an undergrad off a terminal, fat chance of that in the fall semester.

Oh, well, there's always photographic screen caps. Murray believes in the Mycenaean collapse and subsequent depopulation event, which latter I find less persuasive, preferring to believe in a population continuity that leaves less of a trace. On the other hand, she several times expresses doubts about the usual interpretation of the Mycenaean flourishing as a "palace economy," without proposing an alternative. It's just skepticism based on the sheer number of palace sites in the Argolid, and that's the kind of cranky contrarianism I can get behind. However, for Murray, the subequent period is one of prolonged economic depression, rather than the collapse of trade. 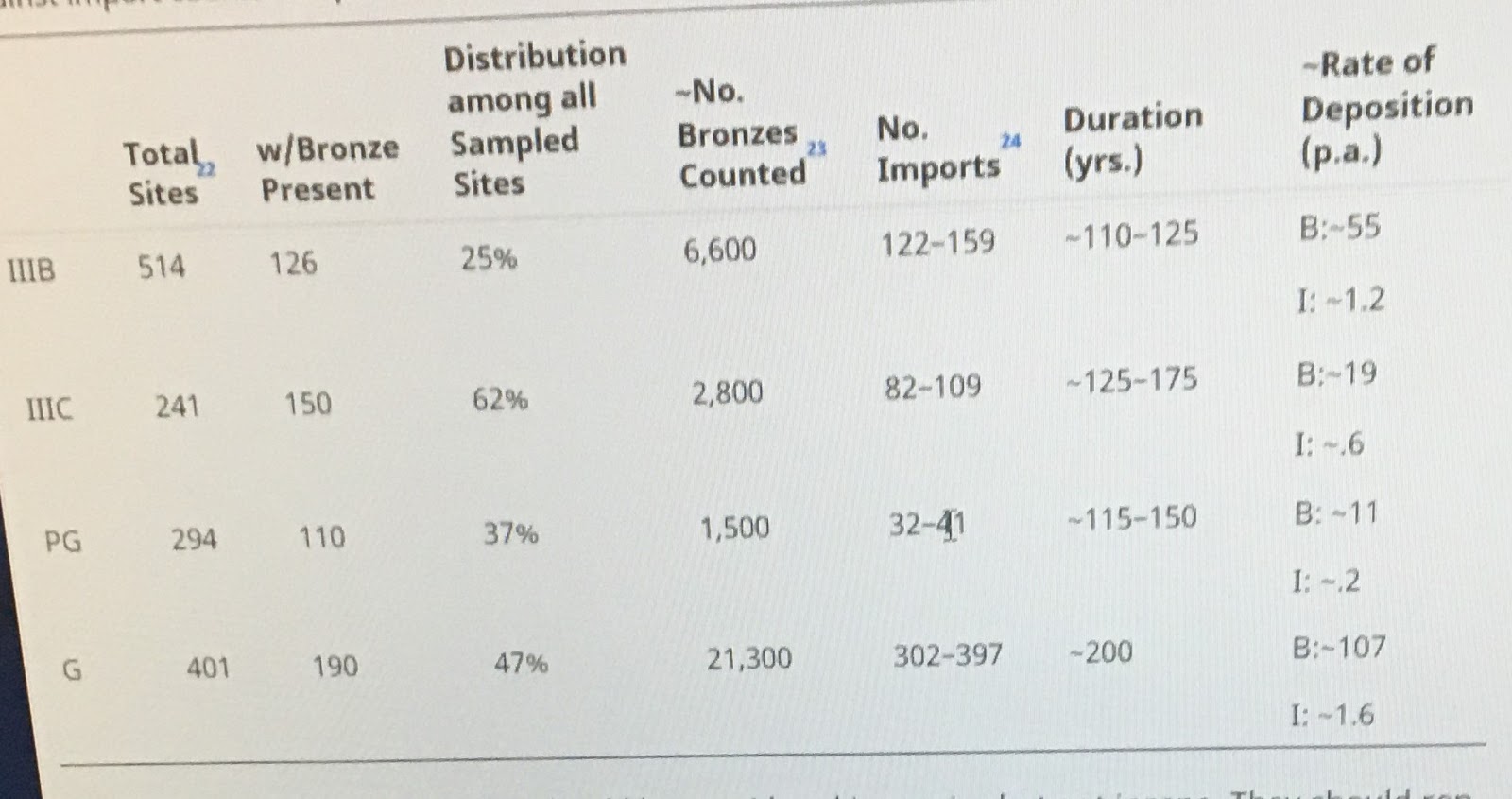 Screen caps for everybody! "G" is for the Geometric Period, c. 900--700BC and quite clearly marks the end of Murray's depression, when "ships laden with large amounts of copper and tin were not regularly landing in Greece," once all caveats are caveated. Some of the caveats must have been pretty fierce, given that Murray preemptively defends this table as not "insane." I am right now imagining her demolishing Josiah Ober in a symposium and feeling all warm and fuzzy. One could wish for a similar body of data for silver, but what we do not have, we do not have.

In the conventional narrative, statebuilding comes towards at the end of the Geometric, which, Murray points out, conveniently erases the "Orientalising" period from the history of Greek civilisation. Never mind Phoenician influence in Languedoc, what about Euboea!?

To return to the west, Fulminante's exploration of Rome's urbanisation is more controversial than she allows, but seems buttressed by parallel work in Etruria, which shows the very rapid agglomeration of previously scattered villages into incipient urban sites on natural plateaux of volcanic tuff with the necessary c. 100--150 hectares of available settlement territory and adjacent to major waterways. This change seems both abrupt and planned, and is accompanied by incipient monumentalisation. Fulminante briefly throws the idea of heterarchy into the mix, and certainly anyone trying to understand the multiplicity of Roman cult festivals after reading Byers on Cahokia is going to be hard pressed not to think in terms of a "shopping mall" of cult, but Fulminante's mall has only one tenant, which isn't very heterarchical at all. That is, the new, proto-urban sites have a banquet hall in the centre. In the Roman case, the legendary House of the Kings, subsequently built over by the earliest Vestal shrine.  Again, although Fulminante takes an evolutionist stance at the end of the day and traces the origins of the development back into the Middle Bronze Ages, the key stage of Roman urbanisation is immediately after 750BC.

The "banquet hall" is my simplification. Throughout the western Mediterranean, we find evidence of utensils associated with the symposium, in its original form of a ritual banquet in the presence of the dead. However, in no case do we find the full panoply and an argument for the direct transmission of the symposium. (Confucius would be appalled!) Whether or not this means that wine was being exported from the eastern basin to the western, we do have finds of grape pips and olive pits from Early Iron Age contexts, strongly suggesting that the characteristic eastern mixed agriculture spread to the western basin in this period.

As far as the more profound causes of this incipient urbanisation, Fulminante's work is rooted in landscape archaeology and theoretically informed by John Bintliff and the Copenhagen Polis project. It might be a bit reductionist, but once you have a site with access out to five miles around the centre and an elite that shifts from exogamous to endogamous marriage patterns to maintain control over the land, a two-tier settlement structure is inevitable, face-to-face peer interactions have to be replaced by something a bit more institutional, and a proto-state emerges. I would personally like to see this developed from geographical determinism into a land-use argument, and Fulminante points the way by linking the developments to the spread of underground irrigation/drainage tunnels cut through the Latin tuff.

So there you go. If we can trust lead isotope analysis, the silver trade began in the mid-800s, and state formation, endogenously, in the mid-800s as the economy, at least in the Aegean basin, demonstrably improved. As to the cause of the improvement, we don't need to talk about coins yet because it looks as though land use is being dramatically transformed, not that this is surprising, Iron Age and all. Water management is sufficient in itself as a cause of social change, inasmuch as it greatly increases potential crop yields, and as if that weren't enough, we have the still-preliminary (no pollen evidence yet!) case for the emergence of arboriculture.

That leaves horses and horsemanship, given that a good rider is probably a more important agricultural export than the animal itself. . I almost found an excuse to discuss Ian Armit's actual thesis in Headhunting and the Body in Iron Age Europe here, but what really struck me is all the horse-y equestrian art associated with headhunting in seventh century Languedoc. Artefacts of the 600s are not an argument for changes of the 700. So I'm still waiting on evidence that horseraising is in any way important to all of this, and an even more speculative link with the neo-Assyrian and Saite wars back in the Levant, but there you go.
Posted by Erik Lund at 3:28 PM