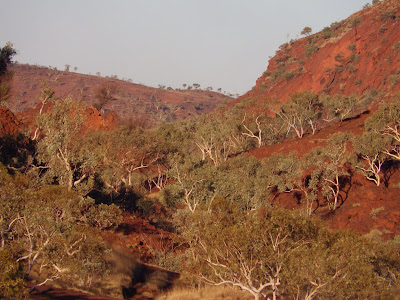 At the risk of gross generalisation about the politics of other anglophone countries, Labour has found itself better served by being a to bit wet about nuclear, treating the British deterrent as something that Britain more-or-less fell into and can't quite get out of, while the long run of Liberal-County government has more-or-less allowed Australian national politics to close the books on its brief, nuclear past. Things get a bit stickier when we root HURRICANE in its geographic specificity of the Pilbara region: 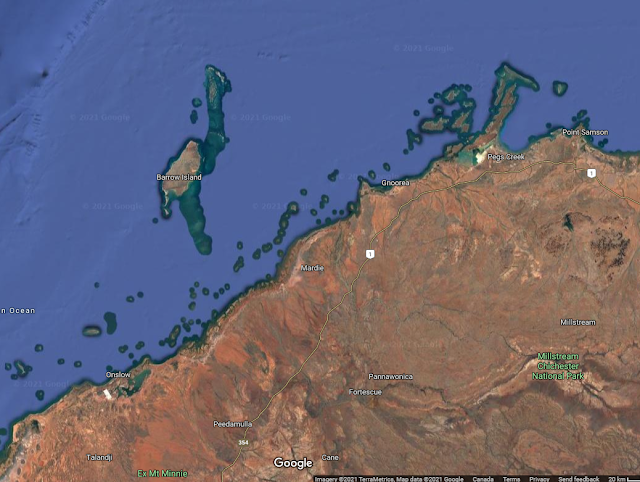 The Montebellos are that tiny archipelago off the north shore of Barrow Island, an unoccupied island of 200 square kilometers, best, if meagerly historically known as a whaling station that gradually transitioned into a slaving port supporting the local pearl fishery with captured Australian aborigines until the arrest and expulsion of Francis Cadell. HURRICANE, and the region, was supported from the port town (barely) of Onslow, and the expedition drew water from the mouth of the Fortescue River. It is not just accidentally located in the Pilbara, the barely-populated (62,000 estimated) and remote region that underpins Australia's modern prosperity by exporting up to 324 million tons of iron ore a year in the years from the initial discovery of iron at Whaleback Mountain in 1963. Dry, isolated, underpopulated, with a dark history of exploitation of the Aboriginal population, with an industry that goes far to explain Australia's vaunted "no recession in thirty years" economic history without actually employing many Australians at all. It's very . . . Australian.

When I say that iron was discovered in the Pilbara, it should be clear just from the picture at the top of this post that this is a silly thing to say. That rust-red soil and rock didn't come out of nowhere! Wikipedia says that the Ophthalmia Range  was first sighted by Francis Thomas Gregory in 1861, and that he noted the obvious iron deposits of the range, but it was named by Ernest Giles during his 1876 expedition. Temporarily blind at the time, he and his assistant, Alex Ross, found his medical condition a great deal more interesting than some dusty hills in an arid, albeit sometimes cyclone-lashed, land.

Onslow, HURRICANE's base point, was established as a port to serve some local sheep stations. In the earliest days of the industry, such as it is, itinerant herders ended up migrating south along the coast to escape arid conditions and  ending up in the general area. This perhaps explains why Onslow was set up where it was, as the port eventually proved impractical and the entire settlement was moved. This happened long before the tests. All I am really suggesting is that the Pilbara is not a region that anyone historically took very seriously with the exception of the Aboriginal inhabitants. 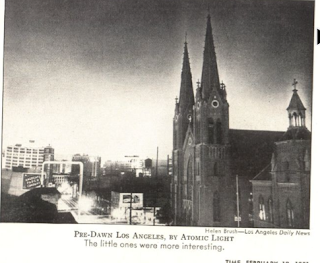 Perhaps the first serious visitors, then, were the RN and RAN surveyors looking for an isolated, unpopulated area with prevailing winds that would carry fallout away from a reasonably convenient basing point. On the other hand, "serious" may be overselling this part of the story, too. The British had already rejected the Port Churchill area as a test site, but were still negotiating with the Americans for the use of Frenchman Flat.

So this is probably a good opportunity to highlight this photograph from Time that I had to pass by without comment in postblogging. That, right there? That's the atomic flash from Frenchman Flat illuminating the predawn streets of Los Fucking Angeles, California! I know that sometimes it seems like Fifties people were pretty blase about this stuff, but they wouldn't have been testing snow water for fallout residue in Binghamton, New York if people weren't worried about this stuff. I can see why the AEC wouldn't have been entirely keen on testing a British bomb at Frenchman Flat. What I can't quite wrap my head around is the British government wanting to do it. I mean, they did. It's in the official records. I guess we have to mark it down to the ongoing British effort to engage with the Americans on nuclear issues. The official historians, looking back from the Olympian heights of modernity, see that ineradicable British enthusiasm for mooching off the American nuclear programme. I have to wonder if London was more concerned than it pretended about American talk about using the bomb. (Just as we perhaps should take more seriously the idea that Mountbatten favoured Polaris as a first strike weapon.)

I'm not going to make the Attlee government out as some kind of lone voice of reason in the fervent Fifties, but it is time to look at what a "Labour bomb" means. The problem is that the first British atomic bomb was so boring. There's not much to say. William Penney's approach to the bomb compartmentalised design for security purposes, with only five or six figures at Halstead grasping the whole of it, and none of them talked. I've previously linked to Jonathan Aylen's First Waltz: The Design and Deployment of Blue Danube, Britain's First Atomic Bomb, a 2014 article in the International Journal of the History of Engineering and Technology that insists on a site-rooted and task-specific history of the way that Blue Danube came together. The same can be said of its Montebello ancestor, but with an even smaller circle working on an even more basic mechanism, it seems like there's not much to say. Certainly no-one  has written a history of it. The interviews that must be behind the documentary above are as close as we might now be able to come.

So let's dive in! 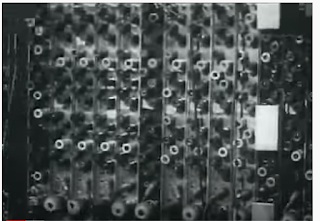 A key aspect of making the Halstead design process work was major labour savings compared with the Manhattan Project, particularly of scientific and technical workers. The documentary tells us about the abstruse calculations required to work out the critical mass of the bomb, although not the equally laborious calculations behind the explosive lenses that compressed the core into that critical mass. It does, however, tell us that an "electronic brain" saved a lot of that labour. 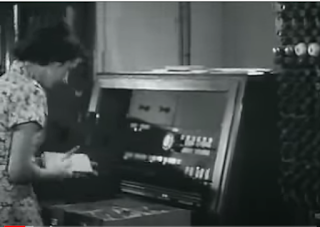 Punch cards! Unfortunately, Old Labour isn't woke enough to notice the key role of an employee of the female persuasion. Simon Lavington tells us that "Fort Halstead in Kent was the first defence establishment to become interested in acquiring a computer, primarily because the UK’s early research into nuclear weapons was carried out there," but then launches into the history of AMOS, the Ferranti Mk I* delivered to Halstead in 1954. This is clearly not that, and a hardware buff might recognise it. For now, all that I can report is that the Montebello bomb was developed with an "electronic brain." 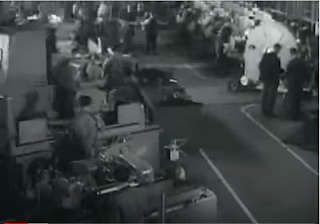 The next problem is the prevision machining of the bomb. The narrator says that the bomb, and all of the scientific instruments used in the test, were made in "British workshops by British workmen." I didn't really doubt that, and I have no idea if this toolroom floor has anything to do with Halstead other than being in the documentary, but it is nice to see all that precision equipment so abstrusely described in the pages of Engineering, at work.

I can't quite get the precise moment that Bald Engineering Operative Guy looks through the ocular, but, look, precision: 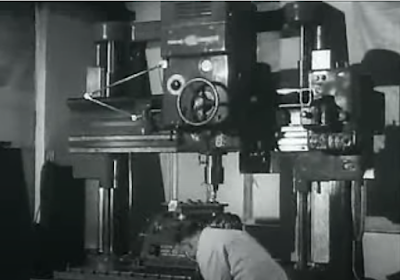 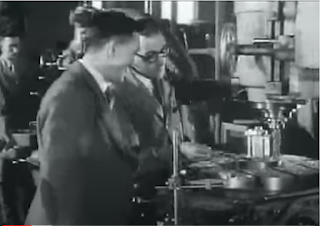 On the other hand it is pretty clear that this is a Halstead lab, as the narrator describes the design and construction of a high speed camera in some detail, probably because it is a bit of gee whiz technology that isn't classified, and they can show you that classic image of the better-dressed supervising guy butting in to see how things are going. 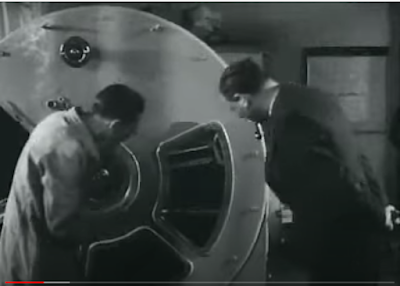 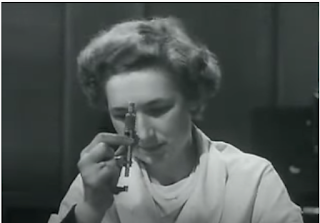 Still not quite a classless society, I see. "In design, this camera was entirely British, and design became reality in the hands of fine craftsmen."

I've left a brief discussion of the firing harness aside, because with this we've pretty much exhausted what the documentary has to say about Halstead. It is off to the Montebellos to trace their transformation from a "wasteland of salt bush and spinifex" into an appropriately instrumented site for a high technology demonstration. More than twenty minutes will be spent on this transformation, and the collision of a HMS Campania's "cargo of boffins" with an RAAF airfield construction squadron in the far Outback.

It seems, very briefly in the first eight minutes of the documentary, that we might have a through line of craft skill and science substitution for the brute force of the Manhattan Project. It is a version of the story that we are largely denied by the secrecy as a whole, but it is clearly not just me hallucinating it, since Aylen makes the same point.

The temptation here, which is very present in the official historians, is to see the bomb manufacturing complex as a black box producing an atomic instrumentality that exists to enable debates over policy and delivery vehicles. Going forward into the high Cold War, when an unlimited number of reliable bombs are taken for granted, that may be fair. But it is clearly not what the Labour deterrent is about. The existence of a British bomb was by no means a forgone conclusion. It could easily not have happened. Nor was the effort to create it without consequences, even outside nuclear industry.

I say that boldly, without much of a sense of what those consequences were. All that I can say, in the moment, in February of 1951, is that again, it matters that it is still a  Labour project. 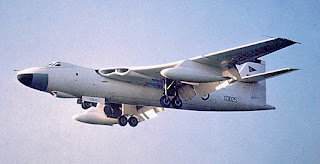