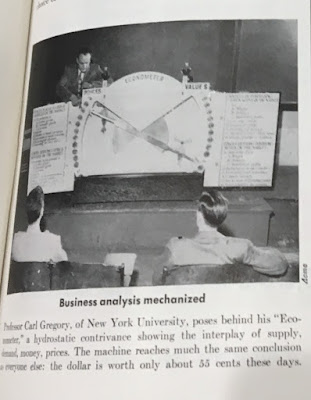 The idea of a hydraulic computer for modelling macroeconomics is not news. I talked about the connection between progress in hydraulic power and early computing in a very early post, and I've long had an idea that there were early hydraulic computers, because, in fact, there were, and they're on display here and there.


Chris Bissell, a regular at the IEEE Annals of Computing, had a 2007 article about the MONIAC hydraulic computer at the Science Museum in London, to which I link mostly to have something other than Wikipedia up. It turns out that it was built by Bill Phillips, which I honestly didn't know, or at least didn't remember, when I was putting the reference to Wittfogel in the title.

Phillips is the New Zealand-born economist behind the Phillips Curve. I swear that he has popped up around here before, although the search return is awkward and full of Joseph Phillips. It was not, it turns out, about the MONIAC hydraulic computer, which is still a year away. A big deal, MONIAC sold fourteen iterations, which is an awful lot of sales for an early computer. It was probably a bigger deal for him than the Philips Curve, which in his hands was not yet an ideological cover for the project of bringing back the reserve army of the unemployed.

So MONIAC is cool and all, but not original. I'd like to tell you where his inspiration came from, but Professor Gregory is eluding my search. He has no publication record, is tenure at New York University has long since gone down the  memory hole, and even the Ecometer is a dead end. He might have been a hack, but it would be hugely unfair to draw a conclusion in an age of sudden heart attacks, horrifying car accidents and latest-model airliners falling out of the sky. So I will put it this way. It does seem likely that Phillips and Gregory have a common inspiration, and there is one out there to do the inspiring, the water integrator.

Talk about your Wittfogelian moment! Vladimir Lukyanov's 1932 (or 1928, or 1936: apparently, with communists you don't need dates) analogue computer was an elaborate room full of water chambers and channels that was designed to calculate water levels in the new reservoirs of the Soviet Union's various grand hydroelectic/irrigation projects.and also, says the article, in the construction of the Baikal-Amur Mainline, which is a railway, and not a hydraulic project. That's probably because, by the 1970s, there were several hundred water integrators around the Soviet Union, being used to solve ugly partial differential equations. To infinity, and beyond!

A kid at MIT built one for a class project, or rather some water channel logic circuits, so you know that it's real science.

I was a bit disappointed by all of this, as I was hoping that for some grand dieselpunk machine using Admiralty oil servos, but instead I was led to Bill Horton's work with "fluidics," beginning in 1957, which was all hydraulic flow. The modern fluidics enthusiasts have vague ideas of using aerodynamic surfaces as logic gates, perhaps even using rudders and flaps for vector thrust. Too cool for school, although, ironically enough, evidently beyond the current limits of computation power. Solving those PDEs is just too much work. . .

Karl Wittfogel is, of course, the guy behind the idea that canals lead to despotism. I say "of course," because who hasn't read Larry Niven's World Out of Time? I imagine that Wittfogel himself had something to day about the Wittfogel thesis, but life's too short to read that kind of stuff. Unfortunately, it turns out that I would have to do something so dreadfully serious if I were to want to make some kind of argument that the water running through channels to model modern economies and huge hydroelectric projects have anything whatsoever to do with Wittfogel's ideas being in the air. His monograph wasn't published until 1956, and he seems to have spent the late Forties beavering away at actual Chinese history and source criticism. I'd have to read, like, his papers, which seem to be at the University of Washington, and, not unreasonably, the Hoover Institution. (Sinister as the latter  is these days, it's a fine place for Chinese history.)

This is not, as I've said, the week for hard boring of hard bores. I really need to get back to Flight.
. . . But not before I've done my look-what-I-founds.


It turns out that it took until late October for Newsweek and Time to catch up with the Neo-Malthusians, and this one comes out of Time's election issue, several pages after Kiplinger Magazine's [who knew?] ad for its special "What Will Dewey Do" issue. Since Time has restored access to its Vault, which is nice, because I'm certainly not subscribing to have piles of unread news magazines sitting around my apartment. I've got the Guardian for that, I can even follow up on the image.

Time points out that neo-Malthusianism is linked to the "similar erosion scare in the Thirties," before bulldozing on to the point that it is a rationale for colonialism. Say what you will about Henry Luce's unpleasant paleo-Republicanism: I like the cut of his anti-imperialist jib, and Time's editorial board does a fine job of following up on Vogt and Fairfield's vague ideas about agriculture. It's sad that Time has to patiently explain that  "soils are made of mineral particles mixed with organic matter and . . . living organisms," and that " . . . . [t]hese living things . . . have more influence on the character of the soil than does the rock or other material out of which the soil was formed," and that the reason that the chernozem soils of Iowa and Ukraine are so good for wheat growing is that they are suitable for a grass biome, and have been conditioned to be grasslands." Podsoils, Time goes on, form in wetter climates where dense forests normally grow, and  have acidic, leached, "tree-formed" soils that, at first, do not produce good grain crops, but that a good farmer can quickly condition the soil into productivity, as was done on the "well-kept farms of New York State, Pennsylvania and Ohio." "'Irreplaceable topsoil,' Time adds, is a punchline to agronomists, pointing out that when, in 1937, a US Agriculture Department research station stripped the full 10 inches of soil from an Ohio station, down to the yellow subsoil, it took only six years under corn to bring it back. Time goes on to point out that Pennsylvania farmers sell their excess topsoil to mushroom farmers, lest the ever deepening layer bog their equipment, I suppose.

I could go on, but it is when China comes up that Time throws the kind of fit that helps me appreciate my China missionary ancestors. Vogt tells us, because this kind of rhetoric never goes out of season, that it is too late to prevent terrible famines in China due to all the population increase, and that they are a mercy. Had General Marshall's peace mission succeeded, Vogt says, it would have been the real tragedy. Time tartly points out that the population of China probably had not increased at all in the previous decade of war. "Such super-isolationism, with hints of the old 'yellow peril,' is one of the ugliest implications of neo-Malthusianism."

Again, say what you will about the church lady ethos of the old China missionaries, anti-anti-Aisianism just might be the thin edge of the wedge that opens the door to civil rights for African Americans.

Newsweek's review is less sumptuous, perhaps because Newsweek isn't edited by a former China missionary turned Downeast gentleman farmer. It does, however, carry a letter from Vogt specifically about his objection to Greek food aid, as likely to trigger an excess of Greeks. This is presumablly a step too far even for Vogt, and he wants Newsweek to understand that just because he said it, does not mean that he meant it. It was all just some kind of jeu d'esprit.

I wouldn't return to this subject, especially in an ostensibly near-purely technical appendix were it not for the other story that caught my eye in the election number of Newsweek, which was about the British Interplanetary Society's annual meeting, at which Olaf Stapledon gave a talk on colonising the planets. The aging author of Star Maker, Last and First Men, and Odd John, amongst others, explains that Venus will probably need a whole new atmosphere, but that the colonisation of Mars might be achieved eugenically(!) The first colonists, he theorises, might be Tibetans, on account of their genetic acclimatisation to low temperatures and thin atmospheres; but, in the long run, we should definitely consider a eugenics programme to produce a perfectly adapted new race of Martians. Given the ludicrous state of Areology in the 1950s -pick up a textbook to see just how little distance had been made from the good old days of canals-- this isn't quite as crazy as it sounds, biologically speaking. It's the invocation of eugenics, three years after WWII, that gets my attention.

Rockets, eugenics, planetary exploration and "hydraulic despotism." It's a somewhat aimless mish-mash. The issue is that it is the fertile soil from which the idea of the computer is growing. That's my justification for calling this a technical appendix, anyway. The green shoots of the computer are poking forth everywhere.

Time: "Thoroughly Roman Catholic Eire has one of the lowest birth rates in the world, and its population is stable. Eire is behaving more-or-less as the Neo-Malthusians want all countries to behave. It is not industrialising (Vogt hates industrialisation), it is not greatly increasing food production. [Soil mining is bad.] But 79% of Irishmen under 30 and 60% under 40 are not married. Thirty-five percent of Irishwomen do not marry at all. "Ecologists" might call this balance; few sociologists would call it healthy."