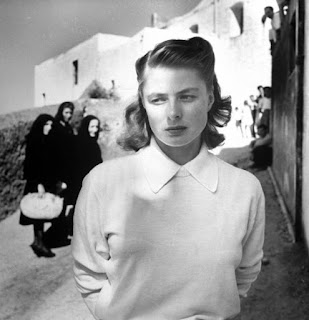 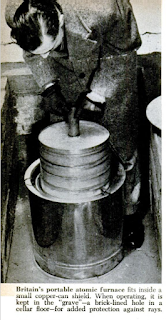 That plan stated, I can't quite confine myself to it. Googling around, I quickly found a 1 March 1950 Maclean's story by Blair Fraser that is so interesting that I'll burst if I don't share it.*  Fraser lays out Truman's goal and the technical problem as it was understood in February of 1950. "The hydrogen chain reaction, in theory a thousand times as potent as that of uranium, takes place in the sun at temperatures above 20 million degrees centigrade and pressures of 160 billion atmospheres. President Truman announced, not that we can produce these incredible conditions on earth but that the United States will now spend some money trying."

That is, although Fraser doesn't put it explicitly, nuclear fusion reactions occur when protons with sufficient kinetic energy to exceed their electrostatic repulsion collide and are joined by the nuclear attraction force to form new atomic nucleii. The difference between the nuclear binding energy of the forming protons and resulting nucleii is released as photons, the endothermic product that makes hydrogen bombs go boom.

The curve below captures the increasing energy requirements with increasing size, with the noteworthy downwards dip for some lithium isotopes and carbon-12. (Exotic isotopes that we can't possibly make with current technology might show similarly anomalous properties. The story of atomic magic might not be fully told yet!) 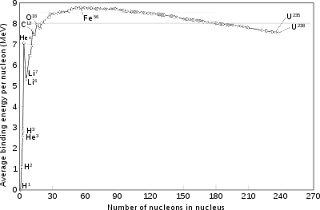 What Fraser does not clarify is that even conditions in the Sun are not sufficient to cause simple proton-proton hydrogen fusion. The threshold energy required is 1.4 MeV, compared with the Sun's core temperature, which is about a thousand times less. Fusion occurs in the Sun due to quantum tunneling. A statistically rare event, it provides enough heat to make the Sun work, but not, fortunately, enough to blow it up. All of this was known well before the war. What makes a hydrogen bomb feasible on second glance is that the energies required to fuse two heavy isotopes of hydrogen, deuterium and tritium, is much less than this. In practice, actual fusion bombs use even funkier chains of reactions in which that prominent lithium dip is exploited to the full.

I'm pretty sure that Fraser didn't know any of this, and explaining it would probably have been a violation of the McMahon Act, as, if relevant to atom bomb design, it would be deemed to be "born secret," and it would be a violation of the bill to disseminate it to uncleared individuals, however the information were derived. In fact, Fraser makes much of this in the article, underlying the extent to which its ridiculous ramifications had driven physicists out of the field in the years after the war, contributing to the "parlous" situation of the American atomic weapons stockpile in 1947, which is by now close enough to common knowledge that Newsweek issued an oblique denial this week. (That's the point of the Periscope note that General Bradley does know how many atomic bombs America has. The rumour is that he didn't, the implication being that the AEC didn't know how many would work; the reality being that, as of 1947, it was fairly sure that none would work.)

Moving on, Fraser underlines some key problems. First, the preliminary unthawing of Anglo-American nuclear relations in 1949 revealed the British centrifuge technique. Not only was this a bit of a blow to the egomaniacs now in the driving seat in the American programme, it underlined the risk that the Russians had made similar discoveries not yet suspected at Oakridge.  (As it happens, they had.) Second, security was choking the American programme to death. On the other hand, the Russians wer racing forward madly, and even the British were suspected of having grandiose ambitions:

“I think the British count on atomic energy to restore them to world leadership,” said a man from Canada’s External Affairs Department. “Britain went into eclipse once before, when she lost the American colonies. It looked like the end of the Empire. But the Industrial Revolution was just beginning, and it gave Britain power and eminence she’d never had before. Maybe the Atomic Revolution will do the same thing if Britain gets the same kind of head start.”

The "super" bomb would put America back in the lead. Way back in the summer of 1946, there was a bit of a fuss over the possible use of "cosmic rays" to "crack atoms" to create atomic power, which I interpreted then as a premature discovery of muon-catalysed fusion, a fascinating research dead end in fusion. Muons are leptons with the same spin and charge as an electron but 207 times the mass, created when high energetic cosmic ray photons collide with neutrons. Predicted by Hideki Yukawa in 1935 and observed at Caltech by J. C. Street and H. C. Stevenson in 1936, muons were expected to play  a critical role in atomic decay events. They don't, but they can be captured by nucleii, replacing electrons to form "muonic atoms." Muonic hydrogen will undergo fusion at much lower temperatures than even the deuterium-tritium fusion reaction, something that we know was predicted by Sakharov and Frank "before 1950." The broad implication that I take away from GE's initial plans to study cosmic rays at its Shenectady plant, laid out in a June 1946 Time article, is that people were already at least vaguely aware of this possibility.** I pointed to some hints that a muon-catalysed fusion bomb might have been under consideration in a February 2016 post based mainly on a Radio Digest article that it would be a pain in the ass to retrieve right now and the fact that the author, a Manhattan Project physicist, was sent to Tokyo in 1947 to "advise" MacArthur on atomic matters.

Slightly less of a journey into the crackpot dimension was Edward Teller's "Classic Super," a hydrogen bomb more conventionally made by combining fissile material with deuterium and hydrogen. In this bomb, a layer of liquid deuterium surrounded a conventional atomic bomb. Both Russian and American analysis showed that this would not work, but the Russians created a hybrid atom/hydrogen bomb known as the "wedding cake" design by surrounding the deuterium layer with a natural uranium shell, which went off with a satisfactory enough 400kt boom on 12 August 1953, but which is deemed not to be a true hydrogen bomb, but only a mere "boosted fission" weapon. It was not until January of 1951 that Stanislaw Ulam came up with a workable hydrogen bomb design, which differed from earlier concepts in separating the fission charge from a core of light elements surrounded by a heavy metal damper. Richard Rhodes is adamant that the shock of the fission discharge is propagated to the fusile warhead via a radiation pressure mechanism, while Wikipedia argues that the hydrogen, deuterium, lithium deuteride or God-knows-what is physically compressed by a tamper plate accelerated by ablation due to x-rays. Interesting enough, but the controversy takes us well past Christmas of 1949. (And to Technological Appendices of months and years to come.) 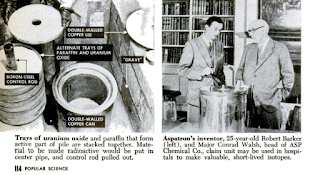 So what about Robert Barker? Walsh, and the A. S. P. Chemical Company have three patents in the US record, all more-or-less random "coming things" from the British scene (Aspatron, a method for stabilising soil, and for extracting pectin) that the good Colonel patented in the United States, presumably in hopes of licensed production there. Maybe there's a connection via the paraffin? I honestly haven't a clue how this is supposed to work. A moderated natural uranium reactor is possible --and a Canadian invention, w00t!-- but requires heavy water to contain neutron losses. I guess the copper and paraffin are supposed to fill this role in Barker's design.

Some googling eventually turned up early experiments that tried to  use alternative light atoms to moderate natural uranium piles --specifically, because it was cheap, carbon. Or --why not?-- carbon-hydrogen chains. Hence, paraffin. Ultimately, Charles Laurence's group at Ottawa used uranium oxide, sometimes mixed with coke, a neutron source, and a blocking layer of paraffin in the "moderating" role.  Barker seems to have followed the same line of thinking, undeterred by issues of plausibility.

Oh, well. I was kind of hoping for a crackpot theory about producing additional neutrons by secondary induced fusion of the hydrogen atoms in the paraffin. Unfortunately, Barker isn't theorising new nuclear reactions. He's just wrong, as are the senators pushing for a "super bomb." The "super," as envisioned in December of 1949, won't work. The real issue here might be that, before anything can be done about the super-bomb, its tritium fuel will have to be made. Tritium has a short half life and is highly radioactive. It can be made in particle accelerators, which would have been appealing to Ernest Lawrence, but is most often manufactured in reactors. Given lack of capacity in the United States (or anywhere else) in 1949, enough tritium for hydrogen bombs implied building more atomic reactors. That, in the end, might have been decisive for the senators who supported the super bomb. Whether it worked or not, it would entail a substantial increase in the scope of the American atomic programme, and also more uranium mining, of particular concern to a Rocky Mountain state senator like Johnson.

So that's what I'm going to go with. Johnson is hot for the super bomb because he doesn't give a shit whether it will work or not. It'll pay off for uranium prospects long before the bomb fizzles.