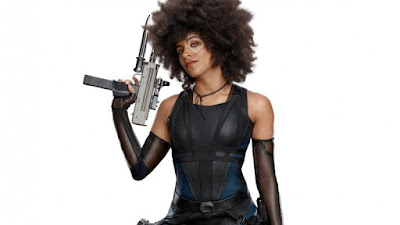 I think it's fair to say that we're all hugely disappointed that no-one has graced the Internet with a picture of an atomic six-shooter, perhaps because the "atomic hand grenade" and related jokes have already been done to death. So here's Zazie Beetz with a gun, because in the comics Domino hangs out with the Very Biggest Gun Wielder of the 90s, Cable! Cable probably has some californium rounds kicking around.
Or not. Besides the practical objections of high radioactivity, high thermal output, extreme expensiveness, short half life and excessive weight, californium isn't actually a terribly good candidate for alternative atomic explosive. Cary Sublette, here,  did  his own "one-group estimate" of the critical mass of californium-249, coming up with 5.9kg, or half that using a beryllium reflector, which would be quite heavy and so impractical in our atomic six shooter. Isotopes -251 and -252 (which shouldn't actually be fissionable by chain reaction, I thought?) have slightly smaller weights.

The one-group calculation method consistently underestimates the true critical mass - primarily because it does not take into account the effects of inelastic scattering in softening the neutron spectrum. The one-group calculated critical mass estimates are thus lower bounds on the true value. Comparison between the one-group calculations and the actual values for the highly fissile isotopes for which good experimental data is available (U-233, U-235, Pu-239, and Pu-241) shows a consistent underestimate of 70-75% of the true value. For less fissile isotopes, where critical mass estimates have been offered by others (these are mostly calculated estimates also, but with more sophisticated models), the underestimates are more severe (at worst 22-29% of the 'true' value for Pu-242). This too is to be expected because the effects of inelastic scattering is relatively greater in less fissile materials. On the other hand, the estimates for extremely fissile transuranics like californium isotopes should be quite good.

So while this doesn't pertain to the hypothetical californium bomb, there's an important takeaway here. The methods available for estimating the critical mass of fissile metals greatly underestimate the critical mass. Numerical methods corrected with experimental data are required. In other words, we lack a theoretical apparatus that can predict the performance of atomic weapons.

Uhm, wow.  So just to review what we're messing with here:


This is no exaggeration: Remember, we are dealing with the Classical Super, which is supposed to ignite a tank of deuterium with its neutron flux. The neutrons aren't directional, and there's plenty of 14N in the atmosphere. I shouldn't overstate the concern anyone might have felt about accidentally turning the Earth into a supernova. It's just that this is the latest in a series on what the Manhattan Project and hydrogen bomb proponents didn't know, which turns out to be a great deal, which makes the whole thing look just a bit more reckless in retrospect. 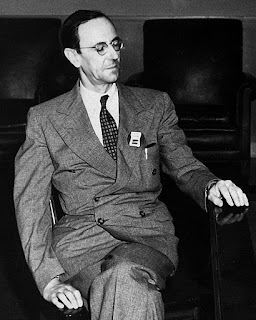 All that said, I'm focussing on fission-related issues today. I'm not concerned with the Teller-Ulam design, or the runaway explosion of Ivy Mike, with all of its revelations. Instead, let's haul back all the way to the dark ages of 1932, only thirteen years before an atom bomb destroyed Hiroshima, when James Chadwick discovered the neutron. The immediate intuition was that the neutron was an alternate state of the proton, which was upset by the discovery that the neutron is slightly heavier. I gather that the Standard Model still holds that they're the same particle with different isospins, and that the weight difference is just one of those crazy things that  happen.

Explaining how an atomic nucleus could contain protons and neutrons was another matter, and Werner Heisenberg published a model using quantum mechanics, for which generations of undergraduates have ever since praised his name.

Or something like that. Anyway, as already reviewed, the previous discovery of hydrogen fusion and subsequent discovery of atomic fission opened the path to atomic weapons over the course of the 1930s, which, as a decade, was showing its low-down and dishonest streak by simultaneously working away at a war which would see them used. (Well, not fusion. For that, we're still waiting.) Meanwhile, Enrico Fermi spent 1934 shooting neutrons at targets and making new atoms. Astrophysics and cosmology might still have no idea how the elements of the universe had been created, but nucleosynthesis was at least on the table as a substantive development of Eddington's original brainstorm. And while it might seem that nucleosynthesis wasn't enough to explain the heavy elements, it did look like more fun than a barrel full of monkeys.

The one mystery here is Enrico Fermi spending a year in a lab doing practical stuff. As it turns out, there's a reason for that. In 1933, Fermi submitted a paper to Nature, explaining beta decay (free neutrons decay into protons by giving up an electron and a still-theoretical neutrino). Nature rejected it. Humiliated, Fermi confined himself to the lab for a year while Italian and German translations wended their way through the press. Once published, it was clear that Fermi's interaction provided a reconditely mathematical way of modelling the nuclear binding energy of a given nucleus. Given an infinitely large computer, it would also be a way of calculating the shape and size of an arbitrary isotope and thus its neutron capture radius, critical mass and nuclear binding energy, but that is not a thing we can do. (It's easy enough to calculate the nuclear binding energy of an existing isotope, but we're worried here about the ones that we're making by various human interventions, including lighting off a bomb.)

Fermi's self-exile came to an end just as Hideki Yukawa published his also-quite abstruse explanation of how proton-neutron interactions were mediated by particles known as "mesons." As previously mentioned, the discovery of the muon was at first taken as confirmation of this, but it turns out that muons are a completely different kind of subatomic particle from mesons. Or maybe not --we really didn't get all of this sorted out until quark theory in the 1960s. Again, not actually knowing how these things work might be taken as an argument against igniting uncontrolled chain reactions that kept producing anywhere up to 50% more energy than expected. But what do I know? Not as much as these guys, and they really didn't know a lot.

Surprise! Anyway, thanks to all those atmospheric tests in the Fifties and whatever else they've done since (Los Alamos won't tell us!) we know what's going on now. Or some of us do. Point is, everything's good.

Picking up another dropped thread, the discovery that you could make new elements by shooting neutrons at them promptly inspired people to do it. As I said--fun! Although I should back up here, because the first and in some ways most important of these elements, protactinium, exists in nature as a decay product of U-235 and was isolated chemically in 1917/18. Sublette tells us that initial calculations implied that protactinium was a highly suitable candidate for atomic material, and notes that work went on in the early 1940s. He also points us to the United Kingdom Atomic Energy Authority's production of 127g of 99.9% pure Protactinium-231 from spent nuclear material in a twelve-step process at a 1961 cost of $500,000. This endeavour is well known in the chemical world, as the UKAEA sold its stock off the next twenty years, presumably just undercutting Oakridge's current $280/g for many years. Exactly why the UKAEA went to all this trouble is unclear, but Sublette suggests that it was atomic weapons research. Her Majesty does not have a protactinium bomb, and we now know that such a thing is impossible. But it seems as though it would have been on the table in 1950.

The first transuranic element to be synthesised, at Berkeley, was neptunium, publicised in 1940. A certain silence then fell over matters, as plutonium proved to be a very good atomic material indeed. Americium, element 95, was publicised in 1945. Curium was discovered in 1944 but only declassified in 1947, while berkelium and californium were discovered and published in 1949 and 1950. Sublette is unimpressed by neptunium, berkelium and californium, but skips right over curium. A curium-247 bomb would be expensive to make, but would be very small and last pretty much forever. Not exactly an alternative to the unsatisfactory uranium and plutonium in Teller's Classic Super? I did find some random guy on the internet (Reddit!) who is willing to go on the record and suggest that a curium bomb would produce 296 MeV per fission compared with 283 for plutonium.

So, maybe? Obviously it's not a way to save the Classical Super --that's what the Teller-Ulam design is going to do-- but it is, perhaps, along with protactinium, something on the table as the American nuclear community scrambles to save or condemn the hydrogen bomb.

It's also "likely," Sublette says, that there are other fissionable isotopes amongst the transuranic elements worth considering.

At this point I'm going to call it a day, because while this line of investigation does continue with the story of einsteinium, it was discovered in Ivy Mike fallout, so I would be getting ahead of myself.
Posted by Erik Lund at 6:39 PM