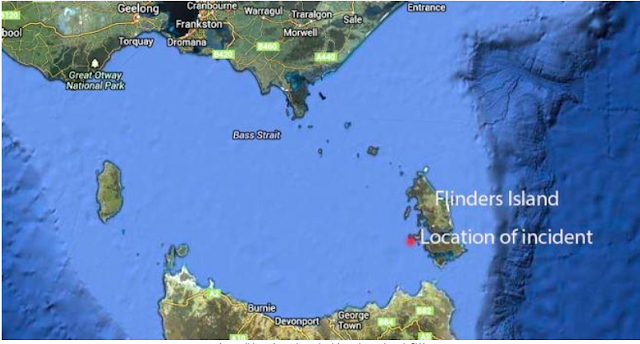 So, anyway, the well-known story has it that, eight thousand years ago (or ten thousand), the seas rose steadily one day, and the Aboriginal inhabitants of the Australian island and state of Tasmania were cut off from the mainland. Being Stone Age tribal people of the most primi-- Oh, wait, can't say that any more. So for the sake of the story, I am going to assume that you've heard that story about Tasmanians, and go from there. Point is, they were too primitive to have boats, 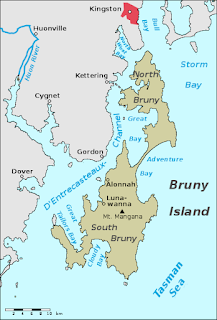 and therefore were cut off from the mainland forever after. Except for the fact that they were first contacted on an island off the short of southwestern Tasmania, so I should say, rather, that they lost the use of boats except for some boats. They had the kind of boats that allow you to get to Bruny Island, but not the kind  of boats you need to get to Melbourne.

Glad I could clear that up for you.

It seems more plausible if you haven't seen a map of the Bass Strait on a small enough scale to show the chain of more than one hundred members of the Furneaux group of islands linking Tasmania with the admittedly rural and un-Australian region of Gippsland, but even so it is scarcely an obscure and remote part of the world, considering that Gippsland officially begins at the edge of the Melbourne metropolitan area. (The map snip above conveniently excludes Melbourne just at the top of the bight. 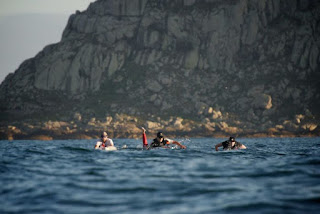 You have to wonder how a story like this comes to be told. Early mariners kept well to seawards of Tasmania, so it was not until Matthew Flinders and George Bass passed the strait in 1798 that British settlers on Australia, none too numerous and nowhere close, were even aware of the Tasmanian aboriginal populations of the area, and by the end of that year, at least I infer from a common ("in 1798" dating), sealers were active in the archipelago.

In short, no-one who had a chance to encounter and report on pre-Contact Aboriginal everyday life in Bass Strait waters, had a chance to do so, so bold claims about what kinds of boats they didn't have seem a bit premature.  I will now skip ahead to 1803, and the establishment of a British convict settlement on the island, to forestall possible French claims based on an extended recent scientific expedition. All of this first contact, then, taking place five years after completely unregulated everyday contact had been established between sealers and Aboriginals in the Bass Strait.

The received version of the history of aboriginal Tasmania is that the island had a pre-Contact population of 5000 or so, with some scholars at the peak of "high counting" days coming up with the dubious argument that the lack of genetic drift amongst Tasmanians after ten thousand years of isolation indicated a population closer to 100,000. This being based on the state of genetic science as of 1990 raises the interesting question of why more recent genetic testing has not resolved the issue, there not being any shortage of aboriginal Tasmanian remains in the world's anthropological museums.

The answer, it turns out, is that, for a people who went extinct more than a century ago, there are a lot of self-identifying Tasmanian Aboriginals, and more all the time. (It seems delightfully typical of the Murdoch press that the phenomena of more Tasmanians self-identifying as Aboriginal calls for a "probe.") The greater part of self-identifying Tasmanian aboriginals would appear to be descendants of sealer/Aboriginal families from the Bass Strait area, who might not therefore look phenotypically Aboriginal, and it occurs that both genetic and the notorious "paper bag" test might be more able to identify Aboriginal residents of Hobart with mainland roots than people with family lore of Bass Strait ancestry and membership in the various Palawa nations. 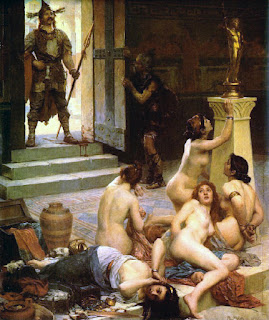 The story is further complicated by an obnoxious Victorian (not that kind, the other kind) reformer, who retailed lurid stories of sex slavery amongst the sealers to get permission from the colonial government to set up an Aboriginal reservation; which is itself the origin of the "extinction" narrative, since all the Aboriginals who ended up there, died. Of, we are assured by even some fairly recent voices, the classic trifecta of disease, degradation, and, I assume, drink.

In the introduction to Russell's Roving Mariners, she quotes a "census of the Chatham Islands (perhaps most famous for the "Brown people can be imperialists, too" narrative of Maoris versus Morioris):

"[a]t the present time, the islands are inhabited by as varied and motley an assemblage of people’s as can be imagined. There are Morioris, Maoris, Kanakas, Negroes, Chinese, Spaniards, Portuguese, Danes, Germans, English, Irish, Scotch [sic], Welsh, Yankees, a native of South America, a Manilla native, a Laplander, a Russian Finn, a half‑caste native of New Holland, several Maori half‑castes, and a few whose nationality it is impossible to determine,"

So that's your floating proletariat circa 1870. Aboriginals are conspicuously absent, and long before this the Bass Strait industry had lost its Gold Rush character and become one of settled communities exploiting local rookeries and carrying on side businesses in gardening and secondary processing. Russell conjures with "middle ground" models and proposes to dive into assorted post-modern technologies of knowledge to discover something deep about these communities.

I'm not sure that there is anything deep to discover here. I just wanted to point out a familiar demographic pattern of men from away and local women, with descendants a century on vehemently rejecting narratives of sexual exploitation. It turns out that this is not a narrative of ethnogenesis; the descendants of the Bass Strait community are reconstructing their Palawa identity and even language. in resistance to the modern Australian cultural hegemony --a plausible model, if you ask me, for the rise of Icelandic, and more especially, not that anyone has proposed it as  a problem needing solving, Azorean Portuguese.