You know what's a good book?

Even in 1944, they postblogged, and on Thursday, May 25, 1944, someone took time out to celebrate the hundredth anniversary of Samuel Morse's invention of the telegraph. It was not, of course, the date of the actual invention of the telegraph (1,2,3,4,5,6), but, you know, if you want into the American market, you're going to have to play by their rules, and one of their rules is that Very Important People get to take out patents on your inventions and take a licensing slice.

That's the hook, such as it is: Here's today's Secret Weapon That Won World War II (unpaginated, but p. 6): 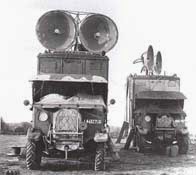 
The website, supported by the University of Bournesmouth, is nice, but doesn't really push us very far past Colonel Hickman's original description. We are looking at the broadcasting elements of a uhf pulse-modulated radio. The carrying signal is generated by a magnetron, representing a remarkable rate of improvement of a technology whose original handicap was that it could never be used for radio because of its inherent lack of frequency selection.

The very high frequency, especially for wartime equipment, gave the W.S.10 an inherently narrow beam, greatly improving security. This made it a line-of-sight technology, within the relaxed understanding of line-of-sight that radio engineers have. That is why the parabolic dishes are mounted on top of the trucks here. More usually, they would be erected on a 60 foot tower, giving a range of "around 50 miles," rather more over water. This was how forward headquarters on Normandy were able to communicate over 8 secure (under existing conditions) voice channels with Britain. That it was possible to do this tells you about how quickly wave guides were evolving under war conditions, and I will close this potted effort to single out just what is important and innovative in the W.S. 10 set by noting that it is a two ton apparatus that can easily follow an Army Headquarters around, and which needs only two portable generators. As Montgomery comes to trust it, he will increasingly rely on the W.S. 10 alone to support his forward headquarter's communication needs.

The W.S. 10 is all but forgotten now, crushed under the weight of publicity for FM VHF, which I would probably have touched on at greater length this week if I were doing a "technical appendix." It is, however, quite recognisable technology. The postwar microwave relay is not entirely indebted to the W.S.10, as the technology was already under development in the 1930s. However, in practical terms, we are looking at the contraption that is going to make the television network possible.
Posted by Erik Lund at 8:30 AM