Seventy years ago today, France is suffering under the Transportation Plan. In the course o this Plan,  60,000 tons of bombs will be dropped on 80 targets. Of this, 44,000 tons will be dropped by Bomber Command on 37 targets with 8751 sorties, losing 224 heavy bombers in the process. Eighth Air Force will fly 4462 sorties, drop 8000 tons of bombs, and lose 65 aircraft.(1) Twenty-six thousand French were killed in the process.

Some raids were more lethal to the hapless French than others. Fifteenth Air Force's raid on St. Etienne, on 26 May 1944, killed over a thousand civilians. Although ostensibly a daylight precision raid, bombing was delivered from over 13,000 feet, and this south-of-France target was ill-provided with bomb shelters --although Vichy observers also called out the "insouciance" of the inhabitants. Civil Defence officials blaming the victims, and an inadequate civil defence infrastructure? What a coincidence!(2)

Not to spoiler The Lego Movie or anything, but it turns out that the best of all possible worlds is one in a constant state of disassembly and re-erection. (As opposed to our modern world of slow nibbling around the edges.*) Blowing up the French was distastefully incidental to the project of creating a "railway desert" around the initial Allied lodgement, a project that has been a standard part of military planning since the Germans did it in their withdrawal to the Hindenburg Line. The thought is that with the Reichsbahn in terminal crisis --sort of like all railways everywhere by this point in the war, only worse-- this might have a useful knock-on effects. It will certainly help prevent the Germans from ejecting the Allies from the continent using their Mackinderish powers of land concentration, and, in any case, all modern railway bridges (and, in a wide belt across northern France, thanks to the aforementioned Hindenburg Plan, all railway bridges are modern) are prepared for easy demolition in the event of Boche outbreaks.

After that, though, the railways would have to be repaired.Fortunately, there's a plan for that.


It is also a plan that involves Brigadier Bruce White's Trn. 5 of the Transportation Directorate, the civil-engineering-bureaucratic-empire that the Bailey Bridge created, and it is in the same spirit: "some assembly required."126,000 tons of prefabricted railway bridge components will be manufactured and stockpiled in Britain, another 21,500 tons made in the US and shipped to Britain. Together, they will be assembled into almost 200,000 feet of rail bridging.

As the numbers intimate, American railway engineers are less enthusiastic about the project than Trn. 5. The idea, for example, of a standard trestle element using a "camel's foot" bottom so that it can simply be dropped onto an unprepared riverbed to make the supports of a hasty rail bridge is --it sounds more ingenious than steady, is what it sounds like.

For example, say that you've bombed the heck out of a good old fashioned masonry viaduct. Paraphrasing the immortal words of Chris Duffy describing the Venetian bombardment of the Parthenon, you've managed to add some Romantic colour and emotion to a stark old structure. Unfortunately, you now realise that you needed it for stuff. What's an engineer to do? 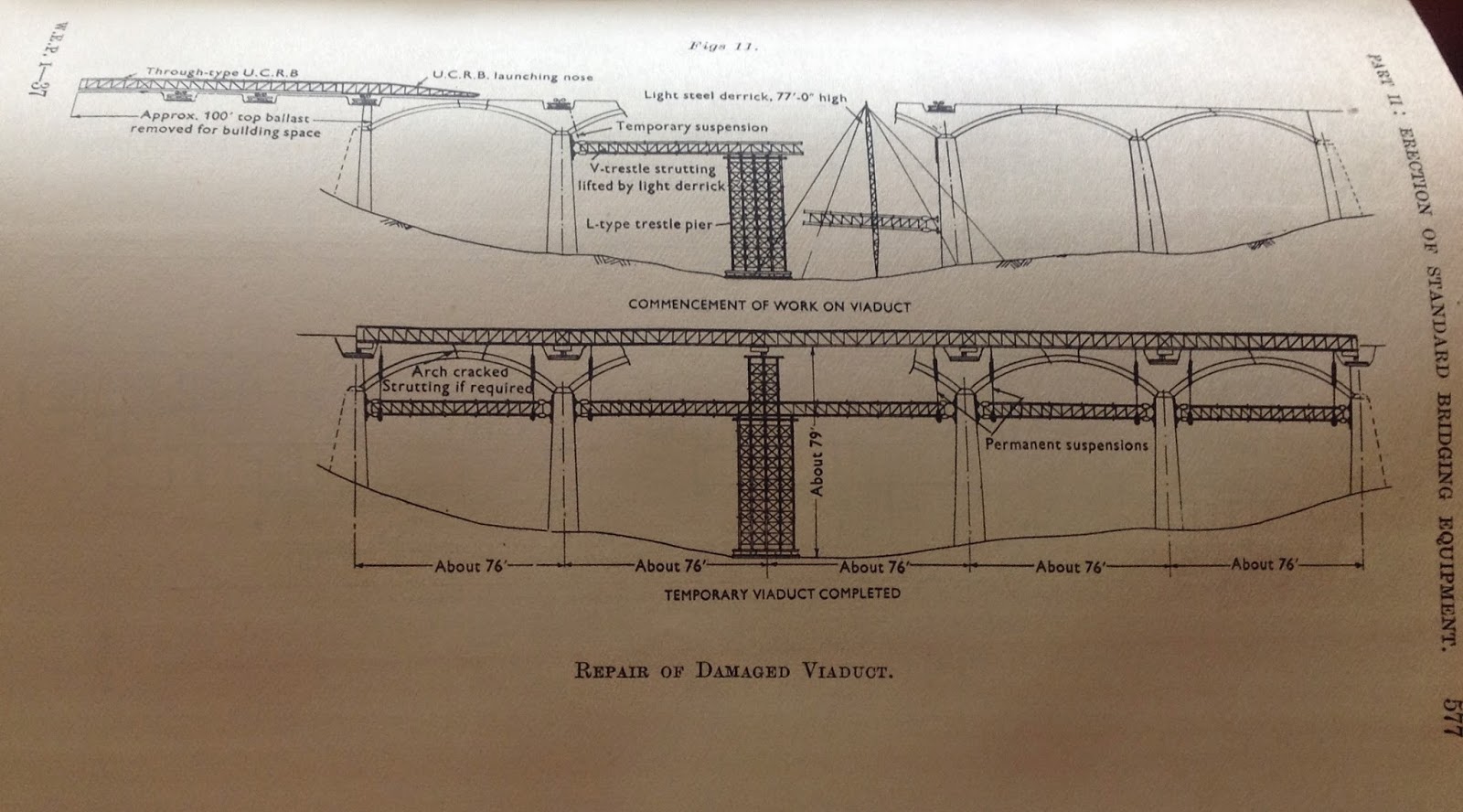 First, replace the lost mid-section with a new footing. Since there's no time to lay foundations in the river, that is where the "camel's feet" come in. With that absolutely top-notch, stable platform to work from, you put a modular lower bed in, just in case the masonry is about to crack and collapse. Then, you replace the lost railway bed itself that used to be on top. Then you tie top, bottom and "L type trestle pier" together with more standard elements.

I, personally, volunteer to not be the guy who drives the first train over. But that's not all! Consider the case where the original trestles are intact and the bed is completely gone. In that case, you just assemble a new bridge bed, put a "launching nose" on the end, and slide the multi-hundred ton structure of solid steel right out over the trestles and snug up against the other side. Instant bridge, easy-peasy! 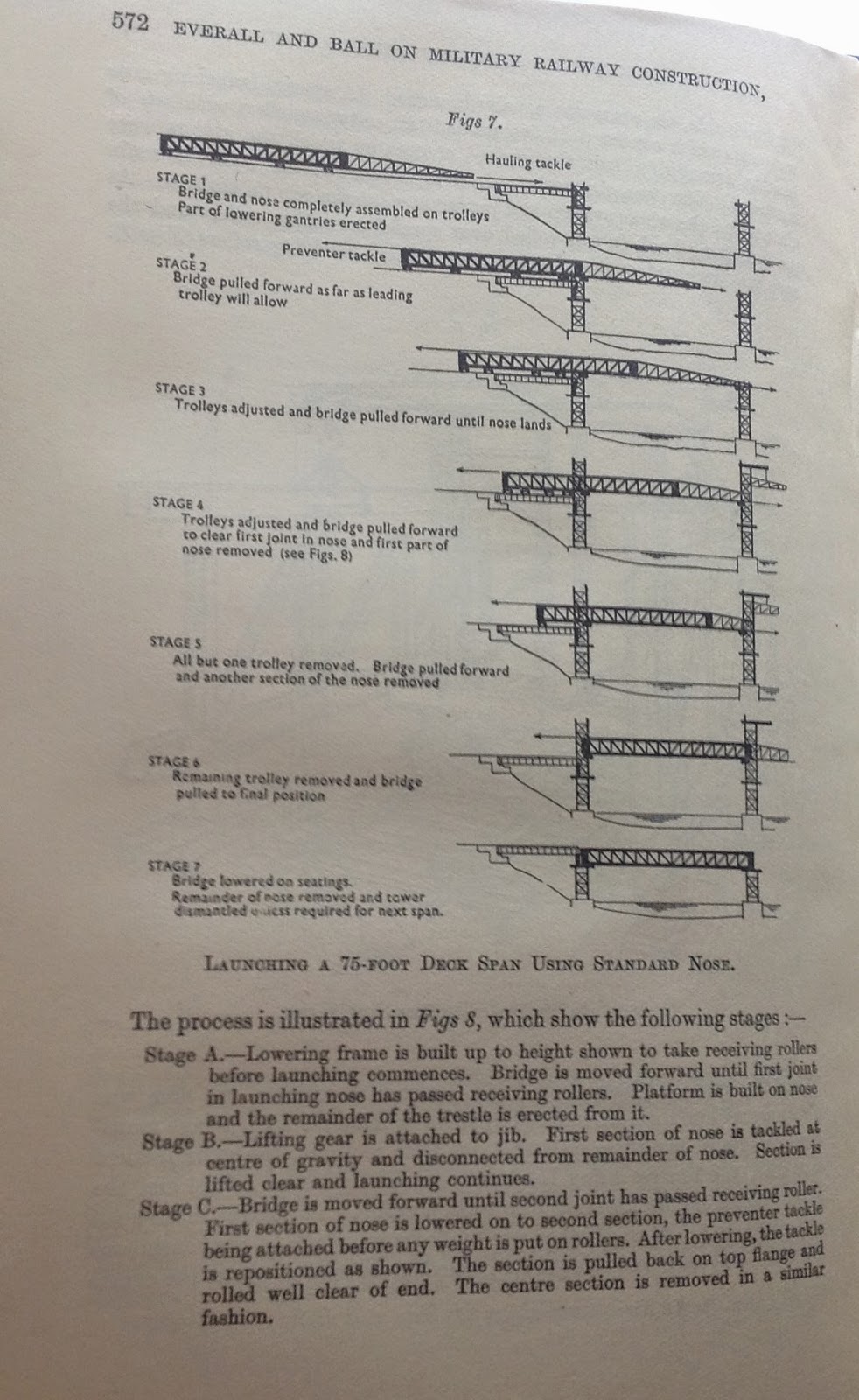 Perhaps not surprisingly, the Americans will begin using standard rolled-steel girders turned out by Luxembourgeois steel mills as soon as they can. But, first, the Allied armies have to reach Luxembourg. Until then, this whole invasion thing is erected on the ingenious visions of the creators for what might be done in practice with the standardised pieces now accumulating in the stores dumps of Old England.  The equipment has been given some field trials --the Southampton ramp shown at the head of this post is one of them-- it is not exactly a bridge over the river Seine. (3)

(1). Lacey-Johnston, Point Blank and Beyond, 163--5.
(2.) After scrounging around a bit in my library, I found the synoptic casualty total in Overy, The Bombing War (, which has settled low on my to-read list due to its high level of generality.
*What the hell happened to frozen spinach or penicillin? Why won't anyone take ownership of these shortages?
3. From W. T. Everall, "Military Railway Construction, Part I:General Design of Vaarious Standard Bridging Equipment [1: 513--562];" Everall, and D. A. Ball, Military Railway Construction, Part Ii:  Erection of Standard Bridging Equipment[1: 563--589];"  Everall, T. O. Cowan and F. W. Butler, "Cross-Channel Ferrying of Locomotives and Rolling Stock," 2: 187--210." All articles in Civil Engineer in War.
Posted by Erik Lund at 2:09 PM