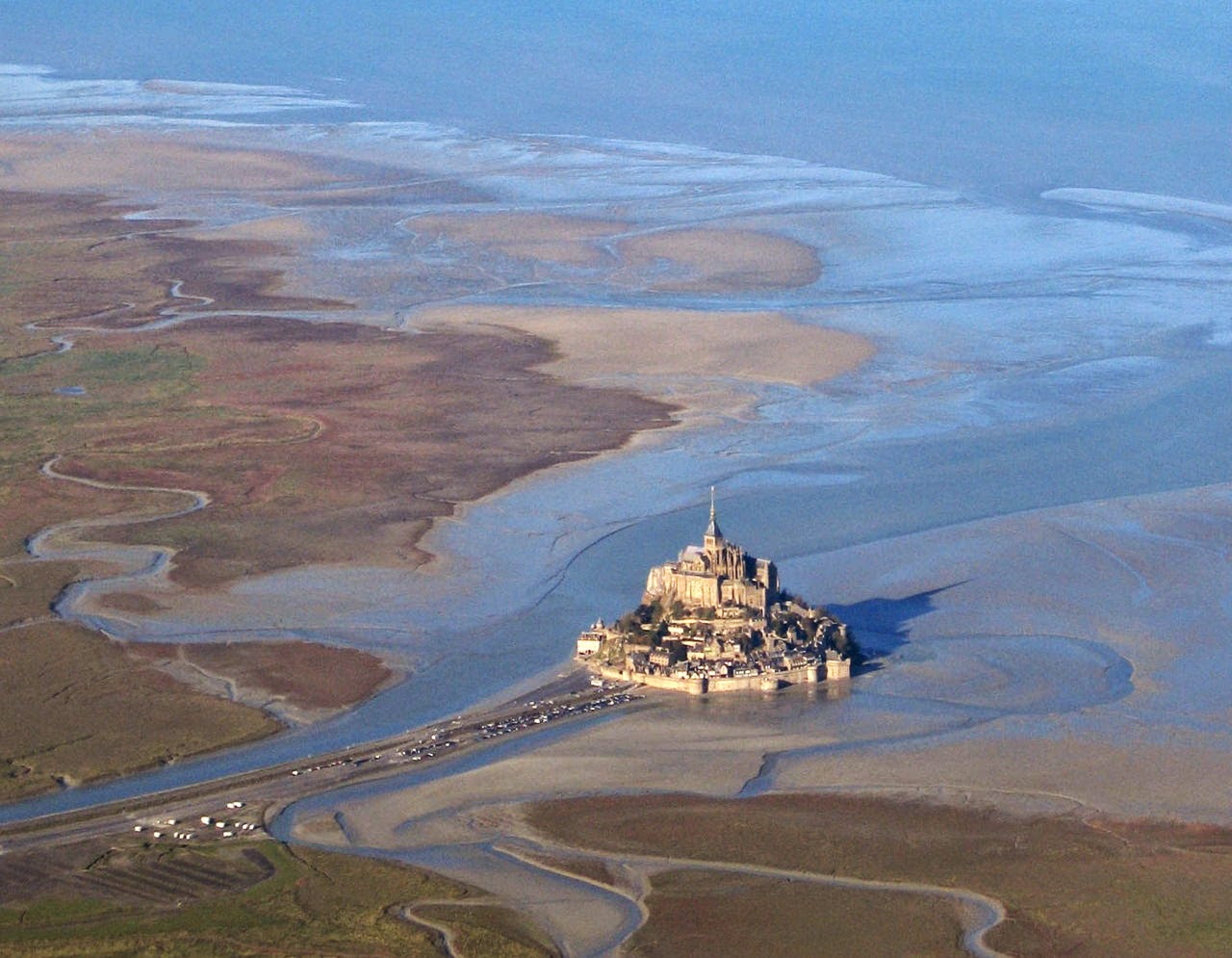 Normandy is a coastal Atlantic region. Great tides meet a low coast here, and the result is St. Aubert's monastery, erected, Wikipedia tells me, in 709. It is interesting that it postdates Lindisfarne (though not Saint Honoratus's prototype*), and for that matter Selsey, which gets less press, something that probably pleases Allied intelligence this spring of 1944, as there are some very odd devices resting on the bottom of Selsey Bill right now.
But we'll get to them later. For now, let's look at the consequences of  high tidal variation.


The Bay of the Seine, where the invasion was to take place, is characterized by flat sandy beaches, with an average slope of 1 to 150 feet, and an average range of 21 feet between high and low tides. The duration of high water is about 3 hours. A tidal current runs parallel to the coast, at about 3 knots. A series of low sand-bars, also parallel to the beach, exists in the tidal area, with the runnels between them attaining a depth of as much as 5 feet.


A shallow beach is not just arcane sailor talk. The sailing directions for the Bay of the Seine just talk about foul ground within a mile-and-a-half of the coast. Stay away if you don't know what you're doing. (If you do, between the "runnels" and dredged channels, you can approach the river mouths and take a coaster into the Seine, Orne, or other, smaller rivers and creeks.) Do not forget that a current of, in some places, 2 knots or more, and an onshore wind will push the water up still further! Vessels with low freeboards are going to have their difficulties if the seas are running too high.

Here's a colourful, modern version of the Admiralty Chart of the area of Arromanches-le-Bains that I have ripped from a Crown website: 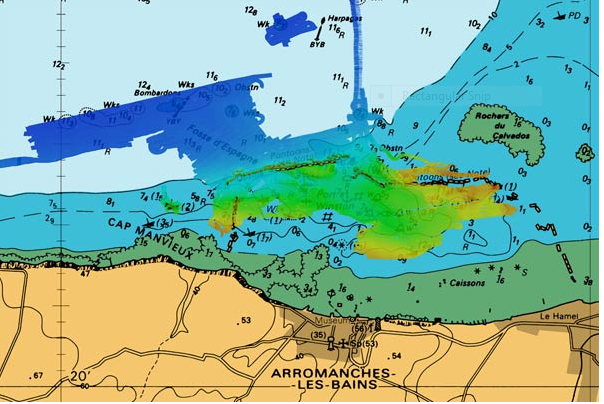 You get a very clear idea of the Calvados Shoals, which will prevent vessels from approach the coast at slack water. On the other hand, they give a measure of protection against onshore swells. Operationally, a high tidal variation also varies the amount of beach available. That is something that could be kind of important if you're trying to find a place to put stuff. Unloading ships requires a place to put things once they've been unloaded. A tidal beach is bad for that, at least if you want things to stay dry. The higher the tide (and remember that onshore winds can drive it higher), the less room for depots.

Another thing that kind of stands out is that lighterage operations are going to be very difficult on this coast. Lighterage is when ships anchor offshore and unload into boats. It is more common in undeveloped parts of the world than in Europe in 1944, but Venice is a famous lighterage port, and its gondolas originated as lighters (for "lightening" ships) before they became better known as tourist attractions. The problems with lightering at Normandy are two: first, the lighters will have a long run to and from the ships. Second, it will be hard to unload them on land, since the amount of land varies so much from one time of day to the next. The United States Navy has developed several kinds of militarised lighters (1,2,3), of which the least famous is, as so often, most important. For that matter, Landing Craft, Tanks, although built in large numbers, are not going to be very useful for anything except as lighters because they are ill-equipped for the long Channel crossing. Galley and head space may not seem very important in the grand scheme of things, but you don't want to be one of those coaches/employers who thinks that  refusing to recognise human weakness, will cause it to magically go away.

If LCTs and even smaller ilk, are problematic cross-Channel ferries, at least they can be used for lighterage. Unfortunately it is not clear how useful any lighters are going to be unless something dramatic is done about the beaches. Lighters need space, too! An unknown naval officer is said to have said that the "only thing that will do is to tow the beaches across already assaulted.")

*Note that Honoratus founded Lerins at a time when Arles aimed to be the western Constantinople. The obvious question is: what was going on in Normandy in 709? The answer seems to be "Norman invasion Vikings la la la." Which would be a great deal more satisfying if we had any evidence that Rollo was a Norseman. Dudo of St. Quentin certainly makes him a Dane, but Dudo knows surprisingly little about a man who after all died almost a century before Dudo wrote, and the historian's grip on the identify of Rollo's wife (probably more important to the story than Rollo, given her  high birth) is nonexistent. Such contemporary texts as we have (and they are few), make Rollo a leader of river pirates. At this the historian waves in the direction of the historical linguist and infers a migration not attested in the literature. That we cannot get at such a significant demographic change in the post-Carolingian era is odd --even Francois Neveux, coming down on the side of the received version, remarks on it-- but there you have it, Norman towns with Norse names. Must have happened. Now can we move on to talk about how the crown has to give us aristocrats more stuff on account of our being descended from Norman invaders? Have I indicated an interest in stories of language change that do not entangle ideologically-convenient migration stories? As Neveux notes, towns with "Norse" names almost always have technological roots: they are "fishing towns," and sites barely occupied before this period. (56)
Posted by Erik Lund at 10:55 AM

Email ThisBlogThis!Share to TwitterShare to FacebookShare to Pinterest
Labels: D-Day, Pirate History of the Atlantic, Seventy Years Ago More-or-Less Today