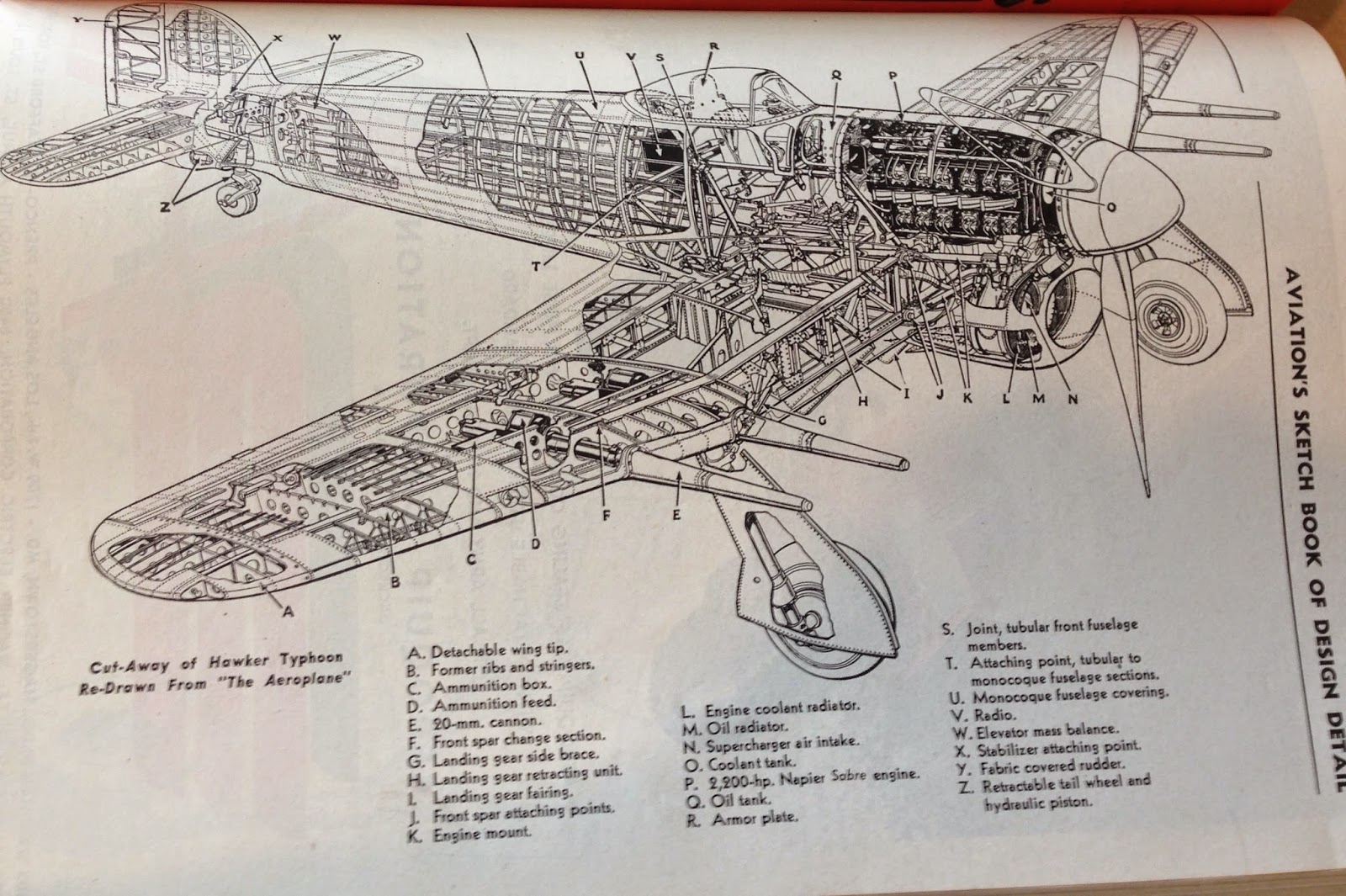 Here, just to get it out there, is a Hawker Typhoon. Powerful, menacing. Even the radiator is massive, and, of course, there are the four 20mm guns. If you're reading your way, day-by-day, to D-Day, you know that this is already old news, that there is a Hawker "Tempest" out there. The details, you are sure, are irrelevant. This is a hot ship, the kind that you want flying "cab rank" over you.

This is not a hot ship. It is a clapped-out Spitfire V, the kind chased off the continent by the FW190 back in 1942. Just to complete the degradation, the fitters are men of VS-7 Squadron, who usually worked with the floatplane spotters that operated from United States Navy cruiser and battleship catapults.

The old race horse put in harness beside the nag is just as much a nag. It just has bitter memories of glory to keep it going. Normandy, it has been decided, is not a place for floatplane spotters, so some Spitfire VLFs were handed over to the United States Navy and the Fleet Air Arm.

The question no-one ever asks is: why?

Yesterday (which is a few minutes ago for me, since I am not going to have much time to write tomorrow), I talked about the unmentioned miracle of D-Day: the extraordinary degree of success that the Allied armies had in penetrating the German defences along the coast of Normandy on June 6th.

We can acknowledge, of course, that this was not one of the Germans' stronger defensive positions. I talked earlier about the standard defensive position that had evolved during World War I: a barrier line to hold up the advance; a forward, "outpost" line intended to cover the barriers with fire and prevent their lifting; a Main Line of Resistance to hold enemy penetrations short of --the main meat of the defense, the artillery area.

The Normandy defences had no Main Line of Resistance. Rommel thought it would be a waste of resources, given the strength of the natural barrier line that Nature had presented the German defenders with; the sea itself. Instead, efforts were made towards putting the artillery in self-defending positions. Some of those strongpoints were so close to the sea that they were attacked on D-Day itself: Hillman behind Sword Beach, and the Merville and Pointe du Hoc batteries, both taken by air landed troops in coups de main. The artillery is intended to kill the men help up by the barriers. By and large, the barriers worked, to the extent of holding troops on the beaches for several hours. Although observation was problematic, preregistered fire is always possible. It is hard to believe in the sinking of an LCA of Company A, 116 Regiment, 1st Division by four 50mm mortar rounds without preregistered fire on a water obstacle. That is not the kind of work that a 2" mortar is normally called upon to do!

Behind Omaha Beach now lay the five artillery battaltions of 352nd Infantry Division, ready to do the same work on a grander scale. They did not. People talk about the execution wrought by the machine guns of the outpost line at water's edge, not about the killing done by the artillery.

Where was the German artillery on D-Day? The answer, I think, is that it was disrupted by the initial bombardment. The naval guns get their credit for close support, but the rocket barrages are dismissed as more spectacular than effective, while the prelanding carpet bombing by strategic bombers is usually described as falling on the wrong targets and largely wasted. We don't know that. We just kind of assume it. (And in the face of the actual "moonscape" of Pointe du Hoc, a metaphor that is usually an exaggeration, but which in this case is frighteningly real.)

All the explosives dumped on the Germans on the morning of 6/06 do not, after all, have to kill Germans. It is enough that they disrupt them, break wheels, block roads, jam trains, and, of course, disrupt communications. There are delicate crystals to be knocked out of tune, cables to be cut. The very air can be loaded with precipitation static-inducing dust. Radios, we are told, "didn't work" on D-Day. Except when they did, of course. Foward observers going in on land were trained Morse operators, and often got hold of their ships that way, using HF equipment when VHF talk circuits (especially FM in the case of the US Army's new "walkie talkies") could not punch through.

All of this was of little value to a Spitfire, chosen to spot fire at 6000 feet, or as low as 1500ft, because its pilot is at the controls of a plane that is fast enough to get out of trouble. Two hands on the control stick at speeds approaching 300mph are two hands not operating a W/T key.  The answer has to be VHF radio voice control of naval fire that will be reliable in spite of the difficult radio spectrum conditions that will be encountered. Without this, naval gunnery cannot fire effective counterbattery missions inland. So we can only stare in wonder at the transition, in four short years of war, from the TR.1133 introduced in such haste during the Battle of Britain, which squeezed out 4 voice channels at 100--120MHz on 74lbs and 1.37 cubic feet of volume installed and 280w power required to the T.R. 1407, working on the same frequency band on either am or fm, 57lbs on 1.37 cubic feet, taking 300 watts to deliver 336 available voice channels!* It has "automatic" "remote control," too.

Four. Years. We keep talking about close air support in terms of doctrine, as though the only thing holding back "fighter bombers" in 1939 was something called "doctrine." I understand that. "Doctrine" is far easier to talk about than electrical engineering. But our world changed on 6/06. This is hardly the only example, but it is kind of a telling one, even if the connection implied by the bibliographic cite is overwhelmingly more likely to be coincidental than familial.